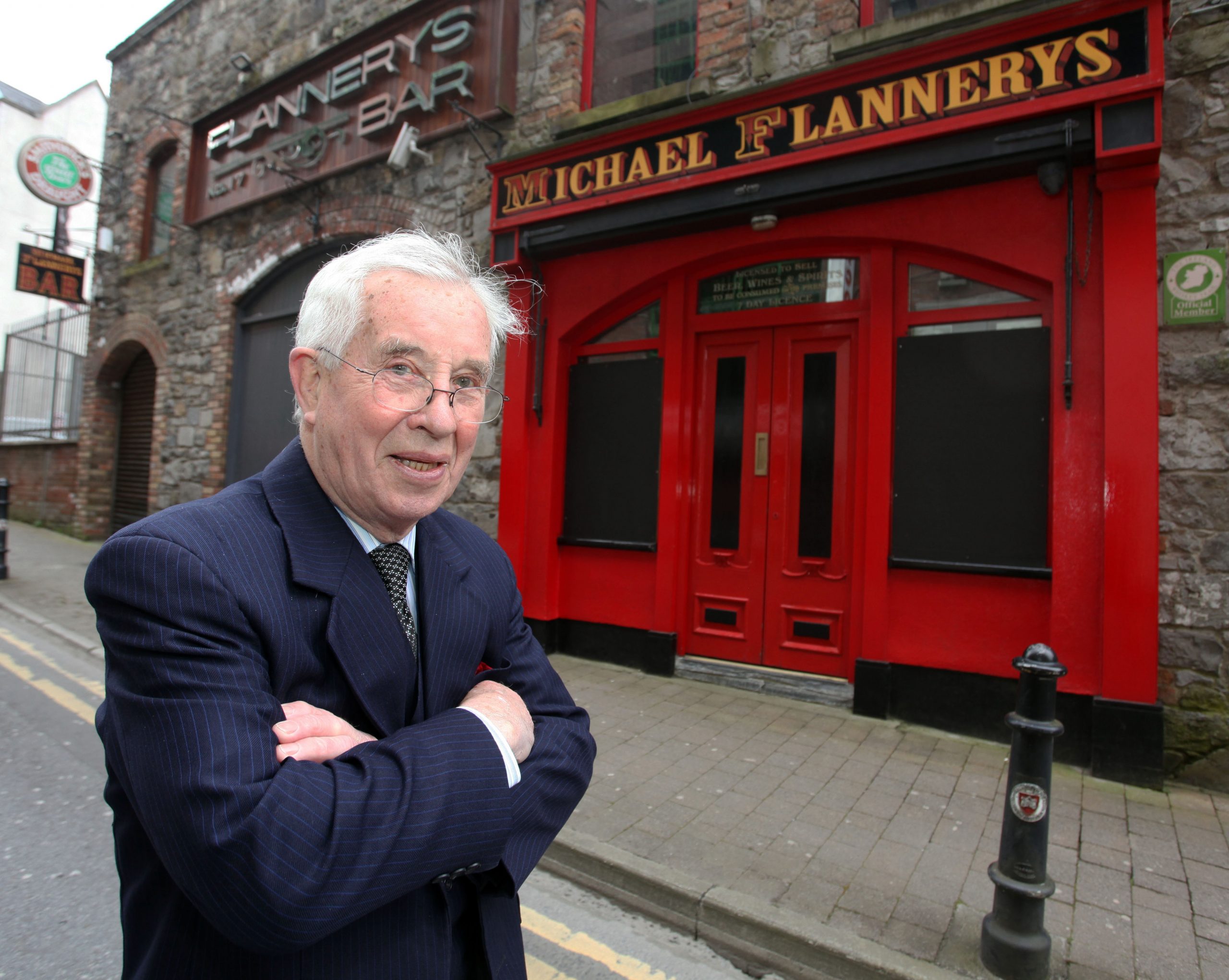 Not even lockdown has stopped one of Ireland’s oldest publicans, Michael Flannery, from going to work every day.

The 88-year-old has been working as a publican in Limerick for almost 62 years and continues to go to work daily despite the doors of his Denmark Street establishment remaining shut.

“It’s great to have someplace to go into when you come into town. I do say you can learn something new every day if you want to, but some people don’t want to take it in, that’s the way I see it.”

Flannery’s is a name that is now synonymous with pubs in Limerick – there is currently six bars in Limerick owned by the family, but it was Michael’s grandfather, William Flannery, who opened the first Flannery’s pub in 1898 in Rear Cross, Co. Tipperary, and Michael entered the ‘family business’ at an early age.

“I had an uncle, who owned a bar on Patrick Street years ago called Hogan Stand. I used to help a bit there for matches and things. Little did I know I’d stay at it and own a couple of pubs.”

The grandfather of nine says lockdown has been tough, but he has enough experience to know that things come back around eventually.

“There’s always a turning point. I have seen quite a lot of lockdowns, tough times, high unemployment, high interest rates and okay its tough, but after a time it comes back down.

The father of three grew up on a farm in Annacotty, the second oldest of nine siblings – seven boys and two girls.

Of the seven boys, six went on to become publicans, the other took over the family farm.

Michael did an apprenticeship in The Palace Bar in Dublin in the late 1950’s before returning to Limerick pub scene in 1959, leasing Houlihan’s bar in Wickham Street.

In 1963 he purchased part of Finn’s hotel on William street, where he stayed for 44 years before moving to the current premises in Denmark Street.

“I looked at several pubs and my bank manager came in one day and told me Flynn’s hotel is for sale and asked will we look at it and I said, ‘we would.’ – the rest is history.”

“When I think of it now, he was doing far more for me than I was able to do for myself.”

“You had three or four banks in William Street at the time and that drove people into the city every day, and you would always get people in for a drink but that’s all changed”.

Michael says he has seen many changes within the industry over the years explaining that he even used to bottle his own Jameson whiskey and Guinness stout from the cask until the mid-1960’s when the practice of distilleries supplying casks stopped.

However, the well-known publican gave up drinking alcohol a few years ago on advice from his surgeon following hospitalisation with seven ulcers.

Despite all the changes within the industry, Michael has been able to adapt to the times, but he credits his location and his family as much anything else.

“I’ve two sons and a daughter, she has her own business in Ennis, and the three of the have been very good to me and to their mother. My wife is still with me after 58 years.”

“Limerick has been very good to the Flannery’s. You’d often read about Limerick this and Limerick that, but we always got on well here, we were happy, and we got a good insight into Limerick.”

Liam feels that being a publican is something that comes naturally to the family.

“We just found something we’re good at and that’s it. Stick to what you know best, I suppose,” Liam said.