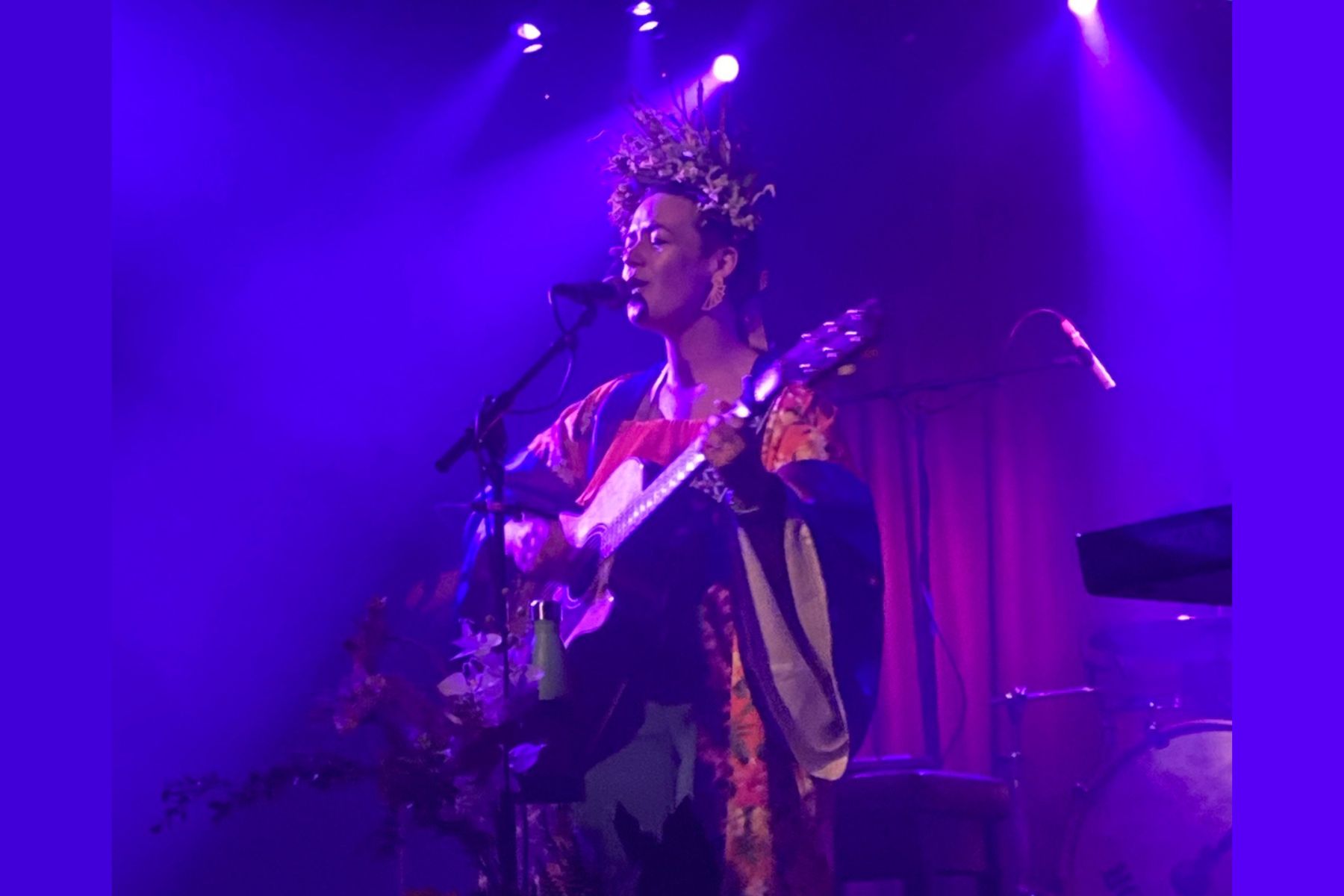 This past Friday saw Limerick gem Emma Langford return to the stage of Dolan’s Warehouse on her latest tour, following a performance in Cyprus Avenue, Cork the previous night.

Emma is a Treaty native with a BA and an MA from University of Limerick, who continues to live in Limerick and performs here regularly, always giving her all.

The gig was a mostly seated Dolan’s Warehouse event, with gentle strobe lights creating a sultry mood and a smoke machine giving an air of mystery and anticipation for the night ahead.

We’re first treated to young singer-songwriter Rachel Grace, who immediately began to play a keyboard. Within two notes, the crowd was in love with her voice and she continued to receive cheers of support and thunderous applause from the intimate number of attendees.

The Wexford native had the local crowd laughing when she casually said, “I knew I was in Limerick when I saw the word Gowl“.

Rachel has a rich, smooth, almost jazz-style voice. Her lyrics were captivating and simple, yet hard hitting, and included lines such as ‘It’s crazy the comfort you get from a scent‘. Her songs have a warm, familiar feeling without being cheesy or too mainstream.

The artist has a new single pending entitled ‘Rough Patch’, and hopes to release an album soon.

Then, the main lady herself entered the stage. Emma came out from the wings rocking a floral orange kimono and (like the queen that she is) wore a flower crown that was out of this world.

Needing the assistance of band member Hannah Nic Gearailt, she immediately stated that “The crown is going to be a problem”, which got the crowd laughing.

Emma kicked off the set with one of her uptempo songs, ‘Closed Book’, an excellent opener that revved the crowd up even more.

She shared an anecdote of developing vocal nodules at age twelve and having to go on extensive voice rest, leading her to write “a song for my younger self” – which then blended into “All You Want”.

Emma removed her elaborate flower crown to reveal a fresh, close-shaven cut by Limerick’s Niall Colgan Hairdressing, which has become part of her signature look in recent years.

The band’s cellist Dr Alec Brown played his own set, packed with sinister-sounding loops created with pedals and the side of his cello for percussion.

Emma and her band returned to the stage full of chat and jokes, which led to multiple whiskeys.

The song ‘Sailor’s Wife’ was dedicated to all the women in Emma’s life, particularly her mother, and she decided that she would sit on the edge of the stage to perform ‘Free to Fall’. The crowd was encouraged to join in, and rounded out the number together.

The artist then moved onto the song ‘Sowing Acorns”, also the title of her latest album, which was inspired by gifted oak saplings. She asked the crowd, “I live in a Limerick City apartment – what am I going to do with a bunch of oak trees?!”

The audience was treated to one of Emma’s most-loved songs, “Winding Way Down to Kells Bay”, which has great sentiment for the singer and fans alike, as the lyrics reach out, grab you and shake you back to existence, giving you a warm feeling deep down inside.

Before performing her last few songs, Emma took the opportunity to thank everyone who came along, her bandmates, Dolan’s for having them and everyone involved in the show and tour.

Shwe invited friends onto the stage to sing along to fan-favourite ‘Tug O War’. Rachel Grace returned to the stage and Emma relayed different harmonies to the crowd so that everyone could play a part in delivering the moving number.

After performing ‘Birdsong’ and a round of ‘Happy Birthday’ for her band’s bassist, Emma then revealed she had a treat for us and asked, “Can you guess the song?”

All of a sudden, a young musician named Fiona Kirwin entered the stage with a saxophone and hardcore fans gasped – knowing they were about to be treated to “Goodbye Hawaii” as Emma’s final number.

Emma gave it absolute socks, even pulling out her party trick – making the sound of a trumpet with her mouth (which ended up harmonising beautifully with the saxophone). Once she caught her breath, in true Limerick style she belted out, “Thank you – now feck off!”

Attendees were left floored, with overheard post-gig reviews including “I can’t believe how amazing that was”, “I’m so glad I came out” and “I’m so happy this was my first Irish gig”.

Emma hung around the Warehouse after her show to talk to those in attendance, and took to social media to share her gratitude to all who came down.

It was, all-in-all, a typical, good ole’ Emma Langford knees-up that left the audience in love with the music and always wanting more.