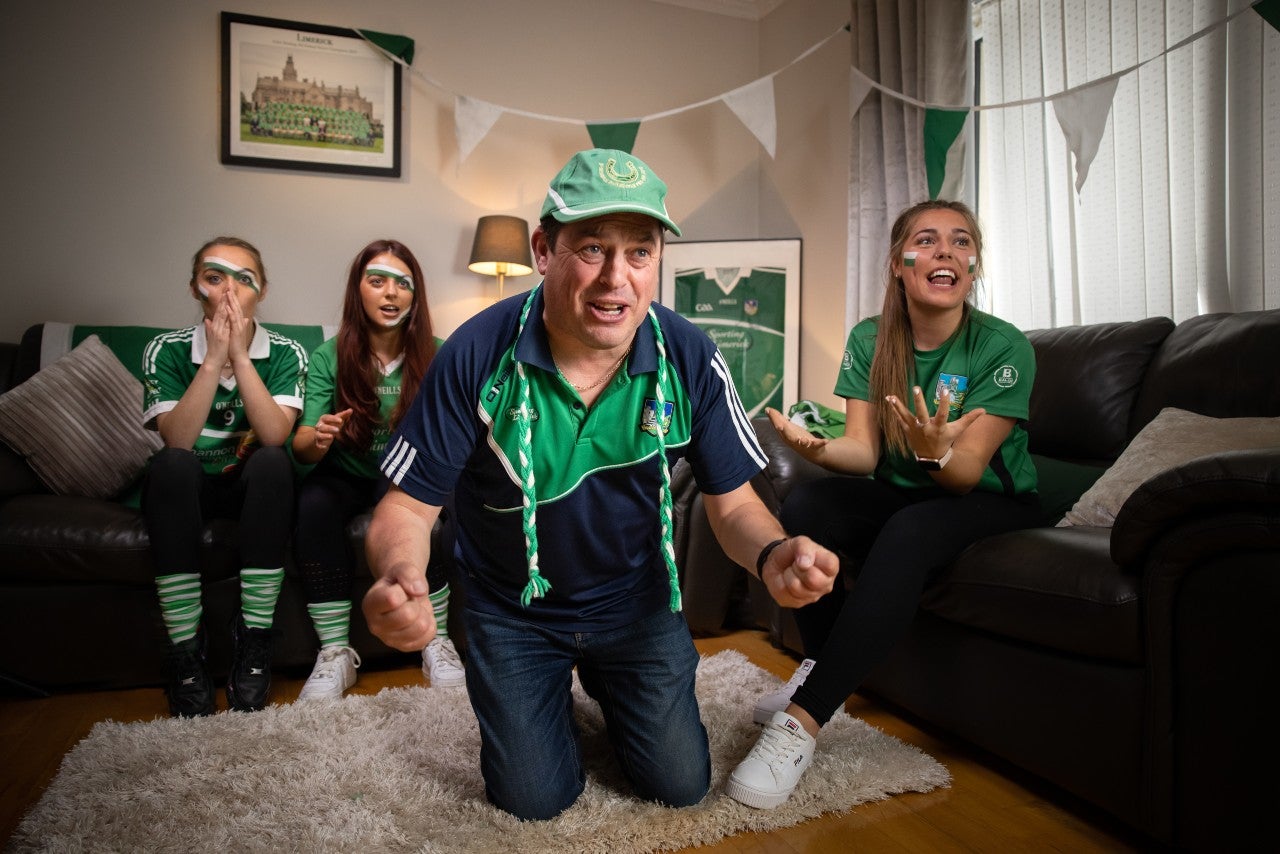 When lockdown meant he was unable to attend GAA games, Harry Twomey was forced to deal with the realisation that he would not be able to watch his county from the stands this year.

However, an opportunity arose when Bord Gáis were looking for passionate GAA families to take part in their new show called GAAGAABox.

On the show, GAA fans from across the country are filmed while they watch their county compete.

When Ahane GAA Club were asked had they any people who would be interested in taking part, they contacted Harry, who is a season ticket holder and travels to games across the country.

The Limerick man stated that he had a tough time convincing his three daughters: Aisling (20), Orla (20) and Cliodhna (18) to take part in the show.

He decided to give it a go and the show has been a success since, the second episode of GAAGAABox has racked up 85,000 views on YouTube.

The Ahane native has enjoyed the process of being filmed while watching his beloved Limerick.

“The whole experience has been very good. Bord Gáis have been very professional. Even with the COVID situation everything has been 100 per cent spot on.”

“It is only a bit of fun. I know it’s not for everyone but everything I have heard has been positive so far. I have watched the shows I am in and the ones I am not. Some people will be saying these lot are as bad as us or worse than us so for me it has been enjoyable.”

“I am the same when the cameras aren’t on me. I was watching the Tipperary-Galway game and I was enjoying that the same as if I was being recorded. It is a bit of craic and it seems to be bringing a bit of joy to some people.”

Harry admits that he misses the buzz associated with attending a knockout Championship as he has been unable to watch any inter county games with government restrictions not allowing supporters in to stadiums.

“It (lockdown) has been tough. I go to all the matches, minor, U21 and camogie. Cliodhna plays senior camogie for her club while she was playing underage too this year, so I was able to go as her guardian when we were allowed to do that.”

The Ahane man, originally from Meanus near Bruff is confident Limerick can progress to their second All-Ireland final in three years when they face Galway this Sunday.

“I’m confident enough. I think we will win. Our full back line has been disrupted by injury this year but I think we look strong everywhere else. It will be very tight though.”

He cites Limerick’s All-Ireland final victory in 2018 as his best moment following the men in green.

“No doubt about it that was the best moment for me. 2018 was unbelievable. I was sitting there crying while everyone was roaring around me. I couldn’t believe we had won.”

You can catch GAAGAABox here.