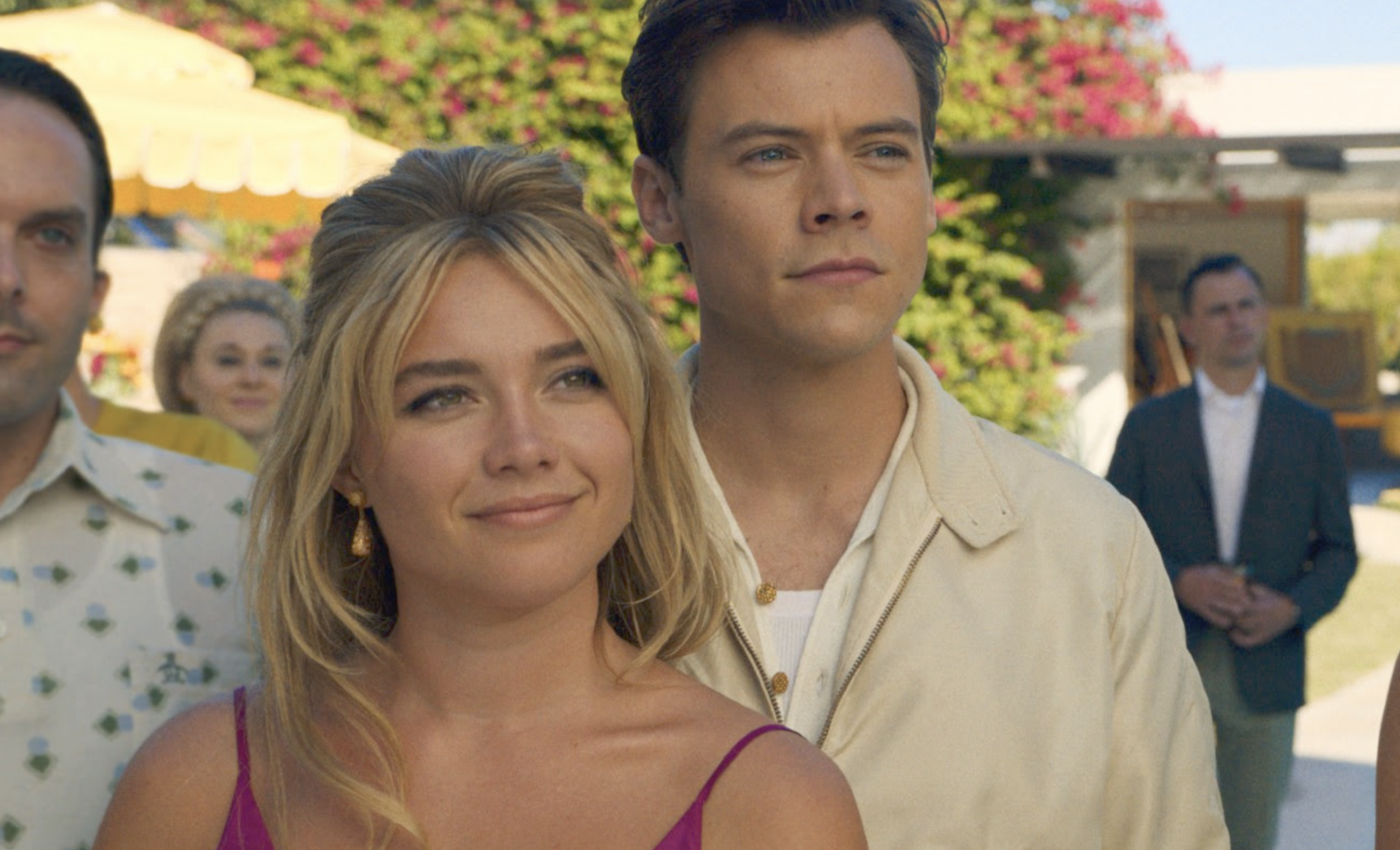 Don’t Worry Darling is one of the year’s most highly-anticipated films.

Surrounded in chaos and controversy from the start, much of the marketing for this film has been unintentional. The firing of Shia LaBeouf from the show’s leading role, director Olivia Wilde’s romance with replacement Harry Styles, and the rumoured feud between Wilde and leading lady Florence Pugh all grabbed public attention before the film ever hit theatres.

Less than a week after its release, Don’t Worry Darling has already topped box office charts, raking in over $19 million dollars in North America alone in its debut weekend.

The film begins by introducing audiences to husband-and-wife Alice and Jack (Florence Pugh and Harry Styles), as they enjoy a dinner party with friends and neighbours. Director Olivia Wilde makes her first appearance in this scene as Alice’s best friend Bunny, and remains a recurring character throughout the film.

In the 1950’s, Alice and her husband live in an enclosed village called the ‘Victory Project’. Nobody leaves the village – as it’s against the rules to do so. The men go to work, and the women stay home doing housework, shopping and mingling with neighbours. Everything seems perfect, until it doesn’t.

When a party takes place at the house of Victory Project boss, Frank, and his wife Shelly, it becomes clear to audiences that something else is going on in the picture-perfect community.

Chris Pine plays the ominous Frank perfectly, his performance adding a vital sinister undertone to the film at this early stage.

Kiki Lane’s stellar performance as Margaret is another key element in building eeriness during the first half of the psychological thriller. Speaking in cryptic messages, Margaret tells party goers they are being lied to. The delivery of the plot is well executed here, giving audiences just enough information to know something isn’t right, but withholding enough to keep us on the edge of our seats.

Leaving audiences unsure for so much of the plot is a dangerous move to make, but screenplay writer Katie Silberman and director Wilde make it work by dropping snippets of information through Alice’s chaotic hallucinations, a symptom of her deteriorating mental state.

The cinematography of Don’t Worry Darling is impeccable. In an unusual move, there are multiple shots in which characters look directly into the camera. These Watcher-esque shots are terrifying at times, breaking the fourth wall. It feels as though we as an audience are witnessing something we shouldn’t and there’s nothing we can do to help. In contrast, repeated shots of coffee being poured and men going to work adds a level of linear order to the chaotic film, only making it even more disturbing.

One of the biggest questions posed before the film’s release was, “Can Harry Styles really pull off this sizeable role?”

The answer, in my opinion, is not really. His character Jack is a complex and arguably evil man. While Styles’ comedic timing is great and he plays a loving husband well, when it comes to the darker, more emotional scenes, his acting isn’t quite there.

Another issue is that audiences struggle to take him seriously, with cinema-goers erupting with laughter during some of Styles’ most serious scenes. Yes, his status did wonders for the film’s marketing, however, his surface-level acting is having detrimental effects on reviews.

On another note, Florence Pugh’s performance is truly incredible. Her performance is effortless, but unfortunately this seems to have been lost in all the controversy surrounding the film. Don’t Worry Darling may do poorly in terms of nominations in the upcoming awards season, but Florence Pugh individually is more than deserving of a lead actress nomination.

The ending of the film leaves much to be desired, discrediting a lot of great early scenes. The cliff-hanger finish was a bold move that simply didn’t pay off. The rushed ending does build climax, but there are too many plot holes left unattended to. It gives the feeling that some unanswered questions raised with audiences are accidental plot holes, and not intentionally ominous.