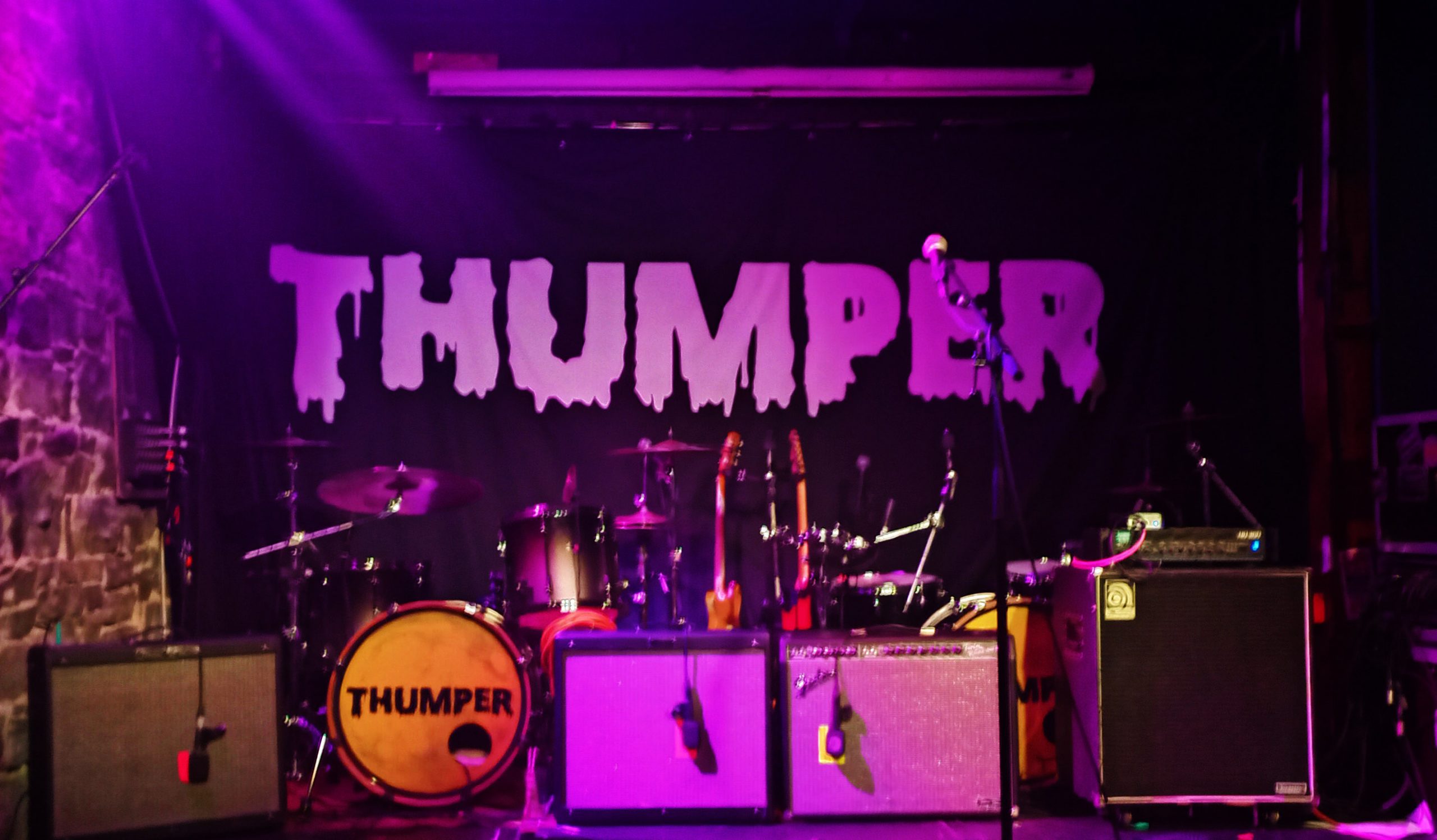 DUBLIN-FORMED SEXTET BRINGS THE HOUSE DOWN IN ECCENTRIC PERFORMANCE

It was never going to be a quiet night in Dolans, Munster won, so the rugby brigade was out in force, full to the brim in voice. The main stage was showcasing a Metallica cover band, so that meant next door into the narrow corridor of the Kasbah, was the real main show of the evening, the sextet of Thumper.

Not before the opening band, Floorshow, a Dublin Dreampop/Post-Punk outfit, after a 35-minute set fulfilled the opening act criteria, drawing the crowd in, building the energy in the room, but importantly matching the energy to the headliner.

Apart from the mic for the English vocalist, Jessica Howell, being faulty, the first impression of a promising act reminiscent of Portishead, when the acoustics held, unfortunately, seemed like an instrumental band if you shut your eyes for most of it.

Afterward, the stage turned pink, and the room was serenaded with classical music, calming the room until the storm arrived. The final classical piece ‘The Mountain King’ transitioned the room from tranquil to slowly building madness, and when madness was the setting, Thumper appeared from the crowd.

Requesting the room of over 100 to pack themselves at the front, Thumper poured themselves a drink onstage and after lead vocalist, Oisin Leahy Furlong toasted the crowd uttering “Slainte”, it began.

With 4 guitarists, 2 drummers, and the narrow walls, the opening track ‘Topher Grace’ lit up the room, all 4 guitarists in line, but not for much longer, with each slithering around the stage, as under the spell of their own energy as the audience was.

Furlong with the next track ‘25’ was bouncing around after every verse, death staring audience members with a motionless face while the rest of his body contorted while playing the instrumental section of the track.  Fellow guitarist Alan Dooley used this section to jump into the crowd, and made his way to the bar, climbing on top to perform the rest of the song, with the crowd turning their heads every couple of seconds in this 180-degree performance, as if they were watching a tennis match.

Finishing ‘25’ Furlong talked about Dolans being their last headline stop in what’s felt like a 2000-year tour, having performed the night previous in Dublin’s Whelan’s. Furlong said, “I haven’t showered since, and I don’t apologise.” with the band performing a new song, featuring a solo verse from guitarist Alex Harvey.

Through the new-untitled song, ‘Overbite’ and ‘The Loser’ the noise continued, Furlong jumped into the crowd and went as far as the cable would allow him, giving his guitar to an audience member while he went back on stage to sing the rest of it.

The night took a strange but delightful turn when Furlong announced that they were going to play a cover that they’d grown to enjoy while on tour. And so began the noise-rock version of Unwritten by Natasha Bedingfield, a fitting song by this point in the night with a room drenched in sweat, and condensation dripping from the ceiling. Making it appear as though it was rain that we were feeling on our skin.

Before they began the end of their set, with everyone being packed right up the front, Furlong announced to the sopping crowd, “This is a safe place, a place for you, me and all of us, a place for weirdos… now hug the person to the right of you for this last song”

With the performance of ‘Down’, bringing the gig to a close Furlong thanked the crowd, many of whom were seeing Thumper for the first time. Finally, the band said they will “See you next time in the big room,” in Dolans, and next time, based upon that performance, won’t be too far away.

Find out more about Thumper.