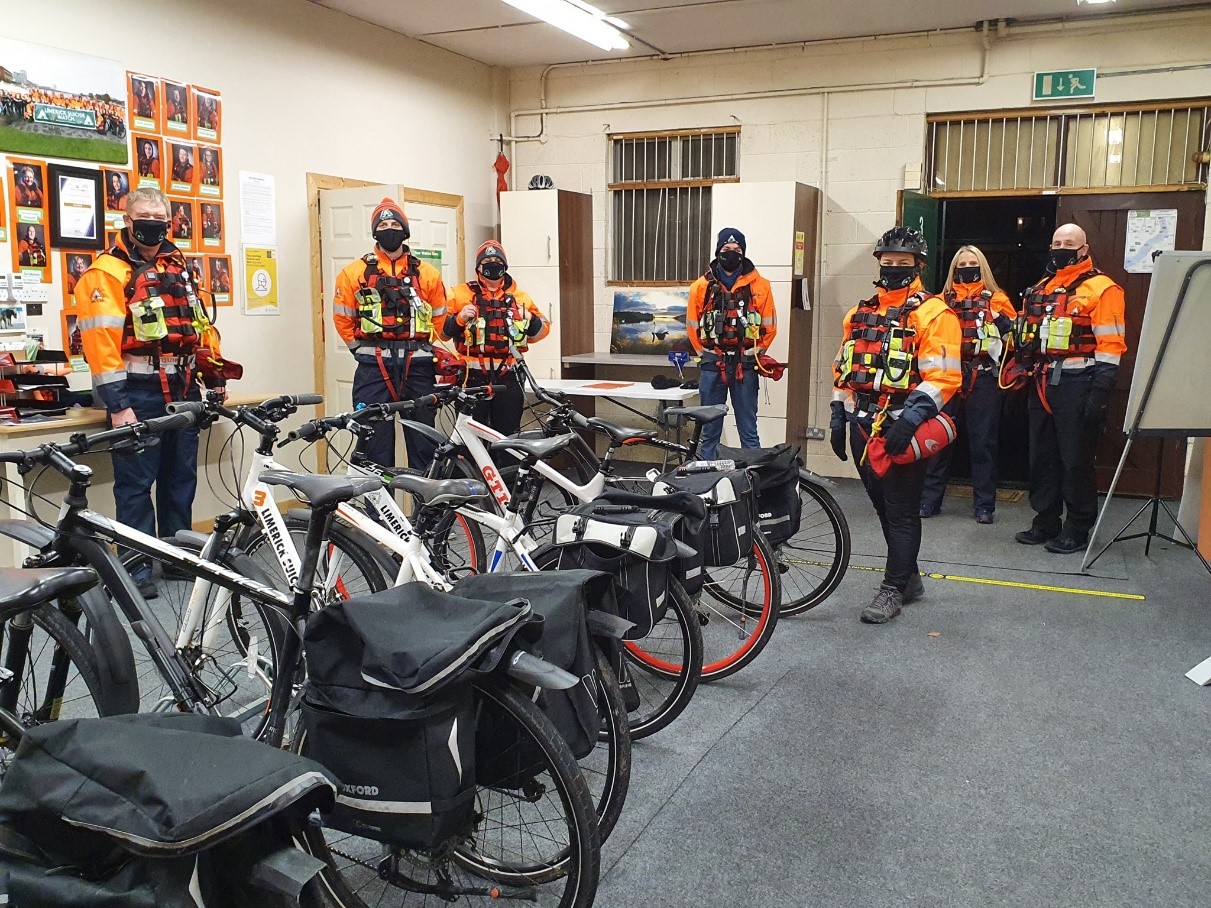 It’s approaching 9pm, and my phone tells me it’s -2°C outside – probably the coldest night of the year so far.

I’m sitting in the back seat of a van headed towards the river, with four other Limerick Suicide Watch (LSW) Volunteers.

There are others patrolling on bikes, who we will meet when we park the van.

Behind me are two seats facing eachother and a table, as well as tea, coffee, and biscuits.

I’m told that the van is especially designed to be a comfortable, warm place to talk should anyone need it.

The journey takes only a minute or two, and I spend the time thinking over the signals I had just been shown; two subtle movements which I may need to pick up on later, signalling me either to call the emergency services, or that someone is likely about to enter the river.

Before we left I was loaded up with gear (a hi-vis jacket, a throwbag, a radio, and a Personal Flotation Device (PDF).

My gear was checked, and checked again.

I was given instructions on how to use each of these essential items.

Once I had the hang of them, I listened to one of the volunteers, Noel, do some checks before leaving; revising the signals, assigning people roles, checking the radios.

After that, five of us headed to the van, and the others took their bikes and set off towards the river.

Noel parks the van and we divide ourselves into patrols; the bikes will stay together, patrolling a longer route than those of us on foot.

Noel, and the vice-chairman of the LSW, Ger, have offered to adopt me for the evening, and so the three of us begin by walking towards the Clayton Hotel, as the remaining volunteers cross the river and head towards the Treaty Stone.

Noel is ‘Alpha 1’ for the evening; he later tells me that this means he is responsible for informing the Gardaí and the Coast Guard that we are on patrol, and for overseeing the night’s patrol on a more general level.

Noel and Ger explain that for a speedy response, it is essential that there is always a patrol on each side of the river, and so we will be moving in a large figure of eight throughout the night.

Noel, Ger and I greet every single person we pass; most respond with a cheery ‘hello’ though some have headphones in and ignore us.

As we walk Noel and Ger talk to me cheerily, cracking jokes and laughing, often joking with those people who pass us by.

From the beginning of the night I was struck by how high-spirited the volunteers were; they spent much of the night laughing and joking with each other and the many people that we passed, brightening moods all along the river.

This was not to say that it was all just a good time for the volunteers; Noel’s safety briefing and our gear checks were performed with attentive faces and the utmost professionalism.

The patrols offer more freedom, however, and Ger tells me that it is important not to come across all doom and gloom.

“Sometimes a simple smile from a stranger is enough to make someone’s day,” agrees Noel.

We have reached the Clayton by now, and after patrolling along the river there, we cross the bridge and head down towards St Michael’s Rowing Club.

Noel and Ger tell me that the Christmas lights are a Godsend to them; they can clearly see the whole bank even from across the river when they are lit, though without them can be hard to see beyond a few metres in front of you.

I am told that the LSW is campaigning to keep them up all year round.

Occasionally, we stop and shine a torch onto the water, constantly checking to make sure there is nothing (and no-one) drifting along the river.

We continue along to the Strand, before radioing our fellow patrols to check their location, and then crossing the river to head to Arthur’s Quay Park.

The park is quiet at first glance, though as we begin to walk through we see a young man sitting alone on a bench, staring into the water.

We offer him the usual cheery greeting, but when he looks over at us and sees us he simply nods and looks away.

Such a gesture could be innocent enough, but Ger wants to make sure and approaches the man.

Within a few moments Ger has picked up on something.

The man has replied to him by saying “Sure, I’ll be okay.”

“If you will be okay it means you’re not okay now,” replies Ger, and asks the man if he needs to talk.

As it turns out, he does, and soon Ger is deep in conversation with him.

The man has recently broken up with his girlfriend and is also having financial trouble.

Noel and I keep a slight distance so as to offer some privacy and to avoid overcrowding him.

Noel tells me that “I’ll be okay” is a common enough answer from those who may be struggling.

Ger is a master at his craft, slowly putting the man and ease and letting him open up.

Noel radios the other patrol to let them know that we have stopped and gives them our location.

They radio back and let us know where they are and where they’re headed next.

Across the river, I spot the bike patrol hard at work surveying the river.

I take this opportunity to talk a little more to Noel about his background and his involvement with the LSW.

He tells me that has been with the LSW for just over a year now (by his professionalism in his role as ‘Alpha 1’ I had guessed it would be much more than this).

When I ask him what his reasons for volunteering were, he tells me that they are somewhat selfish; he had put in his time as a sports coach, and was now looking for a different positive activity to occupy his time.

He also enjoys the exercise and being out and about in the city. I laugh – Noel’s brand of selfishness is one we could use a lot more of.

As Ger delves deeper into the problems of the man on the bench, I ask Noel about a large stockpile of food and other essentials that I noticed at the base.

He tells me that the collection was organised by LSW and is intended to be donated to Direct Provision centres.

He says that the people of Limerick have always supported the LSW, and that they should be seen to be giving back to the community as much as possible.

I look at Ger, comforting a now-crying man, and I’m humbled by their view that they should ‘give back’ beyond their work on patrols.

We have been with this man for close to an hour now; it is past 11pm and people are few and far between.

I ask Noel how long these types of conversations usually last.

“As long as it takes,” he tells me, and it is evident that he means it.

He and Ger would stay all night with someone if necessary, and indeed have in the past.

But this time, it wont be necessary.- soon the man is on his feet, and Ger has him laughing.

The man agrees to head home, and we keep him company along the way.

Before we part, Ger gives him some last minute advice and some contact details should he ever need to talk.

Once he has returned home, Noel, Ger, and I cross the river once more and begin to walk towards the Treaty Stone.

Once we reach the stone, we meet two men who Noel seems to know.

They chat for a few minutes, and it soon becomes clear that the men are locals and regularly meet the LSW on patrol, offering an insight into any worrying behaviour they may have seen in the area.

As we are talking, I look across to King John’s Castle and see what appears to be a person climbing up on a railing over the river.

Ger and Noel have seen it too and so we hurry across the bridge to try and help.

As we approach it becomes clear that what we saw was in fact a collection of large balloons tied to the railing, blowing in the wind, and we all breathe a sigh of relief.

It is now approaching midnight, and we decide to head back towards the van for some hot drinks.

With impeccable timing, the other patrols radio and let us know that they have ordered tea and coffee from the Clayton.

Ger and Noel tell me that the local hotels have supported the LSW hugely by providing such drinks, as well as a warm place to talk to somebody if necessary)

A few minutes later we are sitting by the van, tea and coffee in hand, enjoying cake and biscuits that the volunteers had made and brought along.

We talk together about how the night has been. The other patrols have been relatively ‘peaceful’ (the ‘q-word’ is not to be mentioned), and someone comments on the fact that it has been a dry night so far.

Sure enough, within minutes there are some drops hitting our heads, though mercifully they do not last more than a few minutes.

Once we have eaten, the other patrols return to surveying the river, while Ger, Noel, and I take the van and drive to some more out of the way spots close to the city.

Every now and then we park up and head out to check the river with torches.

Ger and Noel are well trained; several times I do not notice objects in the water until one of them points them out.

Once finished with these more secluded spots, we return to the city centre and pick up the other patrol on foot, before radioing the bike patrol and letting them know it is time to return to base.

It is 1:15am when we pull in to the LSW parking lot, and we are grateful for the wave of heat that greets us when we open the door and head inside.

After a debriefing, we remove our gear before disinfecting it and separating it from the unused gear.

Noel goes to each of the volunteers and ensures that they are okay, and that nothing from the night has disturbed them.

He and Ger also check with me that I am okay, and everyone asks if I have a way of getting home safely.

At around 2am I clamber into bed, exhausted.

Thinking back over the night’s events, I am struck by so many things, but chief among them is the sense of community that greeted me with every step on patrol.

It was inspiring to see the volunteers interact with every single person they met; laughing, joking, chatting.

I think of the two men by the river who would share information about worrying behaviour, and the local hotels offering tea and coffee; I think of the man on the bench, now safely tucked up in bed like me, and the food stockpile intended for donation to Direct Provision.

And I think that over the course of one night I have seen the very best of what Limerick has to offer.