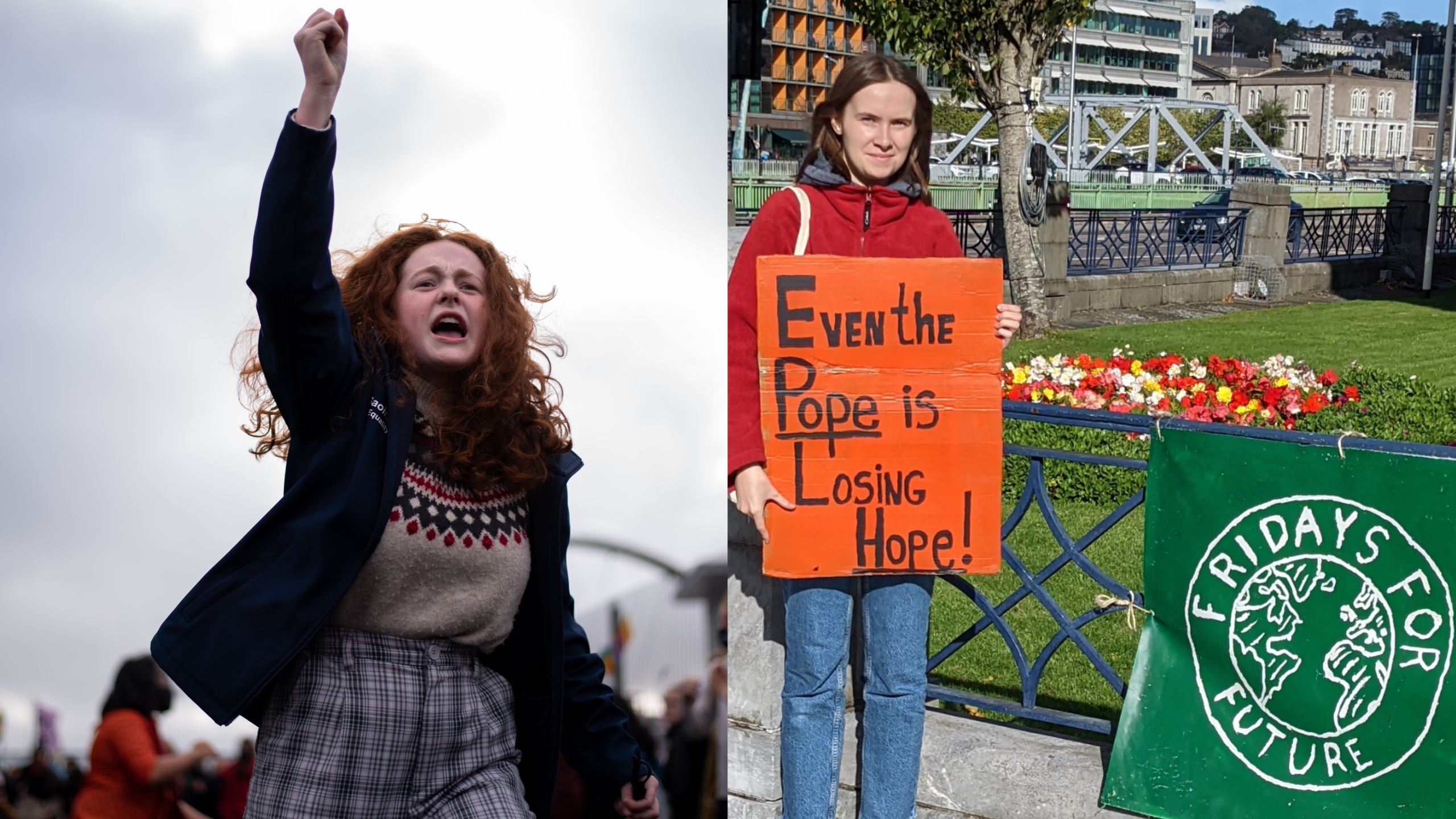 Limerick Voice sat down with young Limerick climate activists Saoirse Exton and Iona Logan to get their thoughts on COP27, handling climate anxiety and what makes them hopeful for the future

“If this generation doesn’t step up urgently, future generations will not forgive us.”

These were the words of Taoiseach Micheál Martin during his speech at the COP27 climate summit in Sharm El Sheikh on Tuesday, November 8.

The Taoiseach expressed concern for countries most affected by climate change and pledged that Ireland would double its climate finance fund to €225 million by 2025. Critics have pointed out the irony of his impassioned speech, as Ireland’s emissions continue to increase.

Iona Logan, a young activist from Limerick, is involved in Fridays for Future and other climate campaigns. She understands why many people have chosen to avoid this year’s United Nations climate conference.

“Lots of people I know who were at COP26 were very disheartened by the way that young and indigenous people were excluded, or just tolerated. Greta Thunberg says she won’t go to COP27 this year, because she sees it as a forum for greenwashing. Protesters are allegedly going to be cordoned off, far away from the main talks.”

This year’s conference is being held in Sharm El-Sheikh, a remote Egyptian city. Its inaccessible location is one of reasons people have chosen not to attend. In recent weeks, prominent climate advocates have criticised Egypt’s human rights record, which often sees dissenters and journalists jailed.

As Iona explains, “I don’t think people are too hopeful that this COP will have more diversity and inclusion, because Egypt has such a poor record in terms of human rights.”

Saoirse Exton, who set up Fridays for Future Limerick in 2019, also chose not to attend COP this year.

“I’m not going to COP this year because of being in sixth year, but one of the other things that really influenced my decision was where it’s being held.”

The secondary school student is the only Irish person to have won a prestigious RISE scholarship for her climate activism.

At the age of 11, Saoirse was inspired by activists calling for the repeal of the Eighth Amendment. “I remember seeing all these people involved, and I thought, ‘Wow, this is a thing you can do.”’

Both Iona and Saoirse have found that climate activism helps to alleviate some of their anxiety about climate breakdown.

“I can certainly tell you that eco-anxiety is very real,” says Iona. “Among the people I have met through climate activism, many are very anxious about it. Some have family ties to countries like India, where temperatures are making life extremely challenging. Or they speak of the recent floods in Pakistan which affected 30 million people.

“Even young people I know who are not climate ‘activists’ speak seriously about their fears, many say they will not ever have children because they believe the world is facing such an ecological crisis.”

Saoirse has seen a rise in climate anxiety among young people: “As people gain more of an understanding of the severity of this crisis, naturally they’re going to feel anxiety. It’s terrifying. It is a very, very scary concept.”

Politicised international climate conferences like COP clearly do not inspire confidence in these young activists, but does the Irish government?

In his COP27 speech, the Taoiseach also stated, “It is realistic for our legacy to be a sustainable planet…We in Ireland will do everything in our power to bring it about.”

However, Saoirse is critical of the government’s inaction. Last year, she met Minster for the Environment Eamon Ryan, who assured her that ‘it will get better’ – but she is not convinced.

“The Irish government has no intention of rocking the boat at all,” believes Saoirse. “I feel like they often overestimate their own weakness. You see other small countries, like Costa Rica, who have dissolved their entire military to fund climate action. So you know there are things that small countries can do, especially a country like ours which has such potential.”

For Iona, the government’s biggest failure lies in communication.

“I think where they are falling down is in communicating to people that transitioning to climate neutrality does not bring loss, but gain. The costs of not acting now are going to be far greater than any action we take in the present day.

“Plus, many jobs can be created within the green economy and transition efforts. What is missing is political will and courage.”

The pressure of their role model status does not seem to weigh too heavily on these young activists – they remain hopeful for the future.

Iona is encouraged by the impact that School Strikes and the work of Greta Thunberg has had on the public.

“The one positive way I found of dealing with this eco-anxiety was to get involved in activism. By helping to raise awareness, I feel like I’m not just a helpless bystander,” she states.

Saoirse describes her hope as a pendulum; “Some days it’s really strong and I really feel like we will make a change, and other days I don’t. So hope depends on the day.”

Find out more about Fridays for Future Ireland.