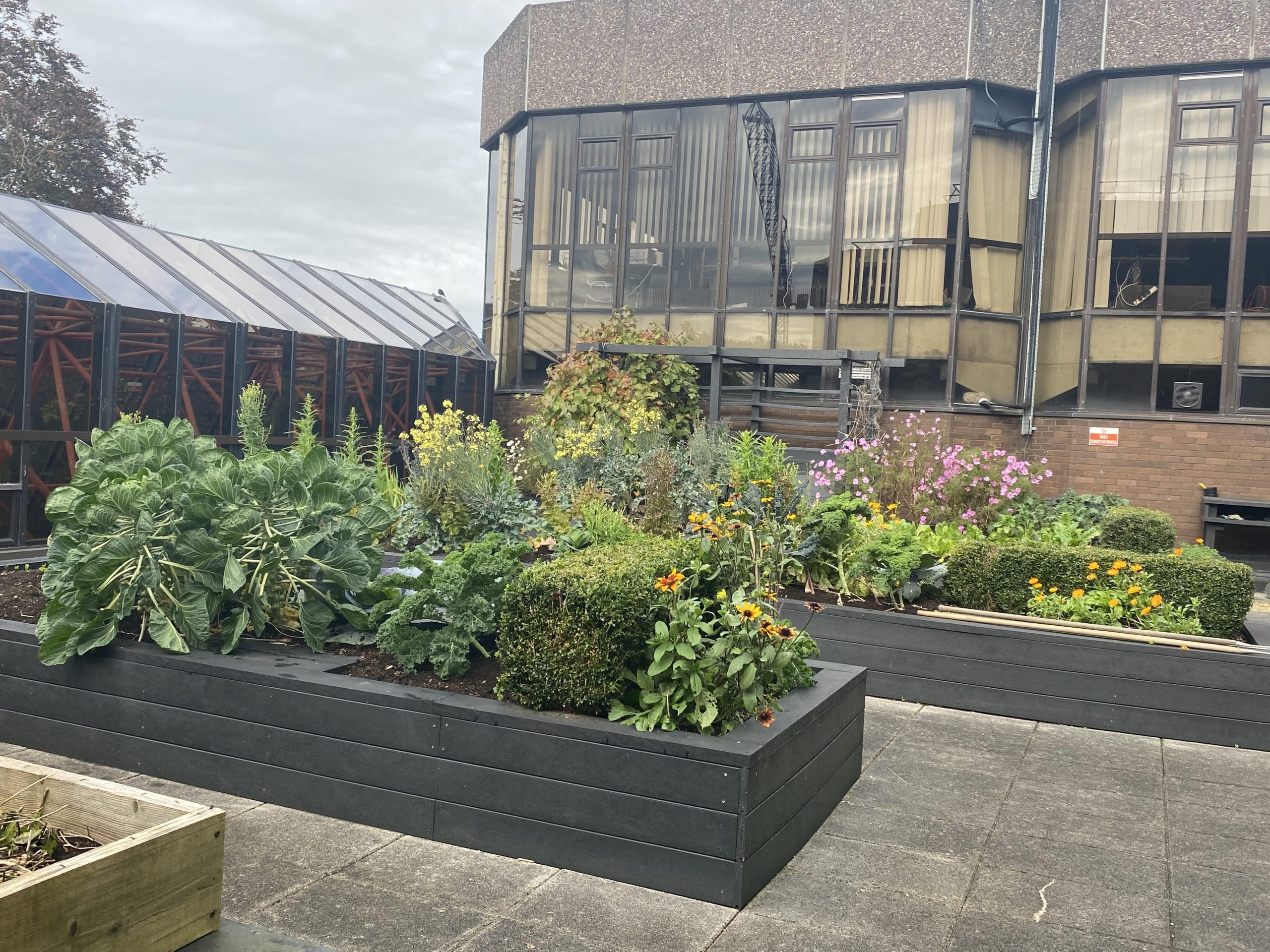 Located in the main building of the University of Limerick, the urban space champions organic food production while creating a valuable sense of community

Within the bustling main building of the University of Limerick, countless people have found solace and purpose in a tranquil roof garden overlooking the campus.

The idea for the garden was first sown in 2012 when it was decided to revive an existing roof garden that had fallen into disrepair.

The environmental committee decided to renew the space as an urban agricultural project project with sustainable, local food production at its core.

Professor Colin Fitzpatrick, the Head of the Department and an Associate Professor in Electronic and Computer Engineering at UL was a member of the committee of the restoration project.

“It was quite in fashion for a while in environmentalism to think about food miles, how far has your food travelled and how much food could actually be produced within a city,” said Colin.

“This was a big conversation happening at the time and we said we would make an example by putting this idea into practice.”

After asking permission and getting the go-ahead to restore the space, an obstacle arose when the ceiling of a lecture theatre below the garden began to leak.

Despite the time setback due to the refurbishment, it provided an opportunity to redesign the garden from scratch specifically catering to vegetable production.

“It just so turned out that we got this beautiful, newly built garden for ourselves instead of just colonising a derelict space,” said Colin.

To organise the garden, the committee had several workshops to figure out how they should manage the space and figure out the best methods.

While an allotment-based system was considered, a system of a community space led by an expert gardener was decided to be the best model.

Horticulturalist and organic farmer Jim Cronin provided the expertise the project needed as the newly built garden was not without its challenges.

Jim said, “From a horticultural point of view, it’s one of the most difficult sites that you could grow flowers and vegetables in. A whole section is shaded, it is windy as the walls create a whirlwind and it is also subject to ambient heat from the buildings.”

The ethos of the garden is adhering to the principles of organic food production, with no herbicides used on concrete paths and recycling all green waste in the garden’s compost heap.

“We wanted the garden to be beautiful looking, benefit insects and have food for people to take home. It’s a mixture of everything, but it is also a social space. There wouldn’t be pressure on anyone, and you could partake even if you are a total beginner. The thing is to turn up and experience what it is like to have your hands in the soil,” said Jim.

On Thursdays, volunteers come to the garden for an hour to work on a range of tasks and meet like-minded people.

Due to the transient nature of the university, the garden has welcomed countless people over the years from an extensive range of countries.

Volunteers from China, Columbia and Iran have all contributed their knowledge, with many international students using the garden to get back in touch with their homelands while living in Limerick city.

Colin said, “The reason people come is that they are learning, they are interested in it and a lot of people have their gardens and come for advice and questions. It’s very social.”

The garden also provides a valuable sense of community, with about fifteen people volunteering at every meeting taking the opportunity to chat and share ideas.

This year has been a bountiful harvest with kale, potatoes, salad, pumpkins and squashes distributed amongst the volunteers.

While the fresh produce is a bonus for volunteers, the real draw to the garden is the unique sense of community it fosters within the university.

“We have a lot of formal education on campus, with lectures, modules, labs exams and projects. The garden is something that was designed to provide a place of learning, but not within the formal structure,” said Colin.

“By having a place like this where people come, the conversations you pick up are so interesting. You could have a chemistry professor talking with an Erasmus student and exchanging knowledge. You pick up a breadth of expertise in a really casual way.”

As another season draws to a close, the volunteers are about to plant the beds with tulips that will provide an explosion of colour next spring.

A testament to the success of the roof garden lies within the camaraderie generated within the small space during the weekly volunteering sessions.

Jim said, “The biggest benefit of the garden is that for many people university can be a very isolating experience. What I have found here over the years is that people come here, network and they meet a like-minded person that leads to a friendship. Gardening is a great uniter.”