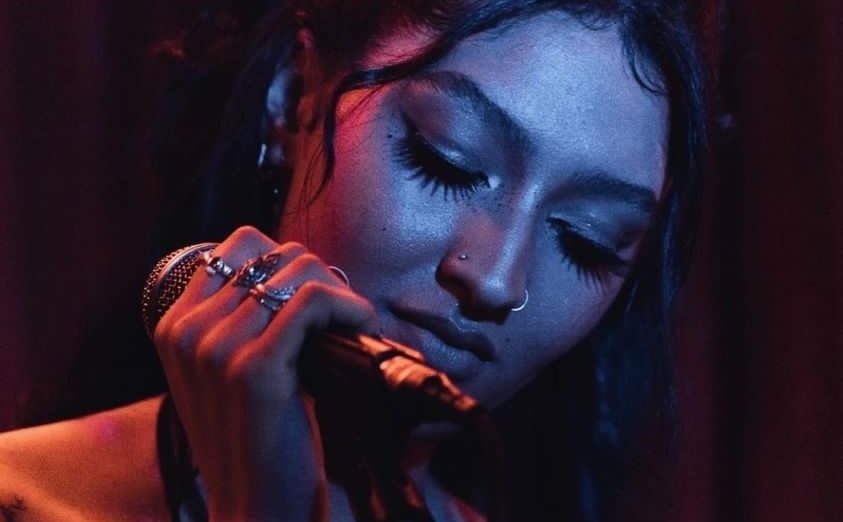 Limerick has become known as a county consistently brimming with emerging talent, and Joyce Zacks is no exception.

A recent UL graduate in BA Performing Arts, Joyce is fast becoming a staple of Limerick’s music scene. From her first gig, performing as an entrant of the Limerick Rose competition, to making the decision to pursue music full time, Joyce is now booked and busy.

While some people grow up wanting to become a musician, Joyce made her decision relatively recently.

“I always wanted to do music, but when I decided, ‘Oh my god, this is gonna be an actual job’, that was probably in 2019. I was one year into my degree where I was like, ‘Do you know what…’

The arts sector took a significant hit during the pandemic, and no one felt that more than up and coming artists. Joyce used the time to create on social media, but she doesn’t feel that Ireland is as responsive to content creation as it could be.

“In Ireland, people are not really into social media and stuff like that. I would see a lot more people at my gigs than I would engagement online. But at the same time, social media has been great in that I’ve ended up talking to some really great Irish artists through those platforms.”

Joyce talks to the Limerick Voice about moving from the genre of rap to indie.

“It took me two years to stop listening to what people were saying, and say, ‘You know what, I’m gonna do what I want.”

When asked if life as full time musician is what everyone imagines, Joyce responds, “It is and it isn’t.”

“At this moment in time, I’m focusing on the social aspect of that world and meeting everyone. It’s nice to be your own boss.”

Working with producers Matt Tyrkiel and Kriss Burda, Joyce feels that Limerick is good place for budding musicians such as herself to kickstart their careers.

“I know some people who would say Limerick isn’t that, but it genuinely is. There’s a lot of helpful musicians here and Limerick is very, very supportive of it’s artists. I’ve never come across another county or country that supports their artists like Limerick does.”

Joyce’s dream collaborations, interestingly, are all with fellow Irish artists.

“Inhaler,” she declares. “I actually say this every interview. At this stage, they just need to do it so I can shut up! Maybe it’s a biased opinion, but I genuinely think they have the best sound I’ve ever heard in my life. I listen to their whole entire discography almost every single day. Or Fontaines DC – they are phenomenal. They sound like how I think I look, if that makes sense?”

Most artists would say they’ve had an ‘I made it’ moment, and Joyce can predict what she think hers will be.

“I’ve thought about this one. It will be when I see a crowd singing my lyrics back at me – no matter what size the crowd is.”

“I remember when I played Dolan’s in March, there was two people in the audience singing my song ‘Dream of Manchester’ back to me because they’d gone to my previous two gigs. I suppose that was a little ‘I made it’ moment. I was like, ‘Oh my god, this is so cool.”

When asked about dream venues, Joyce has a few in mind.

“To be honest, probably The Big Top in the Milk Market. Everyone is always like, ‘Really?’, but it’s the small ones!”

“Also, the 3Arena obviously, and then probably one of the O2’s in England. Or just a collab with Inhaler!”

TikTok has become a platform where many artists of all disciplines have turned to to create content. Joyce, however, doesn’t understand the type.

“My TikTok gets more interaction than my Instagram. It’s weird, but maybe I’m just old. It’s so strange to me. Even though I post almost every single day, I’m still like, “This is so odd.”

“I would be more of an Instagram fan. I like taking pictures – if I wasn’t a singer, I would probably be a photographer. I just love how different pictures tell different stories, and they can also be interpretive. I get to be creative on Instagram and do different looks. And I know I can do that on TikTok too, but it’s not the same.”

Joyce has been praised by one of Limerick’s most successful musicians, Denise Chaila.

“She came to my show the other day. And it just so happened to be one of those shows where everything goes wrong. The sound blew out, and my bass player wasn’t able to play so I had to get another bassist to learn the set list in literally three hours.”

“At the end of it – you know when you just want to cry because something goes so wrong? – Denise came up to me and asked why I was so upset. I was like, ‘Because everything went wrong’, and she said ‘Fair play to you, ’cause I would never have known’.

“She so supportive, and to be honest she has kept me going an awful lot of times because she’s so lovely to me. She’s too good, as a musician and as a person.

“It’s such a Limerick thing to say, but she’s a legend!”