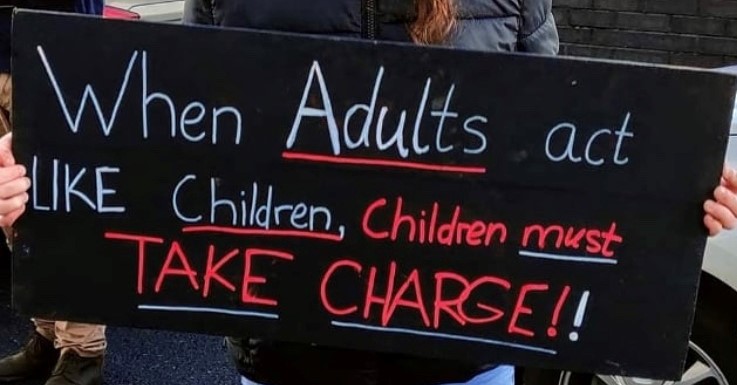 IF you’ve been in Limerick recently you may have noticed a small group of young people not so casually trying to change the world. The Fridays For Future Limerick movement has been holding strikes here in the city every Friday for the past six months, slowly but persistently trying to hammer home the urgency of our climate crisis, and at the movement’s helm is 14 year old Saoirse Exton.

Fridays For Future (FFF) is an international youth lead movement of school students and others who protest inaction on global warming and climate change by taking time off school every Friday to strike. The movement was started in August 2018 when a 15 year old Greta Thunberg sat outside the Swedish Parliament every school day for three weeks to protest the same.

Saoirse started up the Limerick chapter of the movement shortly after FFF Ireland was set up. 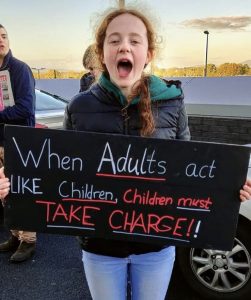 “I was always a little bit scared of climate change and I suppressed it a lot. When I saw Greta Thunberg and the Australian strikers I realised – these are people my age who are actually doing something.” she told the Limerck Voice in a precious free moment she gets between doing her homework, going to cello lessons and trying to force acknowledgement of our climate emergency.

Two weeks ago Limerick Metropolitan Council did just that when they passed a motion to declare a climate and biodiversity emergency in the city, a motion which was co- written by Saoirse with Councillor Elisa O’Donovan.

“She has been very supportive, even before she got elected.” Saoirse said of the councillor.

“She thought that it would be a good idea to present to the Metropolitan Council our motion, which is a co-motion that FFF members wrote, for the declaration of a climate and bio- diversity emergency in both the Limerick city and Limerick county council”

For Saoirse however, simply declaring the emergency isn’t enough, and it’s a frustrating situation.

“We’ve been striking here in Limerick for 6 months now and only now, only two weeks ago a climate emergency was announced and since then nothing has been done.”

This exasperation she feels was reflected in Greta Thunberg’s emotive speech to the UN last week.

“It’s incredible that she could actually put that feeling in words. I wouldn’t be able to do that. She’s very inspirational, I know that word is overused, but what she said is true.”

It’s becoming increasingly obvious that the burden and responsibility of global warming is for some reason falling on the heads of our young people and teenagers. Being a very critical thinker, Saoirse shared her thoughts on why this might be.

“All the adults who are actually causing the problems will say ‘Oh it’s all those young people’. That’s an attitude that I’ve heard a lot. I’m not that kind of young person, and that ignores people like me. So I think the blame has kind of fallen onto us because of that, because adults are too scared to say it’s their fault.”

Perhaps it is the weight of having to be so selfless which makes it seem ridiculous to her when people like Ryan Tubridy make comments about Greta Thunberg’s UN speech saying she needs to go home and watch a movie.

“I find it bad because Ryan Tubridy is a mainstream figure and so he obviously has some sway on opinion.”

“It’s also providing ammunition for people to start attacking me and others in Ireland. For anyone in any kind of public position of power – it’s irresponsible.”

However, Saoirse assures that there will be more strikes to come in the near future and there’s lots going on in the background.

Her message for the people of Limerick? “Just think.”