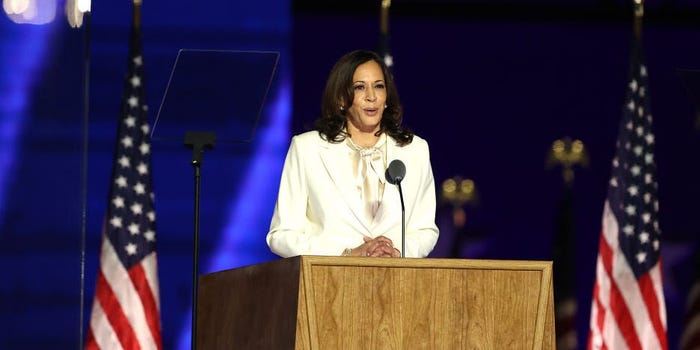 Limerick City Councillor Elisa O’Donovan has hailed the ascension of Kamala Harris to the role of Vice-President in the United States, saying that it is “hugely significant” in terms of female political representation.

Kamala Harris is the first female Vice-President of the United States and is the daughter of an Indian mother and a Jamaican father.

O’Donovan said Harris being designated Vice-President-elect in the highest political office in the world has “really given a lot of people a boost as people like seeing more inclusive representation.”

The Independent Councillor, who represents Limerick City West, said: “It’s important for a functioning democracy that we have a good representation of all people – men, women, disabilities, people of colour – in our governing processes.”

Echoing the sentiments of the 20×20 movement, which advocates for greater female representation in Irish sport, O’Donovan said “if you can’t see it, you can’t be it.”

Discussing her own experiences as a female politician in Ireland, O’Donovan said, “the structures we have at the moment are inherently masculine,” and that it can be “very difficult for women to progress in political leadership in this country.”

Citing the stats, the 4 TD’s elected to represent Limerick in February’s general election were male, O’Donovan said the all-male cohort does Limerick “a great disservice at a national level.”

Out of the 40 council members in Limerick, 9 are women, and O’Donovan says these councillors are a member of a women’s caucus, where O’Donovan says they “come together to and work to increase female representation in city and county.”

“It’s really important that everyone works together – From what I’ve seen and what I know, Limerick wants to see more women at the decision table.”

“We know that in countries with inclusive governments where you have better representation of women, they’ve been linked with an increase in the quality of life in people, and there’s much more fairness in the decision-making process.”

In Harris’ remarks on Saturday night, she said, “While I may be the first woman in this office, I will not be the last,” adding “Because every little girl watching tonight sees that this is a country of possibilities.”

O’Donovan has some words of advice for those who were inspired by the speech.

“I would encourage anyone to get involved in politics – it can be daunting to do, and it certainly is something you would need confidence to do.”

“Chat to a local councillor – such as myself – or avail of any training. Surround yourself with people who believe in you and have that core team around you.”

Discussing the role local media plays in Irish politics, O’Donovan stated that local media outlets have shown themselves to be quite “sexist.”

However, that doesn’t put O’Donovan off.

“I think it’s a really positive thing politicians don’t have to go through traditional media outlets anymore,” she added.

“I’m very hopeful that the election of Kamala Harris has really given people a boost and I think Limerick wants to see more women at the decision table and want to see more women leaders in the city and county.”