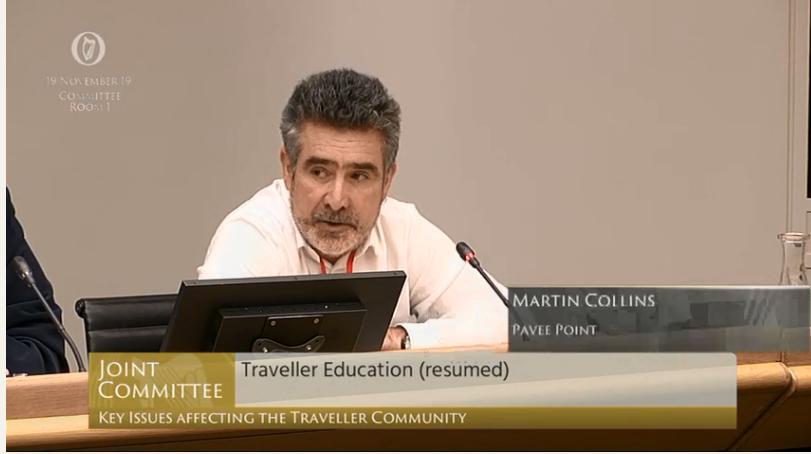 The media is a vital part of any society. Without such channels, we would not have access to the news which shapes our world.

However, the media comes with its own set of challenges as it sets the tone for many social issues in society. Its main one being how minority groups are portrayed.

Speaking at a Media Matters seminar set up by the University of Limerick last Tuesday, Martin Collins, Traveller rights activist and co-director of Pavee Point Traveller and Roma Centre, outlined the harsh realities for the minority groups of this country within every aspect of life.

He began sharing the first recorded reference to the travelling community in the fourth century. “Tynkers” as opposed to the modern spelling, “tinkers”.

To provide added context to the word’s history, Martin Beanz Warde, a member of the travelling community, explained that many years ago the word “tinker” was not always a slur.

In fact, it was used to describe a tinsmith who crafted ware from metal. Throughout the years, due to the more frequent use of the term in a derogatory fashion, the word has become one which has negative connotations.

‘History gets written by the elite’

More recently, since the 12th century, minority communities have been referred to more often in the media yet nevertheless, sporadically at best.

Martin Collins explained the reason for this being that “history gets written by the elite, privileged and those with power.”

According to Mr. Collins, the infrequent references to Traveller and ethnic groups in history, and in turn media, “contests the existence of our identity”.

Though many of the settled community may not realise it, the media and the constant stereotyping play a vital role in the hindrance of Traveller education.

As far as statistics go, Mr. Collins made clear that only “13% of Travellers complete secondary education”, as opposed to 90% of the settled community.

Upon interviewing Martin Mongan, a traveller studying at the University of Limerick, wrote “I started [an all boys] secondary school in 2011 with ten other Traveller students [and was] the only Traveller in my year to do TY”.

He also stated that only “two Travellers graduated in 2016”, the year of his graduation, himself included. An article in the Irish Times published this month reported that Traveller children do not feel “safe, wanted or included” in school, with special emphasis on secondary level education.

Phraseology throughout the media when discussing these minority groups is critical to their self-esteem.

‘My life choices doesn’t define me’

Mr. Collins touched on adjectives used to misrepresent Travellers, such as “misfits, deviants, people who need to be civilised” which are quoted in media daily and rarely challenged. In his words, this is “reckless, dangerous language”.

After publishing a successful article online,Martin Mongan, found himself dubbed as a “University Traveller”, which he found “unnerving”. “I am a Traveller who’s in university”, he wrote, “my life choices doesn’t define me”.

Centuries of denial in the media towards Traveller culture, language and civilisation has led to years of oppression within their community where a significant number are ashamed and simply do not want to identify as Travellers any longer.

In a 2016 interview with Ryan Tubridy, Traveller activist John Connors stated that he believes Travellers are “ashamed”. When asked why, he admitted, “because we are being attacked left, right and centre”. On the same segment, Traveller activist Sindy Joyce reiterated this saying that Travellers “internalise that negative attitude” and in turn eventually believe that they are “not good enough”.

While many of the settled community may think they frequently see, or hear of Travellers in the media, in fact, it is not often that Travellers are seen discussing anything other than issues relating directly to the travelling community. Martin Collins used the term “pigeon-holed” to describe this concept.

“We have views. We can make comments around the economy, around whether Ireland should be a member of the European Union or not, around religion, around politics” he stated.

On this note, Mr. Collins advocated that Travellers need to stop being “problematised” in the media. Oftentimes, activists such as himself are not actually wanted on debates relating to Traveller issues, but rather Travellers who have, in his words, “never done public speaking” or indeed have “no media training up against a politician who are very polished speakers”. Inevitably encouraging the negative stereotypes to manifest.

What can journalists do as media front-people to curb the stereotypes? Mr. Collins explained that overall there are “many challenges remaining to get balanced, accurate [and] sensitive reporting done on Travellers”.

Furthermore, according to Mr. Collins, sensitivity training in relation to minority groups should be availed of by all in the media sector.