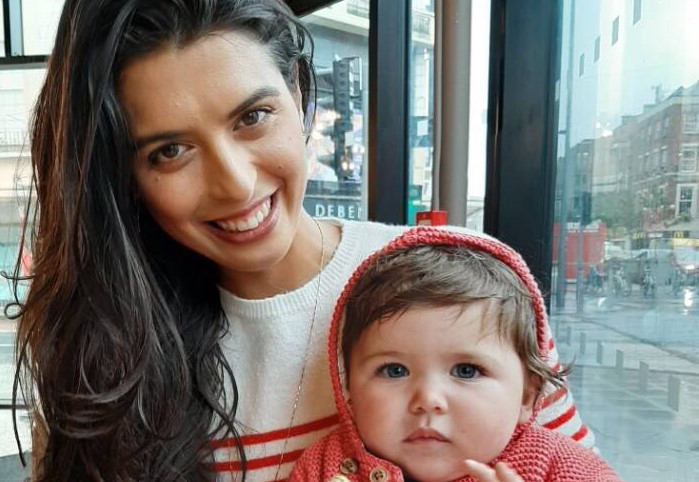 DANILLY Carvahlo, a native of Brazil and resident of Limerick for over five years, has been raising her ten-month-old baby as a vegan since she was born.

Danilly became a vegetarian when she first moved to Limerick as she felt it was the perfect opportunity after leaving Brazil and its strong meat culture behind.

She later decided to become vegan giving up all animal by-products such as milk and eggs, as well as meat and fish.

Danilly explains her number one reason to become vegan “is the compassion towards the animals, the second one is the environment, and the last one, which is very important as well, is the nutrition”.

After continuing her vegan lifestyle throughout her pregnancy, she decided it “wouldn’t feel right” not to raise her first-born, Eva, as a vegan as well.

Speaking about other people’s reactions to her decision, Danilly admits that her GP was apprehensive at first about going through a vegan pregnancy but says he’s open-minded and is happy with her well-balanced diet.

When she visited the maternity section the nurses and doctors assumed her iron levels were low before even seeing the results.

“All my bloods and everything were fine” she explains.

Danilly had a very healthy pregnancy and healthy baby despite most people saying, “you’re not going to have enough nutrients and the baby will not have enough folic acid”, among other things.

Nowadays a typical vegan breakfast for baby Eva includes mashed bananas with some nut butter, for snacks she often has some avocado, tomato or hummus, while her dinner is usually some grains, lentils, rice and tomato sauce.

“How is it not okay to feed her vegetables and grains and seeds and nuts? What’s the crime in that?” Danilly asks.

“I can get everything from those things. It’s funny because people don’t really realise the animals get those things from plants. And I’m getting the plants. I’m not getting the animal. I’m just skipping one step.”

“I always cook from scratch, I love cooking, so I love cooking for her,” Danilly adds, explaining she doesn’t give Eva processed food.

When faced with criticisms like “it’s unethical to raise your baby vegan”, “it’s unfair” and “the baby doesn’t get to choose”, Danilly admits it’s hard not to get angry.

“Everyone should look at themselves first before they say anything to me or anyone else. If someone is saying well that’s unethical, it’s wrong, you’re forcing your views – we are all forcing our views on our kids. Whether it’s food or religion, if it’s anything you force it somehow.”

She continues to say that kids “don’t know that pretty little cow, pig or fish are the animals that are on their plate”.

Danilly wants to keep that innocence in her baby Eva for as long as she can.

“When she is wise enough, she can make her own decision. If she wants to eat non-vegan products, she’s free to do it.”

She urges people to look at their habits first and ask themselves “am I okay to judge someone else? Should I look at myself first before I judge that mother who only wants the best”.

As well as having her regular GP, Danilly also has a naturopath, which is a holistic doctor who works with herbs and herbal medicines and looks at the “natural ways of healing yourself”.

The vegan mother of one doesn’t like the conventional medicines and believes in the power of herbs.

She is breastfeeding now and when her daughter Eva comes off the breast, she wants to make sure her immune system is well prepared.

Looking back to 2014, when she first came to Ireland, Danilly reflects on how difficult it was to find soy milk and vegan alternatives.

She emphasises that now she can “find vegan cheeses, vegan mayo even, all the alternatives” in most shops.

However, when it comes to restaurants Danilly finds vegans are limited finding “only one or two options”.

In the end, Danilly states that vegans are “only here to inform everyone of our diets and our views and that’s what we want. We just want a better place to live. That’s all.”

“I’m not being blindfolded in my decision. I think people should really do their research and check what’s the bad thing about being a vegan and raising your baby vegan,” she adds.