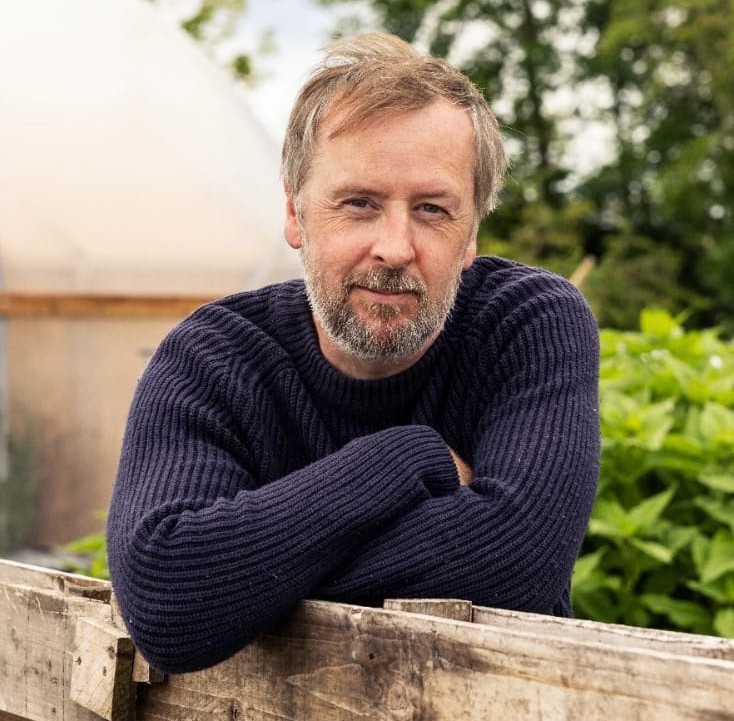 In our increasingly globalised world, local food producers are developing new and dynamic solutions to challenge the import dominated market.

One Ballyneety based farmer has overturned the idea of large scale factory farming to create his award winning biologically diverse market garden.

Kevin Wallace noticed the land use values were becoming increasingly unsustainable after returning to his hometown of  Broadford, County Clare after being abroad for a few years.

“When I was growing up we had a hurling team at every level and when I came back from Asia in 2007 the teams were amalgamating together. Everyone was leaving the countryside as there was no way of making a living,” said Kevin.

“A big farm when I was growing up was 100 acres. You probably won’t even make a living on that nowadays. That’s the problem.”

Taking a new approach to land use, Kevin utilised the values he discovered while working throughout Asia to establish New Leaf Urban Farmers.

Having a background in education and sociology, Kevin never intended to carve a career in market gardening.

Kevin has struck an affinity with the chefs and buyers, influenced by his parent’s personal approach to running their engineering company that retained their loyal customer base.

“I saw how they ran a business based on interpersonal relationships and being good at what they did, giving it the extra touch without forcing that, it was just a natural thing for them. That was ingrained in me as well with the micro-farm. Developing relationships with customers is really, really important to me.”

A key aspect of New Leaf’s practice is the Korean Natural Farming approach that takes indigenous microorganisms from the locality and cultures them before  being reintroduced to the soil.

This helps prevent disease, while also omitting the need for synthetic fertilisers and pesticides.

Kevin learned of this unique farming while travelling between Thailand, Vietnam and South Korea teaching English and was struck by the difference attitudes towards land use compared to Ireland.

While South Korea is a similar size to Ireland and seventy percent of land is mountainous, it supports a population of more than 50 million without depending heavily on food imports.

“Every single scrap piece of land between buildings was used to grow chilis or scallions.  I lived in Chungju known as the apple province and they had apples growing down the middle of the road.  I was fascinated by that,” said Kevin. “I thought, how much land do you actually need to farm?”

With an average Korean farm a mere 2.4 acres, Kevin was drawn to the philosophy of less-is-more lean management and the protectionist policy of placing taxes on imported food.

Kevin travels to local woodland areas in Curraghchase and Cratloe to capture local microbes that he cultures and multiplies before reintroducing to the farm’s soil.

By flooding the soil with these native microbes, it eliminates disease and imbalances that causes farmers to grow dependant on fertilisers, fungicides, herbicides and pesticides.

“If you are raising animals or growing on vegetables with something that has no chemical inputs, there’s a natural, higher and more nutritionally dense food, it tastes different because it’s natural and it is growing at its own pace,” said Kevin.

“But to use chemical agriculture, you are forcing the food to grow quicker so it’s less dense food nutritionally. If you look at the World Health Organisation’s meta-analysis of vegetables since the 1950s since the beginning of the advent of chemical agriculture, the nutritional quality has gone down between 40- 60%. You need to eat more because you are getting less nutrition. What are we doing wrong?”

Since beginning this method in 2019, the clay-heavy soil at New Leaf is no longer cracks in the hot summer heat, nor does it flood during heavy rain due to a newfound ability to absorb and lock in rainwater.

“It’s amazing, I’ve birds walking around my feet because the soil is so rich. If I disturb the soil in anyway, they are there picking up bugs or worms. Ladybirds, hoverflies, which weren’t really there when I started the farm are there now and they have been there for quite a while. For me it’s the Korean natural farming that means you are not killing or hurting the soil.”

Running a highly productive farm on such a small space is a model that offers to prevent the current disintegration of rural communities and restore depleting biodiversity.

While many farmers are looking to embrace new practices and there is a huge demand for organic produce, Kevin cites the supports to implement  change as lacking.

“While there are horticultural grants, it’s just so hard to get them. It’s so much paperwork, you just give up. The grant system needs to be streamlined, and the government needs to understand that we have to become more self-sufficient.”

One of the greatest challenges facing Irish fruit and vegetable suppliers is competing with the extremely tight margins set by imports from countries such as Italy and Spain.

Another problem associated with our current food import dependency is food often arrives days old, leading to a high-waste value alongside the carbon footprint of transportation.

“That policy has been there and has led to super farms, this idea of mass production with factory farming, and that has had all sorts of implications throughout rural Ireland and rural life throughout Europe. It also raises huge ecological questions.”

“I’m a huge supporter of the EU and believe it’s a great thing, however this needs to be addressed.”

While farmers are encouraged to challenge their existing practices to become more sustainable, Korean natural farming provides both a profitable and scalable solution.

“It’s very low input, you make it all yourself, it’s extremely easy to make it you are using all your materials locally,” said Kevin. “There is no real middleman as you are cutting out the inputs and that’s your profit level. It means you don’t have to have three hundred acres.”

Despite never intending to become a farmer and navigating the unsociable hours associated with harvesting season, Kevin maintains the career is immensely rewarding.

“The immediacy of now goes, you don’t think in those terms anymore. In modern society you have a tendency that everything is now, you had to have it done yesterday idea. When people volunteer on the farm, they have to get over that hurdle and once they do they find it quite addictive,” said Kevin.

“There’s a place of peace and quiet, time seems to stand still and you get to appreciate the moment but in a different way. To get back to nature and get your hand in the soil is a very important thing.”