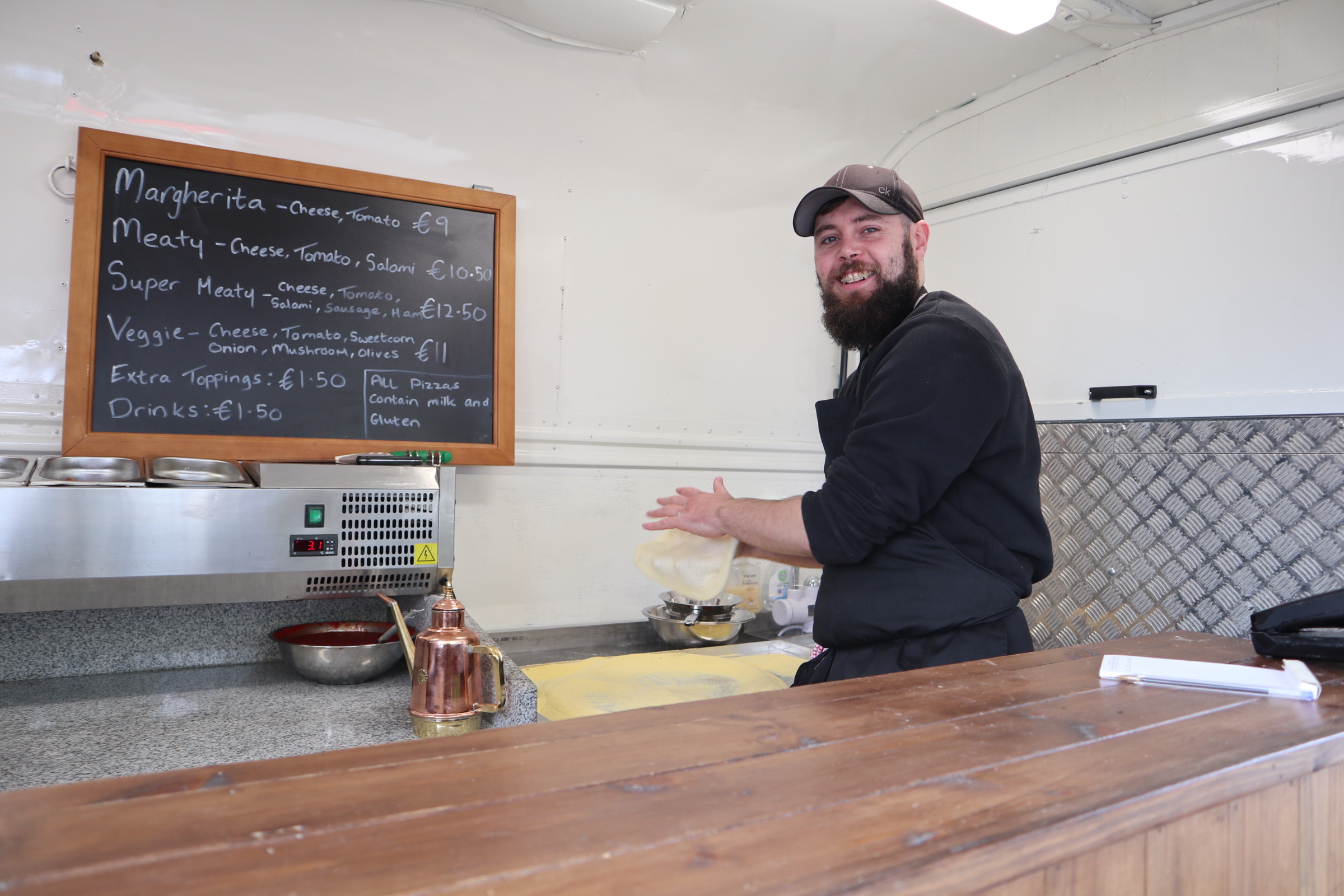 ‘Dough Mamma’ is the new, and delicious, addiction to both Castletroy and Wickham Way’s weekly markets, serving pizza out of a re-modelled horse box trailer with a state-of-the-art wood fire pizza oven.

Eoin Foran, owner of ‘Dough Mamma’, purchased the trailer two years before deciding what business venture he would use it for.

He even toyed with the idea of setting up his own coffee trailer for awhile before turning his entrepreneurship to pizza making.

Eoin studied hospitality and business at the Hotel School of Hague in The Netherlands for four years.

During his studies he was working in a restaurant in Amsterdam, so when it came to learning the art of making great pizza he felt compelled to reach out to a former co-worker with skill and expertise in culinary.

“I went back out to The Netherlands to train one on one with him. He trained in Florence, Italy so it’s the proper Neapolitan pizza. If there was anywhere I was going to learn pizza from, it’s him. Then I came back, did up the trailer and started here just seven weeks ago.”

What makes these pizzas so special?

People are flocking from all over to get a taste of ‘Dough Mamma’s’ signature pizza but Eoin refuses to give up his “special secret ingredient”.

He was willing to reveal some of the secrets that help make his pizzas so popular and appetizing.

“Really good ingredients- don’t cheap out on ingredients. I make my own dough from scratch and let it rise for three days.”

Diane explains how it’s their favourite pizza around, and they won’t eat pizza anywhere else since trying it.

The pizza menu has an option for everyone, including margherita, the ‘Meaty’ and ‘Super Meaty’ pizzas and vegetarian, with the crowd favourite being the ‘Super Meaty Pizza’. Eoin hopes to introduce a gluten free option in the future.

He also notes that “his pizza is too good to serve with garlic dip” but it may be something he will look at adding to the menu in time.

A special staff member worth mentioning is Eoin’s pet dog, Mille. She is always at the market with Eoin while he works and has been helpful in attracting customers with her sweet charm.

Eoin has a great sense of humour so when it came to the name of his new pizza trailer ‘Dough Mamma’ derived from the classic ‘Yo, Mamma’ joke.

If you have a love of pizza, good jokes, dogs and supporting local, be sure to get down to Castletroy Market on Friday’s between 10am-2pm or Wickam Way on either Friday between 4pm – 10pm or Saturdays between 9am-2pm to try out the new best pizza in town.

Support ‘Dough Mamma’ on social media by keeping up to date with them on Facebook or Instagram.