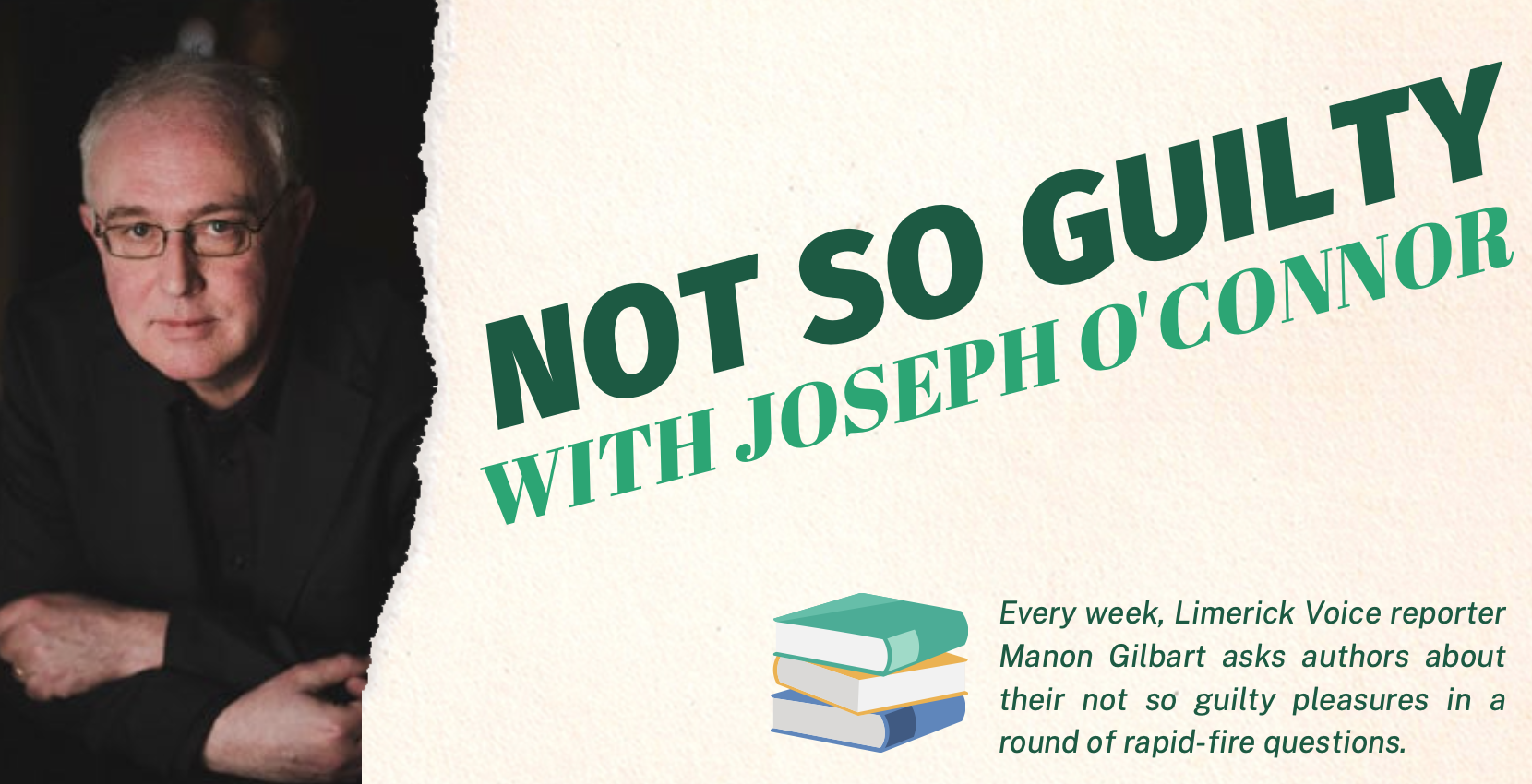 Irish novelist Joseph O’Connor is in high spirits after receiving quite the news from Spain shortly before the interview.

As he is sitting in his armchair neatly placed in front of a UL Creative Writing poster, Limerick Voice reporter Manon Gilbart asks him a round of rapid-fire questions.

How would you describe your writing in 3 words?

Which of your characters do you relate to the most?

I love all my characters, I relate to all of them, and I never forget them. Once I’ve written them, even after the book is finished, I carry them around with me. The character I relate to the most is called Molly Allgood, she’s the heroine of my novel Ghostlight – and she’s nothing like me.

Is there something you would never write about?

Well, I would never consciously write about myself. I’m not interested in myself, I have no desire to write a memoir or a family story. I mean, I’ve written little bits and pieces about bands that I liked growing up or writers that I liked, but I’m not really a first-person writer.

A book you have read more than once?

The first book that I read when I was 17, that made me want to be a writer, was The Catcher in the Rye by the great J.D. Salinger. I can specifically remember it was the year I did the Leaving Cert, I remember turning the last page of that book and thinking ‘that’s what I would like to do with my life’, because I was so amused and so touched and moved by the book. Every 3 or 4 years since then, I’ve read The Catcher in the Rye again, and it’s like going on pilgrimage.

The second one is James Joyce’s Ulysses, which I read for the fifth time last summer. Every time I read Ulysses, I love it more. I kind of have a theory that you shouldn’t be allowed to read it until you’re about 30. I think it’s because the young character in it is so hard to like, as they say in Limerick sometimes, ‘he’s a bit of a dry shite.’

A classic you feel guilty for not reading?

I’d like to read the Bible from cover to cover – something I’ve always wanted to do. I’m very interested in it as a piece of storytelling. There are wonderful moments for the storyteller. I’m always saying to my students that the ideal number of characters in a story is three. Two people isn’t a story. Adam and Eve live in happiness for a few thousand years, that’s no story. Then along comes the snake, suddenly it’s three.

You invite 3 people to go on a wild night out. Who are you sharing a pint with?

Well, it’s got to be Adam, Eve, and the Snake. Let’s get the real story here. You know, in a pub in Limerick. ‘Have you met my friends? Here’s Adam, Eve and there’s my sneaky acquaintance’. Maybe in the bar of the Castletroy Park Hotel, I’m sure they would do us a nice cocktail there for the three of us.

An album that inspires you to write?

While I’m writing, I tend to listen to non-verbal, music without lyrics. You know, if it has lyrics, I kind of go into it a bit. I listen to classical music or jazz or Gregorian chant or instrumental or Chopin or John Field. And I suppose, if there’s one album that makes me want to write, it’s probably Bob Dylan’s Blood on The Tracks. To me, that’s Bob Dylan’s great novel.

Isn’t there something so awful about a hero because like, most of us are not heroic, and we know we should be. I like not so much a villain, but I like to read about characters with flaws. I think we go to fiction to see ourselves and have an experience of empathy. So, I love in the novel when people are weak, or when they make mistakes. Then, if they fix them, it’s less of a drag for me as a reader, I kind of am on their side, I want them to get better.

What can you tell me about your next book?

I’m not going to tell you. I have no superstition, apart from that one. I’ve been working on this novel for four years and I know that if I told you about it, we would end our call and in about 5 minutes, it would just crumble to dust. It’s sat in Rome during World War II. It was great during lockdown, to have Rome to go to every day, in my head for an hour or two.

Before ending the call, Joseph adds “Well, I’m off to have a drink now with the snake and see what their perspective on things is. It’s gonna be interesting.”

The award-winning author is currently writing a six-part documentary series titled “The Liffey”, which will be broadcast on RTE 1 starting from January 13.