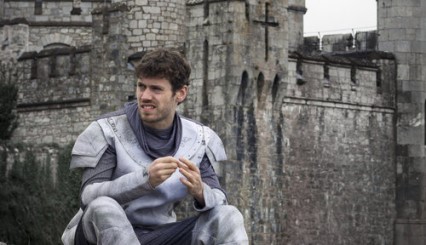 I didn’t know what to expect from Luke Murphy’s solo performance of ‘The Milkyboy Kid.’   I hadn’t attended a performance by the award-winning choreographer before but as soon as I arrived at St John’s Church in Limerick, I observed that the atmosphere was quite relaxed and the crowd rather intimate. The show was in conjunction with Dance Limerick, a local organisation which promotes, supports and celebrates dance creation, presentation and participation. Attendees and fellow dancers in the community arrived at the performance space early and settled in for an hour of dance and spoken word performance.

The set was quite stripped back providing a simple space for the performance with no distractions. Murphy could be seen stretching before the performance got underway and then applied the right lighting before beginning his performance. The dancer then brought the audience on a journey as he narrated throughout the performance divulging how he told his mother he wanted to be a dancer despite not wanting anyone to know this fact for years. He portrayed different characters and emotions and incorporated props to do so. Few props were used for the performance, but Murphy made use of a rail of clothes to portray these characters and stories.

What I enjoyed about ‘The Milkyboy Kid’ was that Murphy kept moving onto something else to keep the audience engaged. It was also a very personal performance and for someone like me who didn’t know much about the dancer previously, it was very interesting. Murphy is a contemporary dancer and this was obviously reflected in the piece making use of the space available and paring back the performance to be about the dance and storytelling alone. There was nothing fixed or methodical about the performance, but he moved seamlessly from one piece to the next. The pared back performance highlights how dance and culture is about just that and needs no glamour or luxury to make it a sparkle any more than it already does. And in essence this is the premise behind ‘The Milkyboy Kid’ finding out what you can do on your own without finances and fancy props.

I loved how Murphy incorporated video into his routine which depicted his journey as a dancer recounting his experiences from childhood to now. The dancer mimicked the movements in the clips from previous performances which was quite comical to watch. The audience could observe how Murphy’s talent and ability has progressed and how he has grown as a dancer, changing tack and settling on contemporary dance as his niche. There is a nice contrast in ‘The Milkyboy Kid’ between the quiet spoken element of the piece and the bursts of dance in between. The piece is quite reflective and almost spiritual in nature with the audience growing with Murphy as the performance goes on. The audience gets a brief glimpse into the trials and tribulations of a contemporary dancer today and this manifests itself through the ups and downs experienced by Murphy whilst finding his feet in the world of contemporary dance and choreography.