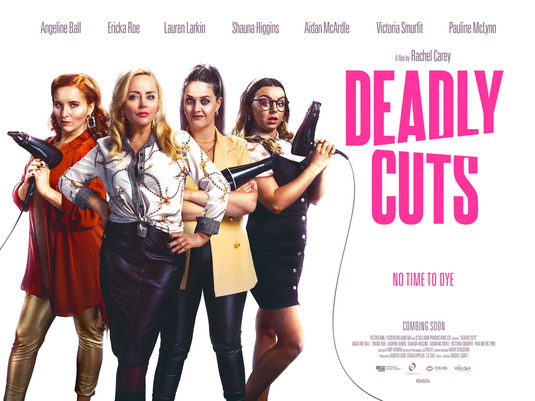 New Irish movie ‘Deadly Cuts’ is set for release today and it does not disappoint.

Film director Rachel Carey stunned in a sequin dress as she explained why she felt compelled to write this movie while thanking the audience for supporting Irish cinema and giving special mention to the cast seated in the audience.

“I wrote this film because I felt that there was a huge gap, and an absence of, a young female – particularly a working-class voice – and comedic voice, and that story being told authentically on screen and not with bad fake Dublin accents that were put on. I couldn’t believe it when I found the gems that I did to bring those roles to life. Laugh loud, we need to hear it God knows, and thank you so much for coming.”

Angeline Ball wowed in her role as Michelle, owner of ‘Deadly Cuts’ salon, girl-boss, and maternal figure to her team of hairdressers which include Stacey (Ericka Roe), a stylist who will do anything to win an upcoming hairdressing competition, who delivered some of the funniest one-liners in the movie and creator of the iconic ‘Pinglinstown Pony’, Gemma (Lauren Larkin) the more reliable and grounded friend who always there to listen, and Chantelle (Shauna Higgins) a shy, socially awkward, young girl but a genius when it comes to the science of hair colour.

The medley of personalities provides for great comedic entertainment as the characters fight – literally – to be crowned the winners of the ‘AhhHair’ (read that back in a Dublin accent) competition and save their salon from being shut down by politician Darren Flynn (Aidan McArdle) due to the gang activity in the area lead by Piglinstown villain, Deano (Ian Lloyd Anderson).

Anderson was outstanding in his role and had the audience truly loathing his character – the epitome of great acting.

While there is crime and violence throughout the film, the gore is less graphic, and more parody, and it is sharply contrasted by the character’s close bond and connection to each other.

The North Dublin humour is quick-witted and brash, and this is even more obvious when compared with their overprivileged Southside rivals Pippa (Victoria Smurfit) and her team of hairdressers and makes way for a brilliant satire of class distinction.

It is out in cinemas from today, October 8 onwards and is a great way to support Irish cinema, while also laughing your hearts out.