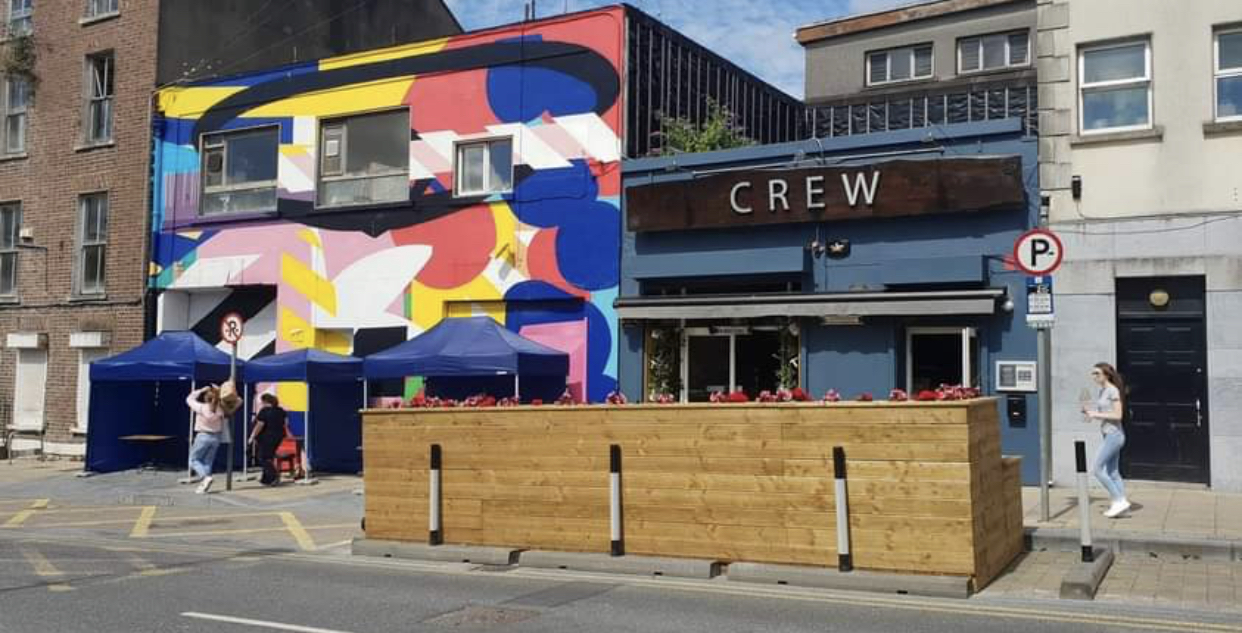 The Crew Brewery is a microbrewery combined with a pub located on Thomas Street in the heart of Limerick City.

The premise of the business is to create premium quality craft beers, available exclusively from the Limerick pub, in an effort to connect with clientele on a personal level.

Co-founder and master brewer Jono Crute sat down with Limerick Voice Reporter, Paige Foley, to discuss their interaction with the local community as well as the setbacks they have faced as a new business due to the Covid-19 pandemic.

The Crew Brewery was originally conceptualised in early 2019, with plans to open its doors for the first time in April of 2020.

Problems first started to emerge in November 2019, when the company’s manufacturer was forced to shut down after facing difficulties sourcing the apparatus needed due to the reliance on stock coming from China, which were experiencing the emergence of coronavirus.

This was the first time the company suspected they may be impacted negatively by Covid-19.

This was then further exasperated when builders and equipment fitters were not allowed on site when restrictions began to be implemented and this ultimately led to the delay of their grand opening due to the first national lockdown.

Speaking on the delays caused by the Covid-19 pandemic, Mr. Crute stated: “We wouldn’t be critical, to be honest, of the restrictions because we were happy to be closed in order to keep people safe… but for a new business, especially one funded by investors it’s not ideal to open with the added stress but were open now and despite some covid measures in place it is not affecting us too much as the moment.”

Crute went on to explain that whilst they have recovered from the difficulties brought about by the lockdowns, others haven’t been so lucky.

Speaking openly on the government aids given to the hospitality sector, he added: “While the aids affected every business differently, we were pretty badly affected because a lot of it was based on financial performance from previous years, and we didn’t have any, so it was hard to qualify for any of the supports available.”

Due to this lack of government aid, the Crew Brewing Co. had to rely on personal, business savings, and investment funds as well as loans to keep the business afloat throughout the lockdown periods, which proved to be a challenge.

Working with the local community:

Now that they are open, the Crew Brewery prides itself on connecting with its local community.

They do this through a sequence of efforts such as their ‘Staff Series’ wherein a staff member conceptualises a unique IPA flavour and a portion of the earnings goes towards a Limerick-based charity of their choosing.

As well as this they are launching a bi-annual event where they select a different local artist to paint a seven-meter mural along the back wall of the pub.

Originally, they planned to hire just one artist to paint the mural for them as a once-off project.

However, upon advertising looking for an artist, the brewery was inundated with applicants, receiving more than 100 submissions, encouraging them to change the mural into an exhibition of sorts, showcasing local talent.

The mural will be changed in April and October each time being painted by a different Limerick-based artist and marked by a launch party in the pub.

Further, he stated that whilst this not only provided a platform for local artist to showcase their work it also allows for the pub to be transformed into a new aesthetic every couple months for them and their customers to enjoy.”

Despite falling on hard times, the Crew Brewery Co. is looking forward to what the future holds, and where their business ventures will take them as they grow and prosper, making up for valuable lost time. The future is bright.

Follow the Crew Brewery Co. on Instagram @crewbrewco and keep an eye on their fun, new flavours of beers launching each week.