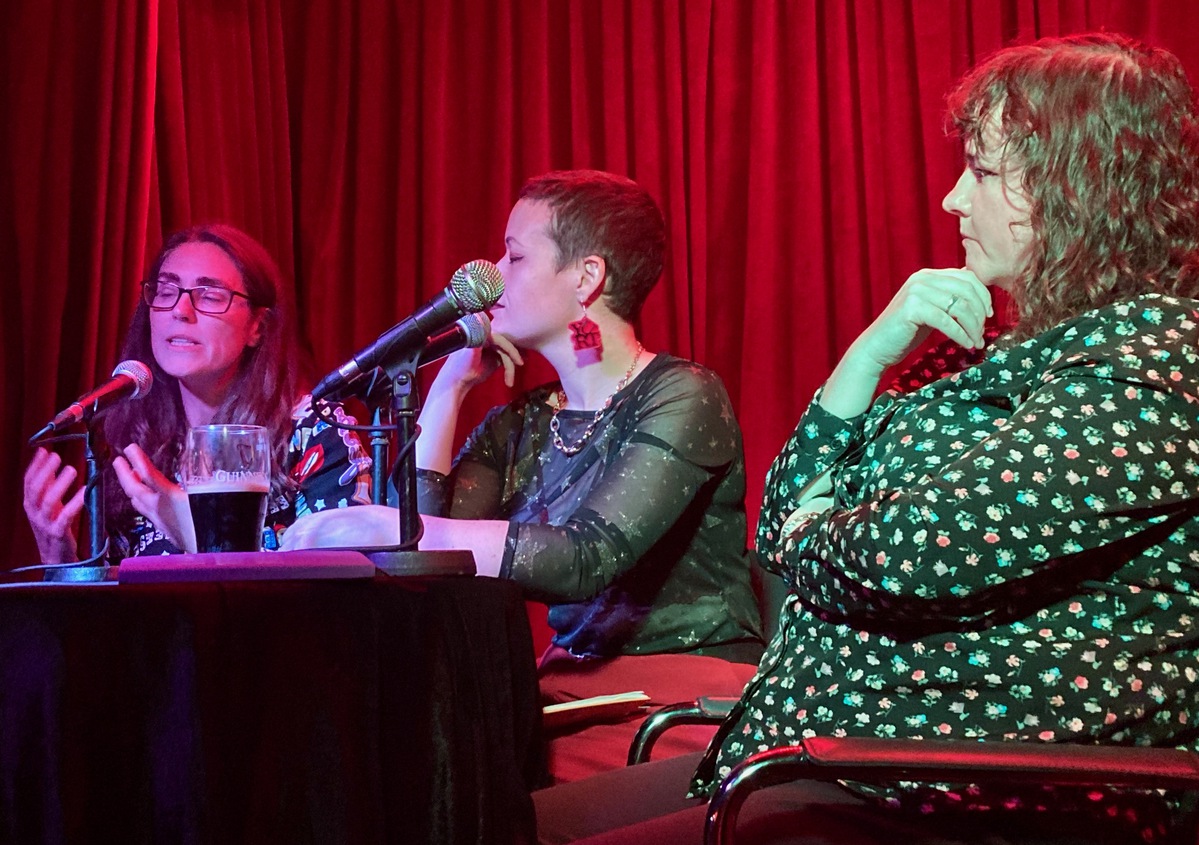 The podcast is hosted by local songstress Emma Langford and performer Ann Blake. Founded in 2016, the podcast is recorded in Limerick City and tends to focus on topics surrounding gender equality, representation and opportunities in the creative industry.

Taking to the stage, Emma and Ann began with their usual opening banter, imitating the intro music that would normally accompany the recorded podcast. They welcomed the crowd, mentioning that this was the second live episode, the first having taken place on International Women’s Day in 2020 right before lockdown. The pair joked, “If the world shuts down again in about two weeks, it wasn’t us!”

Sharon Slater was then welcomed to the stage and began to speak about prominent Limerick people who have made waves within the LGBTQ+ creative community. Sharon is historian in residence at Ormston House and this studious side of her shone through, while still being able to have fun with the hosts and the audience.

Sharon went on to talk about how Limerick’s incredible architecture inspires her to research buildings, saying “you have to go backwards to go forwards”. Sharon apologised for going ‘on a tangent’, to which Emma Langford hilariously cried out “Back to gays!”, which got a wave of laughter from the crowd. After another few minutes of conversation, there was a quick break before welcoming the next act on stage, Limerick musician Abe Soare.

This was an important night for Abe as it was their first performance under their new name, having recently come out as non-binary. Abe spoke about being born in Romania and paying tribute to the culture through their Romanian name, which translates in English to ‘Honest Sun’. Their sleeveless knit vest was chosen deliberately, consisting of the colours of the Romanian flag.

Abe’s first song was inspired by a trip to Inis Mór following a breakup, their deep, genuine vocals and soft Newcastle West accent shining through. During the song ‘Deja Vu’, Abe showcased wonderful lyricism, vocal rasps and a lovely cadence.

This was followed by their new song, ‘Oasis’ which will be officially released on January 12. The stand-out lyrics, “give me answers I am searching for”, reference Abe’s self-identity journey. Audience members listened in admiration, while Emma Langford could be spotted off-stage looking on proudly.

Abe closed their set with ‘The End of the Cornetto’, enlisting some help from the audience with backing vocals, a wonderful way to end such a moving set.

Emma and Ann then returned to the stage to ask Abe a few questions, thank them for coming and introduce the final act, The Wild Geeze.

The act, who describe themselves as a “queer-femme, tree-loving, comedic singing act” that falls under the cabaret genre, comprises of the hilarious cabaret duo Breda Larkin and Miss Laura Lavelle. Breda was sporting a bowtie and bowler hat combo, guitar at the ready; Miss Lavelle a cream satin corset style top, double slit forest green skirt and matching boa.

The duo made it clear at the beginning of their set that they are not a couple, going on to make jokes about their shared love of women and lesbian culture. Their cabaret set included raps, great comedic timing, props and a burlesque show from Miss Lavelle. The crowd went wild, full of thunderous clapping and screams of adoration.

Speaking on the podcast after their act, The Wild Geeze shared that they prefer the vibe of cabaret events to all others, as they’re “much more interactive and welcoming”.

Emma, Ann, Sharon and both acts returned to the stage for the final bows before wrapping the live episode, leaving a buzzing atmosphere in the venue for the rest of the night.