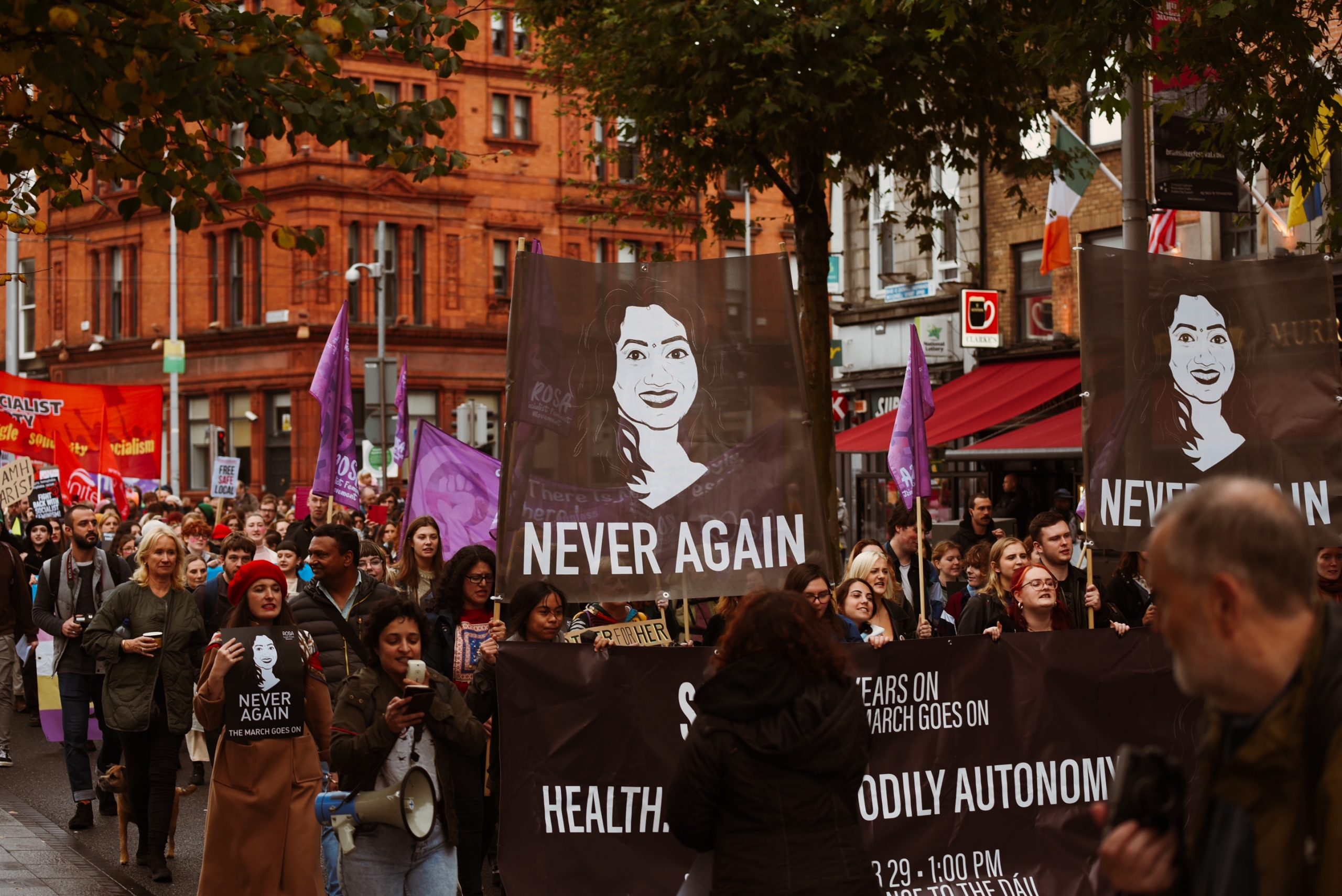 Protestors took to the streets of Dublin on Saturday October 29 to mark the 10th anniversary of Savita Halappanavar’s death. Among those in attendance was Together for Safety Co-Chair and Feminist activist Karen Sugrue.

Together for Safety are a group who emerged in the aftermath of Repeal. They have spent the last two years campaigning for safe access zones outside clinics and hospitals that offer abortion services.

Safe access zones, which would prohibit anti-abortion protests from taking place outside hospitals and clinics, were originally to become part of the legislation that was passed in the landslide referendum to repeal Ireland’s 8th Amendment in 2018.

However, four and a half years later, these safe access zones have yet to be established and abortion services are only being offered by one in ten GPs and 11 out of the 19 maternity hospitals around the country.

“We voted for this in 2018, and then it didn’t come in with the rest of the abortion law, and we were promised that it would come in very quickly,” Karen explained. “By the end of 2020, there was still no sign of it coming in and there were regular [anti-abortion] protests around the Limerick Maternity Hospital.”

Earlier this year, Together for Safety submitted a bill which enforce safe access zones outside of healthcare facilities and it passed through the Seanad and into the Dáil. The Department of Health are currently putting forward their own bill based on the findings of Together for Safety regarding the need for these zones to be implemented.

“The heads of bill designate specified healthcare premises and 100 metres surrounding their perimeter as safe access zones,” Health Minister said when announcing the bill in July 2022.

“The introduction of safe access zones will protect the freedom to access termination of services without impediment and the privacy and dignity of women accessing health services, as well as the service providers, and their staff in the course of their duties and responsibilities.”

“We are expecting that it will come before the Dáil again sometime this autumn so maybe this month, it might be the other side of Christmas at this point and that review is to see how the legislation has been operating.”

Karen said that Together for Safety have been waiting since March to see what will come back from that review on the current 12-week legislation and the implementation of further pro-choice reforms. She said that there are still problems with people having to travel to the UK for healthcare “in their most vulnerable time” and in “a time of great distress, worry and concern”. Karen noted that women and pregnant people were still travelling during the Covid-19 pandemic.

When speaking about reforming Ireland’s current abortion laws, Karen referred to the ongoing impact the overturning of Roe v. Wade in the US: “It shows us that we cannot be complacent for a single second, we need to keep fighting for rights and for autonomy and to make sure that everybody has the right to access healthcare.”

“They have a right to do it in a manner that protects their dignity, their privacy and their safety,” she continued.

Savita Halappanavar arrived at University Hospital Galway on October 21, 2012 with severe back pain. She was 17 weeks pregnant, and it was found that she was already miscarrying. When Savita and her husband requested a termination of her pregnancy, they were refused as a foetal heartbeat was still detectable. Staff at University Hospital Galway carried out their management plan of Savita’s case on an ‘awaiting events’ basis, and cited Article 40.3.3 as their reason for hesitating to intervene on the morning of October 24, 2012.  Savita developed sepsis as a result of delayed intervention and passed away on  October 28, 2012.

When speaking about why she chose to march at Savita’s memorial protest last Saturday, Karen said, “I will never forget Savita, I was slightly older than her at that time. I have two kids myself and having been through the maternity services, I knew that that could be very easily have been me.”

She continued, “It could very well have been any of my students, my siblings, my friends. If I had a kid who got pregnant at some point, I felt [at the time] that they could be under threat.”

The final published report on Savita’s death from June 2013 states the circumstances surrounding her death specifically on pages 3 to 5 and can be found here.

Find out more about Together for Safety and their campaigns.