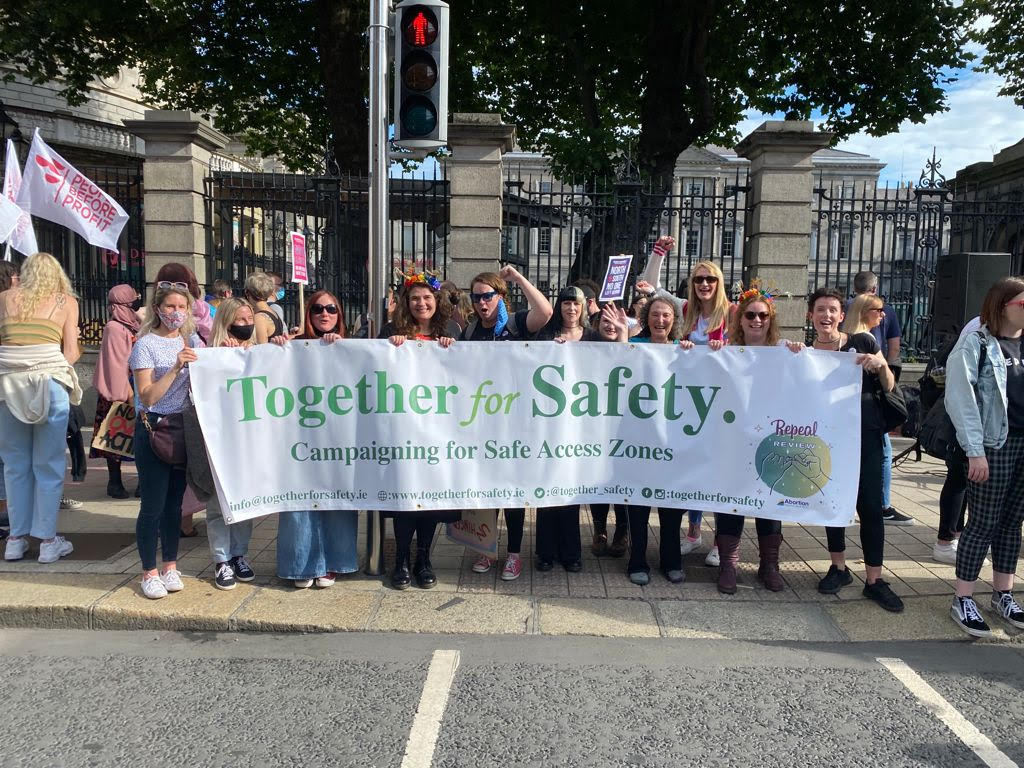 Limerick campaign group ‘Together for Safety’ bill preventing protests directly outside abortion providers passed the second stage on November 10, 2021, in the Seanad.

The draft bill, the safe access to termination of pregnancy service bill 2021, calls for a 100-metre safe access zone anywhere pregnant people are legally entitled to access abortion care, where no conversation about abortion can take place.

“We want to see an immediate stop to the kinds of upsetting protests and activities that we see daily around the country”.

The safe access bill was born out of The Together for Safety group’s response to the growing protests and intimidating practices adopted by anti-abortion groups outside maternity hospitals, family planning clinics and GP offices nationwide.

Irish anti- abortion action groups have intensified their protests since September 2021 by launching the “40 days for life “strategy outside of maternity hospitals nationally.

The strategy, in line with the American model is gaining traction globally, whereby protesters “coerce and intimidate women and doctors outside health-care facilities” according to Dr. Mary Favier, spokesperson for Doctors for choice.

According to Alana Ryan of the National Women’s Council of Ireland:

“We cannot underestimate how difficult it can be for women, pregnant people, and service providers to have to walk by these intimidating placards and to subjected to abuse when they’re just trying to access or provide vital health care.”

Together for Safety canvassed Limerick council, a motion was then raised by Cllr Conor Sheehan that received full cross-party support in calling for privacy and respect for all pregnant people accessing abortion services.

The solidarity displayed by Limerick County Council was unanimous even those who voted ‘no’ in the 2018 referendum offered their support to the patients facing anti-abortion protests outside of University Maternity Hospital, Limerick (UMHL) and other facilities.

Despite assurances been given by the then Minister for Health Simon Harris in 2018 that he would bring forward urgent legislation for safe access zones for doctors and women to access health services in a safe manner.

The legislation was then shelved by current Minister for Health Stephen Donnelly. This bill will ensure redirect from their U-turn and implement the legislation as per the program for government 2020.

Overwhelmed by the support and their achievement, Together for Safety’s other co-convener, Karen Sugrue said: “we are a group of women who started this campaign because we found the protests so upsetting, but we could not have got to this point on our own.”

“We have been guided through this process by fantastic cross-party representatives, civil rights groups, NWCI, legal representatives all worked tirelessly so that our bill protects everyone’s rights.” Ms Sugrue added.

The bill now entering the third stage in the Seanad has been co-signed by members of Sinn Fein, The Labour Party, the Civil Engagement Group, the Green Party and Fianna Fail, as well as the father of the house, Senator David Norris.

Proposing the bill to be read for the second stage, Sinn Fein’s Paul Gavan gave examples of the harassment some women are facing entering hospitals.

The Limerick Senator read out one woman’s experience: “One of the young women from the protest group stood at the traffic lights opposite the maternity hospital.

“She asked if I had an appointment. I presumed that she was making small talk, so I said, yes, I did. She told me that she and her friends were praying that no babies were murdered in the hospital that day and asked why I was attending?”

A spokesperson for the University of Limerick Hospital group said that “UMHL is presently not experiencing issues with patients facing difficulties accessing our services.

We would urge anyone who experiences difficulties accessing our hospitals to contact hospital management without delay,” they added.