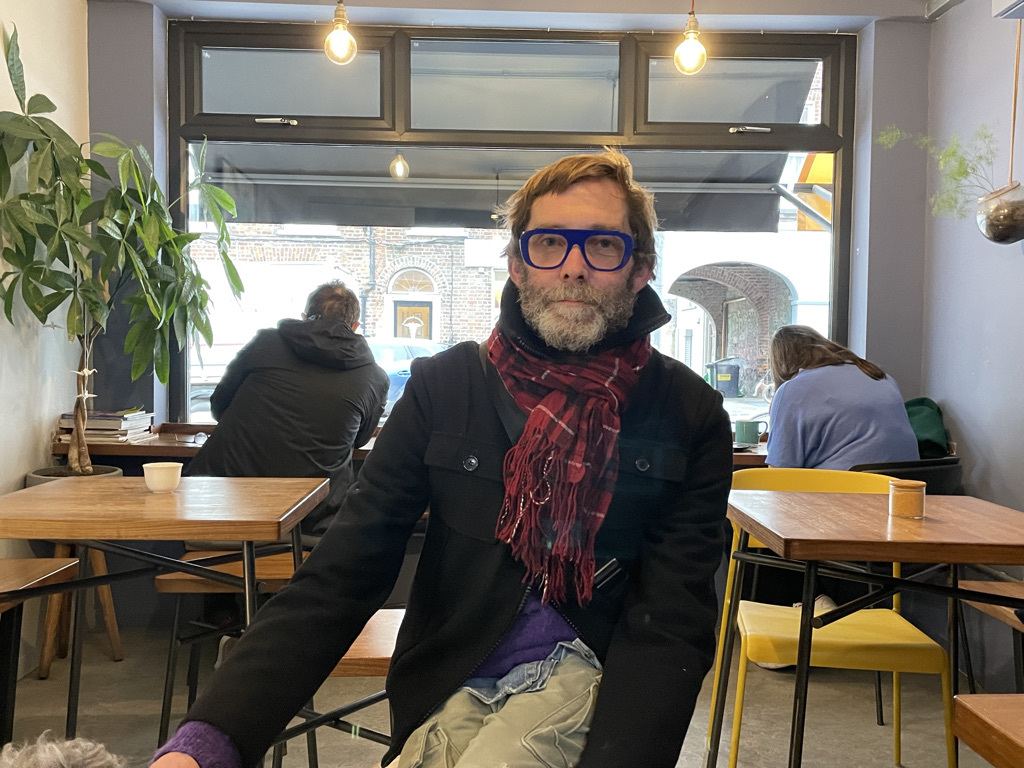 Throughout the Limerick Voice’s investigation on HIV in Limerick the hardest challenge was to get those living with HIV to tell their story.

Many shared their stories, many positive stories emerged. Unfortunately, due to fear induced by ignorance and the stigma surrounding HIV these Limerick people from all walks of life refrained from going on record.

Michael O’Malley a gay man originally from County Limerick, featured in the RTE documentary “the Undetectables”.

He returned to live in Limerick city to care for his mother during Covid.

Despite receiving abuse over the years because of his HIV status, he continues to be a brave advocate to spread the word about this stealthy virus that is raging among us in Limerick.

Limerick Voice reporter Alison Carr met up with Mr O’Malley and Skyler his dog, in Rift Café on Mallow Street. Skyler is a regular in the city centre coffee shop.

Q. How many years have been living with HIV.

I should know but, I was 28 or 29, it’s been over 20 odd years. Back then I was on 14 tablets a day, we did not know how to control it people were still dying. These drugs were causing so many other complications, today with advancements in medical science I am on one tablet and healthy. I’ll probably live longer than most people.

Q. Was it difficult telling people you were ‘Poz’?

At the start I was extremely open about it. A. You must be honest to yourself and B. with other people, there were still a lot of people who wanted to have unprotected sex including myself. Then the abuse started. People were ignorant back then. U=U If your viral load is managed you may have unprotected sex with your partner.

Q. Dating, when do you tell someone you are HIV positive?

As Panti says: “Every time you go on a date it’s like coming out all over again.”  Is it during the throws of passion do I tell someone? Do you sit down before you kiss the person and tell them? During dinner pass the salt by the way I have HIV. It is hard, it is something I must live with. It is about honesty, as someone once said to me: “if they react badly, they’re probably not for you.”

Q. Have you experienced stigma?

Over the years I was getting abuse, abuse from gay people, the language they used was “unclean” and that was from my own community. I became less public about it. With this complication in my life, I began to drink too much. After a breakup due to HIV, I realised it was a trigger and that is what got me to go into therapy.

People were attacking me, and this was part of who I am. It weakened me a lot as a person, it knocks your self-confidence. It can eat into honestly in relationships, its constant but now I know HIV is not just who I am. That has been part of the arc of me living with HIV.

Q. Have you ever come off your meds, if so, what happened.

I’m undetectable now, one tablet a day ‘symtuza’. I was undetectable for years.  Back then, you had multiple meds you had to take at certain times. I would forget to bring them out, I’d remember my eye gel but forget my meds so I stopped taking them.

I was fine I thought, then Michael my best friend got sick and died.  He was the loveliest soul from the west of Ireland, he was my wingman, we fought over the same men, he was my rock. That changed everything for me, so I went back to my consultant and started to look after myself.

Q. Why is it so important that Limerick has a consultant to deal with HIV patients, what exactly do they do?

It is shocking Limerick do not have one presently. Not everyone can take the same meds, it is a multi-disciplinary approach because people with HIV get weird things, skin problems, you need psychological supports, dermatologists, pulmonary experts, social workers, research academics, there is a whole team orchestrated by the consultant. I am fortunate I can afford to travel. It costs €250 for a visit if going public travelling to Dublin or Cork, the travel costs alone, not everyone can afford it.

Q. Are you surprized by rise in HIV cases and the change of demographic of those infected?

No, the demographic that are presenting with HIV are white heterosexual males using steroids in gyms. Trying to get gyms to come on board, they do not want to engage to be known as dirty gyms. Systematically in hospitals now bloods are taken in A and E departments, they were finding people coming in with unusual complications, Liver failure, women in their 30’s in early stage of pregnancy presenting with problems, HIV was not the go-to thing to look for.

Q. Do you think people are more or, less aware of HIV than 20 years ago?

Ironically less, the demographic that are getting it are unaware of it. Our national schools are not dealing with it. Kids have access to phones earlier yet have zero sexual health education. Middle class parents are shielding their kids. Years ago it was on billboards, tv, gay clubs were throwing condoms around. It is not just HIV, gonorrhoea, syphilis, an array of STI’s are on the rise.

Q. Were you worried about Covid_19?

Between the first and second lockdown my consultant said nobody in the Guide Clinic had contacted Covid. We knew and were aware of the risks and were quite happy to follow the rules. You learn to step back and look at how you live, you eat healthier, keep fit, get enough sleep, you become in tune with your body a bit more.

Q. What do you think can be done to get the message out there?

The government have a certain fiscal responsibility, the HSE too but it must come from the wider community. Limerick is saturated with sporting organisations. GAA clubs, rugby clubs, gyms, schools at a younger age, parents, the Arts, people not living with HIV. We all are responsible.

Q. Finally… where did you get the name ‘Skyler’ for your dog?

From the show ‘the Wire.’