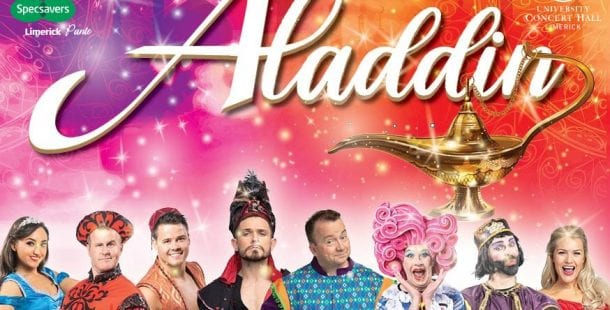 This year’s Limerick Panto, Aladdin, has been officially launched!

The launch of the Specsaver’s Panto was celebrated at a special event this week at the Savoy Hotel.

Speaking at the launch, Mayor of Limerick, Councillor Michael Sheehan, expressed his excitement about the upcoming shows, mentioning that his 10-month-old granddaughter will attend one of them for the first time.

“I am very much at home in the musical and the drama and the panto scene, so therefore, I am delighted that we are with you on this very important occasion.

“Over the past seven years, Christmas in Limerick has been that little bit brighter and more fun in lots of ways, and special thanks to the Panto in UCH for being part of that explosion of brightness and positivity.”

Among this year’s cast are new faces as well as returning UCH panto favourites.

Joining the cast for the first time is Johnny Ward, who is known for his role in Love/Hate and his participation in the finals of RTE’s 2019 Dancing with the Stars, starring as the anti-hero, Abanazer.

Another newcomer Rachel O’Connell is taking on the role of the Genie.

Returning to the cast are Richard Lynch as the Emperor, Hayley-Jo Murphy as Jasmine, and Myles Breen in the role of Widow Twankey.

As UCH board member Lorcan Murray pointed out, Mr Breen will be doing his 23rd panto in a row.

Mr Murray says, “almost 120.000 people have come through the doors over the last seven years and I can tell you that this is going to increase this year.

“Specsaver’s Limerick Panto tickets are the hottest tickets in town.”

For tickets to see Aladdin this year, click here.