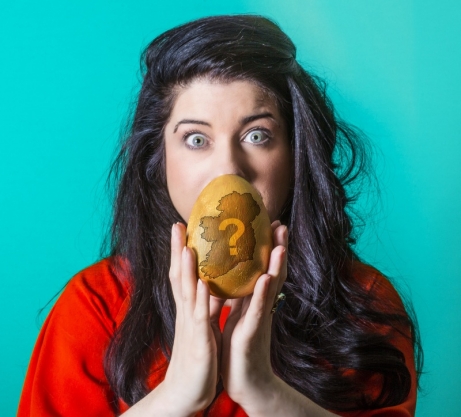 The autobiographical show charts Joanne’s decision about whether or not to have children in what she describes as “the madcap comical journey that I went on” before becoming pregnant with her son.

The topic of fertility which ‘Eggsistentialism’ focuses on is still a subject that many people are reluctant to talk about, according to Joanne. The play challenges this taboo and encourages both men and women to feel comfortable in talking about fertility, having children and the problems that can arise.

Speaking to Limerick Voice about the stigma, Joanne says “culturally we haven’t caught up with the demographic reality. Increasingly, we are not going to have children or are having children a lot older.

“I think if people were more honest, people who don’t have children or are struggling to make a decision about having children would feel less pressured,” she adds.

Joanne is set to perform ‘Eggsistentialism’ at Belltable this Friday, November 29 – the venue where the award-winning play was first premiered three years ago.

Since that premiere, Joanne has performed the solo show at events such as Dublin Fringe Festival and Edinburgh Fringe Festival, allowing it to evolve with every performance.

“I had the opportunity to re-develop it again to reflect personal and political changes. It’s lovely that the show is evolving with me,” she says.

Two different versions of ‘Eggsistentialism’ will be performed in Limerick this Friday as Joanne “decided to put on a series of parent-friendly matinee performances in addition to regular evening shows”.

The decision stems from her own passion to make theatre more accessible to parents as she hasn’t been able to go to the theatre herself since having her baby recently.

As for what’s to come next, Joanne is currently working on a new theatre production called ‘In Two Minds’ which is a show that looks at the realities of bipolar disorder and its impact on relationships. “It’s about a mother who has Bipolar and needs to stay with her daughter while building work is done on her house.” Joanne’s own mother has Bipolar and asked her to write the show. She hopes that the play will premiere in 2021.

For more information on the upcoming Limerick show, click here.