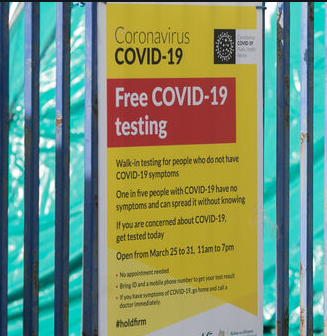 Limerick City Councillor Conor Sheehan is ‘disappointed’ by the walk-in testing site commencing on Mulgrave Street from this weekend.

“Minister Donnelly announced the testing site yesterday and to be honest I’m disappointed that it took the government so long to actually come out with this because rapid testing is key as we need to detect asymptomatic cases in the community and isolate them,” he said.

Given the high incidence rate of Covid-19 in Limerick, the Labour Councillor believed antigen testing will be an essential tool to fight Covid-19, particularly in school settings.

“Antigen testing needs to be rolled out in school settings, where all the pupils would be tested every morning with tests that are over 80% accuracy,” he said.

Councillor Sheehan added, “one of the reasons why we have these levels of restrictions is because the testing and tracing system became overwhelmed.”

“We couldn’t accurately chase the cases in the community, because testing and tracing became overwhelmed which led to widespread community transmission but  I would encourage people to go now and get tested, either an antigen or a PCR so we can reduce infection rates,” he said.

The Councillor added he is concerned about the mental health and wellbeing of Limerick’s community, especially students studying remotely.

“I know from my own experience – because I’m not that much older than the current student population – that it’s heartbreaking to hear students living in a box bedroom on a laptop all day and we need some form of a hybrid model at the very least in September if possible,” he added.

The Councillor called for a second Covid vaccination centre for north Limerick,  after retweeting Minister Stephen Donnelly’s announcement of the test center.

Sheehan welcomed the Radisson Blu Hotel as Limerick’s vaccination centre but believed another centre would be beneficial due to the size of the county and limited public transport.

The Labour Party wrote to Health Minister Stephen Donnelly, asking that they would prioritise Limerick for a second vaccination centre but the Minister would not consider it.

“I’m very disappointed because our vaccination centre is inaccessible from public transport inaccessible to people living in the county and to anybody who doesn’t have a private car.”