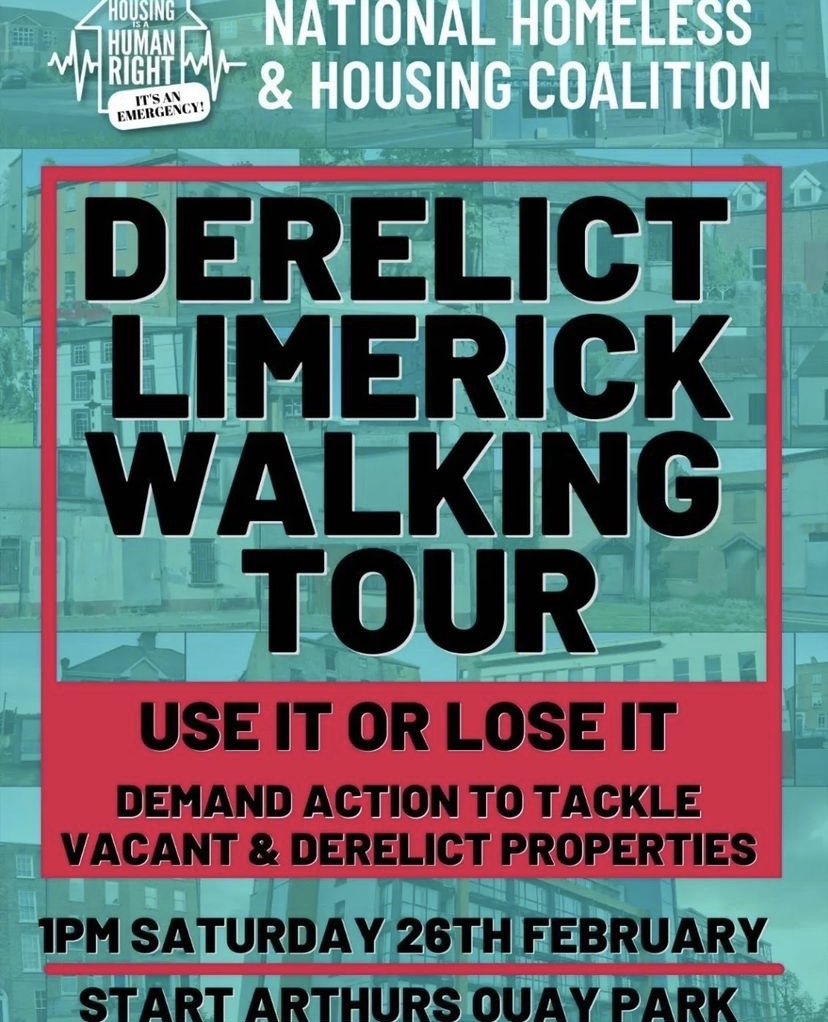 A Limerick lobbying group has scheduled a free walking tour of the city to showcase the problem that Limerick City has with derelict homes across it’s urban thoroughfare.

The National Homeless & Housing Coalition is inviting people across the city and county to join them this Saturday, February 26, for a tour that aims to spark change.

It has recently been reported that there are nearly 300 vacant properties in Limerick city, which has ignited the demand to tackle this issue and take firm action.

The campaign, entitled ‘Derelict Limerick Walking Tours’, begins in Arthurs Quay Park at 1pm and is directly supported by local political parties such as People Before Profit and the Social Democrats, who are all members of the National Homeless & Housing Coalition.

Last week, the Peter McVerry Trust stated that if 10% of the 180,000 vacant properties in Ireland were refurbished, homelessness would be eliminated in Ireland.

“I can safely say there isn’t one street in Limerick that doesn’t have a derelict house on it. When you spot dereliction, you can’t unsee it.”

What started off as documenting various empty and dilapidated plots around the city on social media, sporting the hashtags #VacantIreland #DerelictLimerick and #DerelectIreland, came the followers and the boost that the group needed to organise this walking campaign.

“We need houses, we need to build houses, but this is about the hearts and minds of people – and the community as well.”

Mr Duffy, who is originally from the Garryowen area in Limerick, said that some plots around the city have been waiting for recognition for over 30 years.

“To retrofit something only takes three months – the first five properties on the derelict site register are there 31 years in Limerick.”

Vandalism is another key problem that campaigners strive to highlight, with the former Limerick Tourist Office falling victim to serious damage and graffiti last week.

When asked about the vacant housing crisis in Limerick, Limerick Chamber of Commerce CEO Dee Ryan said: “We recognise that how we use our urban centres has to change,”

“Vacancy is not just a Limerick issue, it’s an Ireland issue and for me, it is the equivalent to visual pollution.”

“Cities are engines for their whole region – making changes that would make Limerick city a more attractive place to live in was the single biggest measure that was recommended by Indecon [Economic Consultants].”

Limerick County Council members including that of Elisa O’Donovan (Social Democrats), Sharon Benson (Sinn Fein) and Cian Prendiville (Solidarity) are all supporting the Derelict Walking Tour’s campaign, as well as organisations such as the Community Action Tenants Union (CATU).

“The walking tours in Cork and Dublin were a huge success to highlight derelection,”

“Limerick has the potential – we just need visionary leaders to do it.” said William Duffy, who will also be speaking on the day.

The walk this Saturday promises to be educational and a ‘bit of craic’, with various architects and historical backgrounds providing the public with information at the event.

Stewarts will also be present on the day for safety purposes and there is a route outlined, showcasing roughly five or six sites.

To find out more about the upcoming event, search @derelictlimerick on any social media platforms or see the poster above.