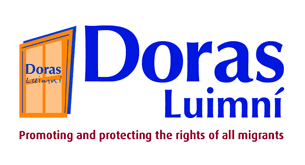 DORAS in an independent, non-profit, non-governmental organisation that works to promote and protect the rights of people from a migrant background in Ireland.

Based in Limerick, DORAS is a migrant support and human rights organisation. It was initially set up to support people coming into Ireland seeking asylum and has been in existence for 20 years.

DORAS is launching a Christmas appeal in the run-up to Christmas to help people who are living in Direct Provision.

John said, “We hope to provide vouchers for the people in our centres. They should have the opportunity to treat themselves to something small at Christmas like the rest of us,”

DORAS will be putting out an appeal for donations in the run up to Christmas. There is a donate button on their website at Doras.org where people can donate.

The organisation is involved in many other areas such as Immigration refugee resettlement in Ireland, anti-racism work, family reunification and Direct Provision.

There are currently 7,000 people living in Direct Provision nationwide in unsuitable accommodation and living off €38 per week.

John said, “People have been living in appalling conditions in direct provision centres around Ireland and we are supporting them as they apply for international protection,”

The Department of Children and Youth Affairs have responsibility for areas in equality and integration. The accommodation of asylum seekers is one of the areas that has moved to this Department headed by Rodric O’ Gorman.

He added, “We hope to see the government honour their commitments they made in the programme for government and to end direct provision over the next couple of years.

“There are cases of people that have been there for years, in some cases there are people who spent a decade in Direct Provision, they need to be able to move on so there are issues in relation to the availability of housing for them,”

In 2002, Direct Provision was set up as a temporary measure to deal with the increasing numbers of people coming to Ireland seeking international protection.

John said, “This temporary measure has been in place for far too long and there was never a political will to change the system.

“A lot of money was made along the way. Most of the Direct Provision centres are being run for profit basis under our companies in Ireland that have made millions out of the system over the years while the individuals that are left languishing in centres are expected to survive on 38 euro,”

The organisation supports between 1000 and 1200 people a year to directly through their services and are heavily involved in campaigning and advocacy.

John said, “We’re linking the two together and one of the big pushes for us over the next couple of months will be to ensure that we are seeing the beginning of the end of direct provision.

“We’ll be asking people to write to your TD’s to emphasise the urgency around ending direct provision. We’ll be involved in anti-racism work, anti-trafficking, and we’ll be looking at issues around education and employment for migrants in Limerick,”

Essential services and supports are not provided to international protection applicants and migrants.

John said, “The human rights of migrants of international protection applicants should be recognised and should be protected in the same way as everybody else in the country,

DORAS hope to set up new volunteering opportunities in 2021. For more information and to donate to the organisation, you can visit www.doras.org.