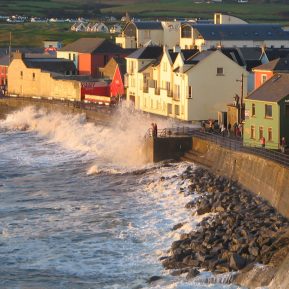 Instead of crowds gathering on Lahinch prom Christmas morning, people will be swimming individually or with members of their respective Covid bubbles over the 25 days.

This year’s Lahinch Christmas Swim aims to raise €10,000 in funding for the Ennis and Clare Samaritans.

Anytime between December 1 and December 25, 2020, you can take the plunge and post your picture on the Lahinch Christmas Day Swim page.

The last two years have seen a surge in the number of people sea swimming all year round.

Michelle Moroney author of The Life Audit, is a health and wellness coach based at the Cliffs of Moher yoga retreat.

Ms. Moroney said she started sea-swimming with Lahinch locals every morning at 7.30 am three years ago.

“It was exhilarating, challenging, and incredibly energy-boosting, now I swim in the Atlantic every morning,” Ms. Moroney said.

A little further down the coast at Spanish point June Curtin will be taking her Christmas dip for the Samaritans also. Mrs Curtin lost her husband to suicide in 2013. Six years after her husband’s death, June Curtin was still struggling.

Unable to swim well, Mrs Curtin went for a quick plunge in the ocean on June 21 2019, and the Snamhai Sasta swim club was born.

The Snamhai Sasta community has inspired many people nationwide in combating depression and grief.

Limerick student Reuben Carr appeared neither exhilarated nor full of energy as he shivered in his shorts at Whitestrand shore.

“This year’s been lame, somedays I feel I don’t want to do anything or know where to start,” Mr Carr said. “I jump in for a few seconds, I feel I’ve accomplished something, and I can do the next task,” Mr Carr explained.

Up until 25 Dec, people all over the globe are encouraged to join the Lahinch virtual Christmas swim while practicing safe social distancing.

If you don’t possess this year’s must-have swimming accessory, a dryrobe, take Miltown Malbay resident Clem Considine’s tip; “Stapling an auld bin bag to a towel does the job!”