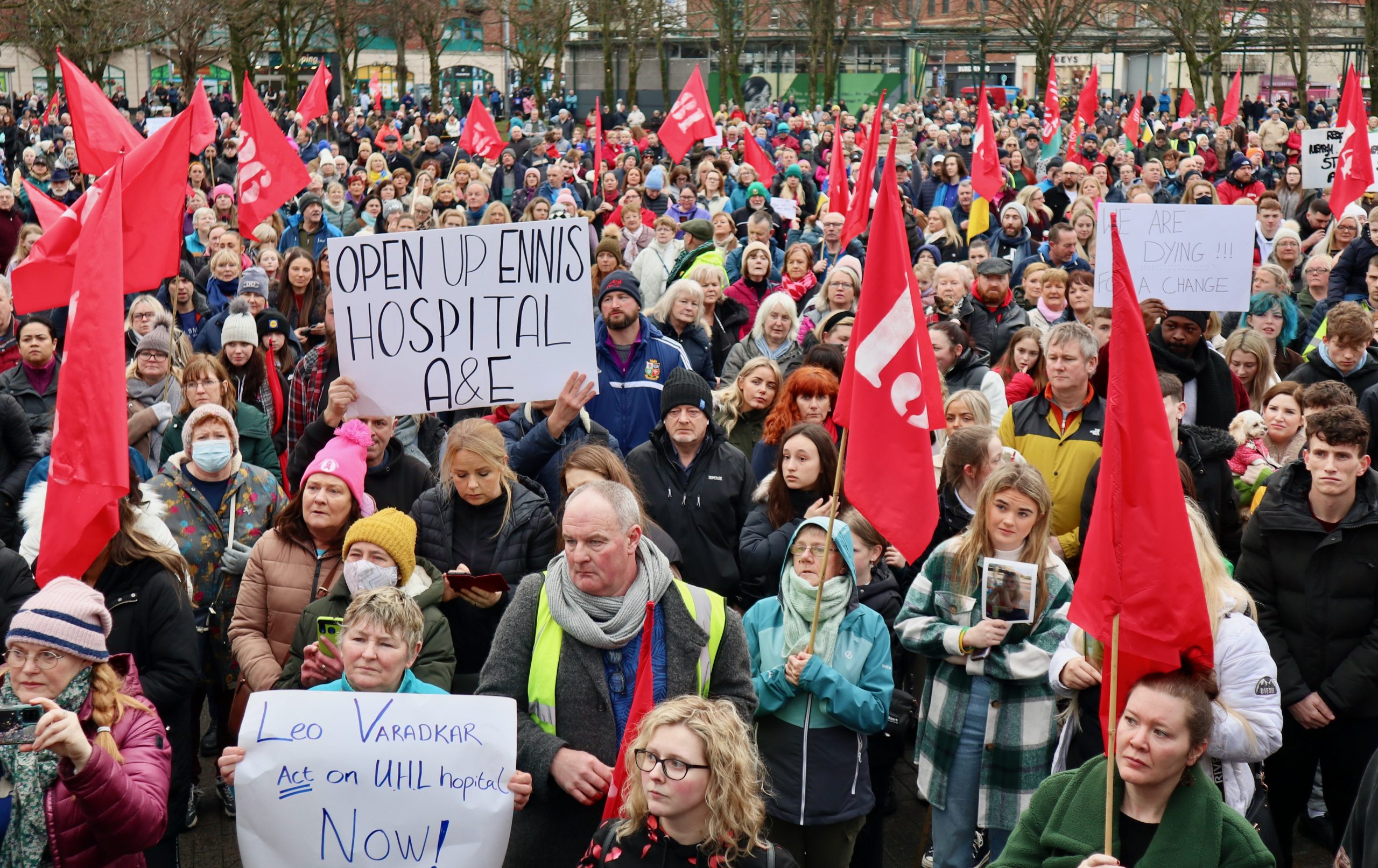 Many protestors from Limerick, Clare and Tipperary carried photographs of loved ones failed by the health system

What would typically be a quiet, late-January Saturday in Limerick was today a scene of outrage, as communities from across the Midwest descended on the city to loudly declare that they had had enough.

Enough of the chaos seen in University Hospital Limerick’s Emergency Department over the past number of months, and enough of over a decade of cutbacks and capacity crises in healthcare settings throughout the region.

Emotions ran high as thousands of demonstrators travelled up O’Connell Street, demanding that the HSE ‘give us back our A&E’s’ in Nenagh, Ennis and St. John’s Hospitals.

Visible amongst the crowd were 126 numbered red flags, which reflected the highest number of patients treated on trolleys in a single day at UHL last year.

Many of those in attendance carried photographs and banners remembering loved ones who were failed by the health system, and several of the event’s organisers, staged by the Mid West Hospital Campaign (MWHC), came with their own stories of neglect and grief at the hands of UHL.

Campaign coordinator Noleen Moran told the Limerick Voice, “The situation is getting worse and worse out in UHL and across the Midwest. At Christmastime in particular, we saw that our only urgent care alternatives, such as Shannon Doc, are not working either.

“We are out here today to say that we are not going to see another year of overcrowding at UHL. We want to see our politicians calling for the reopening of our three other A&E’s. People are dying as a result of being left on trolleys in UHL’s Emergency Department. These are people from our communities, and we are not going to take it anymore.”

A moment of silence was held for 16-year-old Aoife Johnston from Shannon, County Clare, who died at UHL last month after spending up to 16 hours on a trolley. Melanie Cleary, whose daughter Eve, 21, also died after a chaotic stay in A&E, told crowds that her child “should be here today”.

She added that her family “has never been listened to by local politicians when we have approached them for help”.

“Over the years,” she said, “I have had messages and phone calls from other families seeking advice on their loved ones. How sad is this, that we have been so let down in the Midwest we seek help from other victims of UHL?”

Limerick Voice spoke to several protesters about their decision to join this morning’s demonstration. Caitriona Queally, who suffers from a long-term illness and is regularly hospitalised, told of days and nights in UHL “not even on a trolley, but on a trolly chair”. Her experiences have led her to feel that she “would nearly rather stay at home and die than be in UHL when I need to be in hospital”.

Sean O’Chadladh from Limerick City attended the march in memory of his father, who often spent thirty-hour stints on trolleys in the last few months of his life, before passing away five years ago.

“This is a situation that doesn’t suit anyone except the government, who are holding back on investment in healthcare,” stated Clare schoolteacher Caitriona Ní Chathain. Her family has been directly affected by the lack of an emergency department in the county.

As the vast numbers in attendance attempted to squeeze into Arthurs Quay Park at the end of the protest procession, organiser Mike Daly made it clear that today’s rally would not be the last.

Find out more about the Midwest Hospital Campaign.