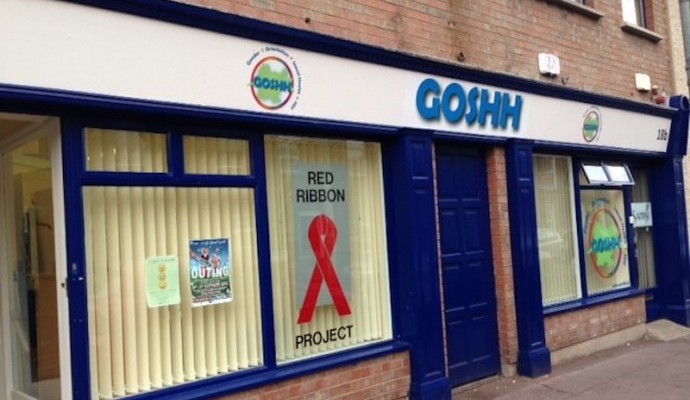 By: Nicky Anderson and Cathal O’Sullivan

A Limerick gay men’s health service remained open for the majority of lockdown offering essential HIV testing, despite closures in the capital.

The HSE’s Gay Men’s Health Service clinic in Dublin has remained closed since the initial Covid-19 lockdown in Ireland in March 2020.

When speaking about the need for gay men’s health services Ann Piercy, Personal Support Worker, of GOSHH Limerick said: “I wouldn’t say that because of the lockdown people have stopped being sexually active. When people come in for testing, you are asking where and what have the risks been to you.”

As GOSHH have outlined rapid HIV testing is ‘classed as an essential service.’

“It’s very easy for people to get a rapid HIV test with us. We give them a time that suits them and because of the lockdown we have our appointment days and they won’t have to sit at home waiting a week to access a hospital,” Ann explains.

The GOSHH office is based in Limerick City and they work throughout the counties of Limerick, Clare, and North Tipperary providing free rapid HIV testing and PrEP services.

PrEP is a medication taken by HIV-negative people to reduce the chance of getting HIV from having sex without a condom and from sharing needles or equipment to inject or use drugs.

According to the HSE, the GMHS in Dublin has remained closed as a community based STI service during the Covid-19 pandemic because of increased demand at community level for Covid-19 testers, contact tracing and vaccination staff.

Ann Piercey of GOSHH is not a medical professional but like many other members of the GOSHH team she is able to perform the finger prick HIV test.

“Anyone who is trained to do the test can do it. Our services are non-clinical services. You can come in as a volunteer and we will train you how to do it over time.”

When a result is positive a member of GOSHH will refer the patient to a clinic for professional consultation.

The GMHS website states that “A phased reintroduction of the STI services is currently underway, and all services will be delivered in accordance with current Public Health COVID-19 guidelines.”

Rory (23), a University of Limerick student and member of the LGBTQI+ community, said it is “diabolical” that the GMHS has been closed for the most part of a year.

“I think the initial closure made sense, but the continued closure just doesn’t, and I think if it was any other type of health service it wouldn’t be the case and I think that kind of still falls into total Ireland Catholic guilt situation where people generally don’t want to speak up about it because it is probably still considered taboo by some people, like the whole idea of sexual health clinics and people using their services.”