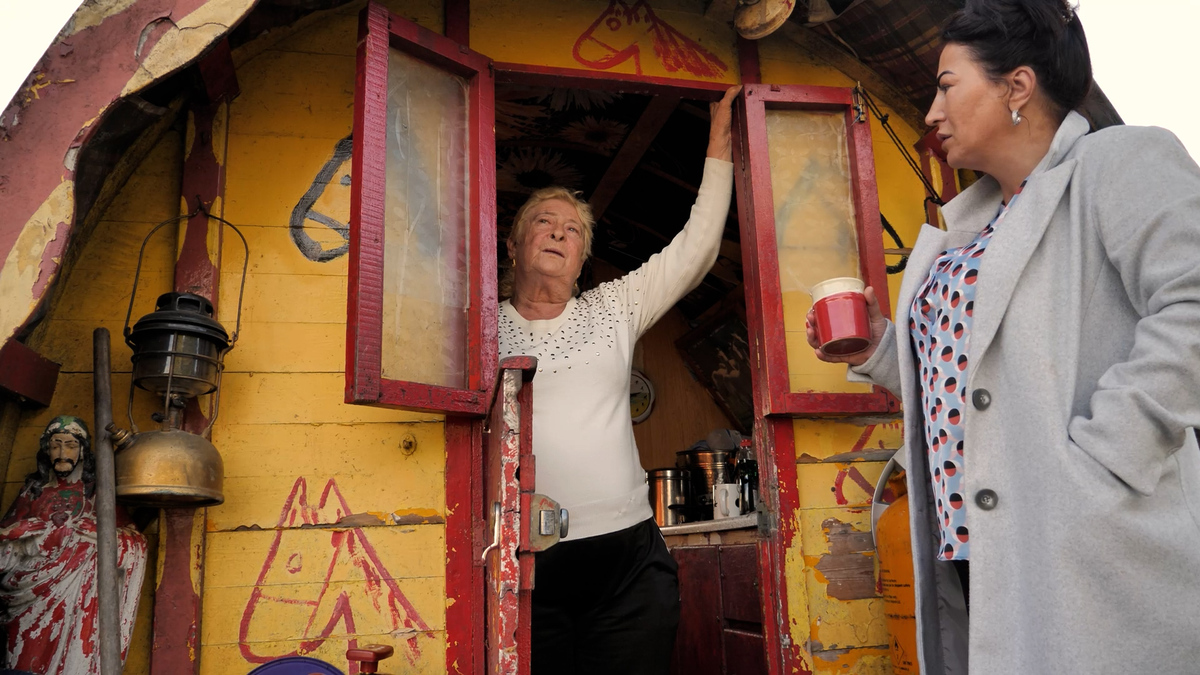 Limerick based Traveller activist, Mags Casey, says it is despicable to see replica Traveller wagons being used by tourist companies throughout Ireland, while Travellers themselves have seen their own culture being made inaccessible due to state enacted legal restrictions.

Mrs Casey, who lives in Limerick, but works with the Tipperary rural Traveller project, said:

“Nowadays if a Traveller wants to see or experience a part of their culture, like wagons, they must either pay to see them in a museum, or pay to rent them out from a tourist company”.

As part of a project looking to catalogue the oral history of Traveller elders, Mags spoke on camera to Nelly Reilly, who lives with her husband Willie, in a traditional styled Barrell top wagon that is synonymous with Traveller tradition, heritage and culture.

When asked how she feels when she sees non-Travellers freely traveling on Irish roads, unimpeded by Gardaí, Nelly said:

“It makes me very sad, it’s like they’re taking our culture from us”. Mrs Casey also added to this by saying that after the 2002 anti-trespassing act, Travellers were forced off the road, in what she calls “forced assimilation and integration, without ever properly consulting Travellers”.

The Anti-Trespass act Mags is referring to was rushed into effect before the general election in 2002, something many Travellers feel was an attempt to garner votes.

Section 24 of the Housing (miscellaneous provisions) act, 2002, prohibits anybody from occupying land where there is a likelihood of damage being made to land or its amenities.

However, this act also means that council land is protected under the law. The issue Mrs Casey sees with this is that Travellers have been traveling throughout Ireland for centuries and are now reduced to finding shelter in laybys or forced into halting sites.

This is visibly noticed when driving on roads across Ireland, where large boulders and concrete blockades can be seen, which are an attempt at preventing Travellers from parking.

When the act was put in place, Travellers were ensured that more halting sites would be built to accommodate Travellers. However, every year, local authorities neglect to spend allocated Traveller specific accommodation budgets, with millions being sent back each year to the state.

Mrs Casey mentions that nowadays people are eager to live for a few days in a Traveller wagon because they now suddenly see them as being “nice”, although, she said that “they weren’t seen as nice when we lived in them”.

Living in a barrel top wagon

Nelly and Willie Reilly, who have never lived in a house, are the last remaining Travellers known to be still living permanently in a barrel top wagon, something they are very proud of.

When asked what significance the wagon has to her, Mrs Reilly replied:

“It means a lot to me because I was reared in one, and my father used to build them, so it a traditional thing to us, we love the wagons”.

Mrs Reilly also told us that she raised 8 sons and 3 daughters in her wagons, and now they are all either living in contemporary caravans or houses, largely due to the skills of wagon building being lost throughout the years because of a lack of demand.

Mrs Casey’s wagon, which is painted in bright yellow and red, with the traditional green tarpaulin roof, requires regular upkeep and maintenance.

Sadly, there are no current provisions in place to support the preservation of these wagons, this is in stark contrast to the significance placed on other Irish heritage and dwellings like thatched cottages.

Thatched cottages are supported through thatching grants, which help preserve these homes across the country. Mrs Casey believes that the same should be done for Traveller wagons, which are of equal significance when we look at the preservation of Irish heritage.

“We are Travellers, and we are Irish. Our culture needs to be protected, not left to rot away”.