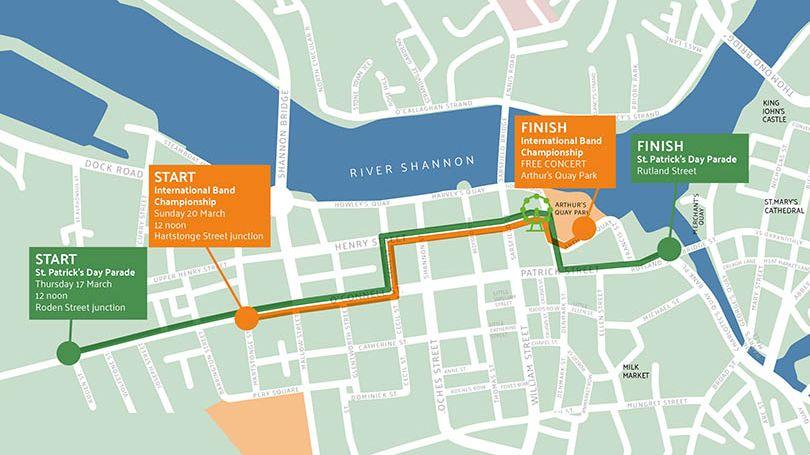 After a two years absence due to the pandemic, the annual procession returns to the Treaty City this year, but there are alterations to the traditional route.

Ongoing works on O’Connell Street mean the parade will divert onto Henry Street for a brief detour, before turning right at Arthur’s Quay and joining back up with the conventional path on Patrick Street.

Like previous years, the Assembly Point is Sarsfield Barracks, with a starting point at O’Connell Avenue, Roden Street junction at 12pm.

After continuing up O’Connell Street, the parade will turn left onto Cecil Street for its aforementioned detour before passing the viewing stand, located near Arthur’s Quay Park (at the junction of Liddy Street and Honan’s Quay).

The parade will end at Rutland Street by Matthew Bridge.

The Band Championship has a similar but shorter route, beginning at Hartstonge Street Junction at 12pm on March 20.

The music showpiece will move onto Henry Street via Cecil Street, but unlike the St Patrick’s Day parade, it has an earlier finishing point, culminating in a jamboree at Arthur’s Quay Park.

This concert will be free to the public and it is also where the winners of the competition will be announced.

The route isn’t the only new addition to this year’s parade.

For the first time, Limerick City and County Council has partnered with ASD Ireland to create an area along the route specially made for people with sensory issues.

A special autism-friendly area will be located along the route at the Crescent for both days, and will feature a sensory room, covered marquee and seating area.

Access to this area will be limited with special wristbands being provided by ASD Ireland.

For more information on the ASD area and how to apply for access, those interested can check out asdireland.ie.

There are also several other events happening throughout Limerick as part of the St Patrick’s Festival. Full information on these can be found on limerick.ie.