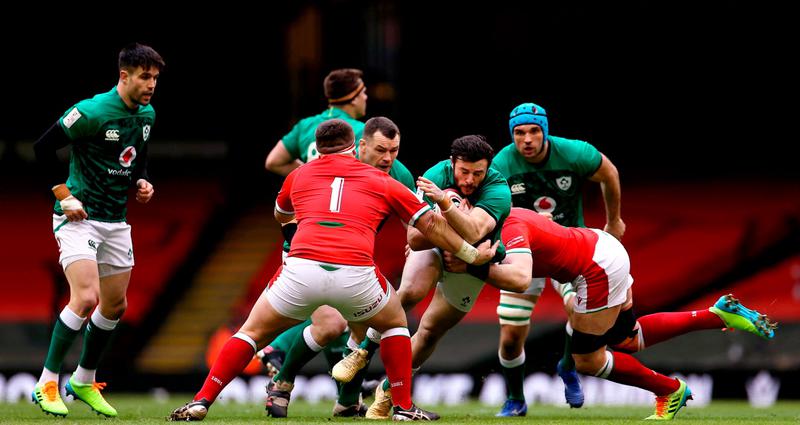 Ireland fell to an opening round defeat in the Six Nations as Peter O’Mahony’s sending off proved the key moment of this absorbing game.

The Munster man was penalised for elbowing Tomas Francis in the opening half as Andy Farrell’s side spent over an hour with 14 men.

Despite this Ireland spurned a golden opportunity to salvage an unlikely victory as substitute out half Billy Burns missed touch when trying to bring Ireland five metres from the Welsh line in the final passages of the game.

Andy Farrell’s side now face a must-win game against France next Sunday.

An early Leigh Halfpenny penalty helped Wales move in front after a Johnny Sexton grubber kick was charged down. Ireland did look dangerous in attack in the early stages when Hugo Keenan brought Ireland to the Wales ’22 after a Garry Ringrose offload.

Ireland suffered a huge blow when Peter O’Mahony was penalised for a dangerous cleanout on Tomas Francis. The Welsh buoyed by their numerical advantage went through the phases before Sexton was penalised for a high challenge just outside the Irish ’22. Halfpenny slotted the three points to increase Wales’ lead.

Ireland came straight back and after a Sexton garrowen, James Lowe surged in to the Welsh ’22. Andy Farrell’s side went through the phases before Sexton knocked on with Ireland making progress.

Sexton did manage to halve Ireland’s arrears after Josh Navidi was penalised at the breakdown. Ireland continued to grow in confidence with James Lowe and Keith Earls making incisive breaks but Wales stripped possession and the momentum was lost.

However, Ireland did win a penalty at the breakdown after the men in green held out with their own scrum despite only committing seven bodies to it. Sexton levelled the game with five minutes to go before the break.

Wales lost a line out inside their own 10 metre line and they were severely punished after a Robbie Henshaw line break and offload to Josh Van der Flier led the backrower to be stopped short of the line. Tadhg Beirne reacted quickest to dive over for the try with Sexton adding the extras.

The start of the second half was scrappy with Taulupe Faletau knocking on as Wales tried to build pressure inside the Ireland ’22. However, Ringrose knocked on from the resulting scrum and George North cut through the Irish defence to cross the try line. Halfpenny missed the resulting conversion.

Ireland failed to build upon any momentum they did generate with Sexton being stripped by Tipuric when the Irish captain brought play up to the Welsh ’22.

Wales were struggling to punish Irish ill-discipline as they lost a line out inside Ireland’s ’22 but Keith Earls kicked out on the full to hand Wales another chance.

After Ireland infringed at the maul Wales went wide with Louis Rees-Zammit crossing for his first try in the Six Nations as Halfpenny added the conversion.

Ireland continued to battle manfully but Rob Herring was penalised for crossing with Wales kicking the penalty to the Irish corner. Beirne infringed at the breakdown as Halfpenny kicked the straightforward penalty.

To further rub salt in Irish wounds, Johnny Sexton was forced off after suffering a head injury at the breakdown. Ireland attacked the Wales try line moments later after a line break by Burns. The Ulster man kicked a penalty after Alyn Wyn Jones infringed five metres from his own line.

Ireland were unable to find the try needed as they must regroup ahead of their trip to Paris.