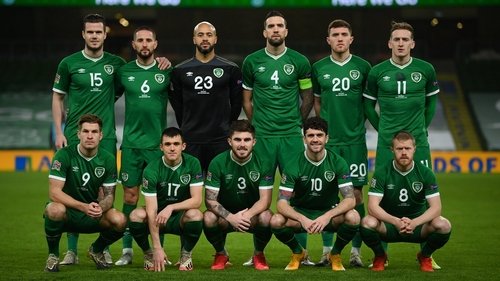 After the Republic of Ireland’s defeat to England, Stephen Kenny’s side did not see an upturn in fortunes as they slipped to a 1-0 defeat to Wales before a scoreless draw against Bulgaria.

Here we pick five talking points from the pair of games as the Republic of Ireland ensured survival in Nations League B but were unable to secure second seed status for the 2022 World Cup qualifiers.

Of the original 26 players called up by Ireland manager Stephen Kenny, only 12 were left by the time the referee blew the full-time whistle against Bulgaria.

This was due to injuries, suspensions and Covid-19. Any national team that loses 14 of its original call-ups is going to be affected and the results over the week have proven this.

Across two Nations League campaigns consisting of 10 games, Ireland has picked up five draws and scored only two goals.

Shaun Williams got the Republic of Ireland’s goal for anyone who has wiped away the memory of that 4-1 hammering against Wales in September 2018. Shane Duffy scored the other against Bulgaria two months ago.

It’s a far cry from the era of Robbie Keane reliably tucking away a goal or two per game.

Without Darren Randolph and a defence which prides itself on being difficult to break down, the results could be worse.

The League of Ireland midfielder was one of the best players on the pitch against Bulgaria on Wednesday night. Quite the accomplishment considering he played just over fifteen minutes.

Ever since Wes Hoolahan retired from international football, there has been a severe lack of creativity which Byrne provides in spades. If given the full 90 in the future, chances could be a lot more forthcoming.

The kids can shine going forward

If this campaign has proven anything it’s that the future is bright with prospects coming through.

Dara O’Shea has been a particular bright light in what has been a demoralising 2020 for Ireland. The young centre-back has been deployed across the backline showing versatility and maturity beyond his years. His development over the coming years is sure to be a benefit for the Boys in Green.

In midfield, the trio of Jayson Molumby, Jason Knight and Jack Byrne have all had their moments in this campaign and one can only imagine the potential if these three were to be deployed at the same time. Each offers energy, tenacity, skill, guile and a pride in wearing the jersey.

The intensity these three provide could improve Ireland’s midfield.

Rome wasn’t built in a day

This run of results has been coming for a long time.

Scraping wins against Georgia and Gibraltar are the only positives in recent times. For this reason alone, Kenny deserves time.

Not to mention he is blooding young talent which has not been seen in some time.

The upcoming World Cup qualification group will be the ultimate acid test.

Only then will we know if he is the right man to take Irish football back to a major international tournament.

Considering the average age of the squad and the fact that the World Cup qualification campaign doesn’t start until March 2021, Kenny and Ireland need to hit the ground running.