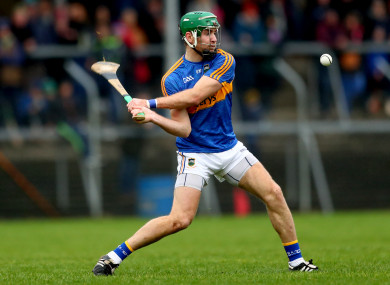 Three-time All-Star winner Noel McGrath has highlighted the importance of men being able to speak to someone about mental and physical problems nowadays.

The Tipperary hurler was diagnosed with testicular cancer in April 2015.

April is Testicular Cancer Awareness Month and Noel has encouraged people to check themselves regularly and speak up if they notice something irregular.

Speaking of when he noticed something wasn’t right, Noel said:  “I was in the gym one evening and I was lifting a bar and whatever way it rubbed of my body it just didn’t feel right. I kind of knew there was something wrong. I was putting it down to a belt I got in a match a couple of days before.”

“I brushed it off for a couple of days, but I wasn’t going away after that, so I knew it was something a bit more serious. From there it became more pronounced and it was bigger than it should’ve been, that’s when I decided to go to the doctor.”

“In my own head I was thinking of what might be wrong, what it could be, but you don’t really want to be told what it is. At the end of the day I knew I needed to ask somebody for help because it wasn’t going to get any better if I didn’t.”

“That was the biggest thing I took out of it, nobody should ever be afraid to ask for help no matter what issue It is, in whatever walk of life. There is always help.”

At just 24-years-old, Noel never expected to be told that it was cancer.

“You never think that its going to happen to you. It takes it out of you, mentally and physically, it drains you. Even now, there’s not many days go by that I don’t think of it in some way.”

“I am lucky that I got the help in time and caught it and got out the other side of it with the great help from a lot of good people.”

Noel expressed the importance of having a good support network around you in times where you’re both mentally and physically unwell.

“I got great support from my family, friends, my club. The whole Tipperary panel were very supportive and everyone around the country in the GAA circle. GAA is a very tight-knit community and without their support I would’ve found it way tougher to get through it.

“It’s so important that people have that group of people to have trust in that you can talk to about different things, it makes a huge difference. Holding anything in if there’s anything worrying you isn’t good. A problem shared is a problem halved, that’s the way I look at things.”

The HSE recommends that people should check themselves regularly from around the age of 15.