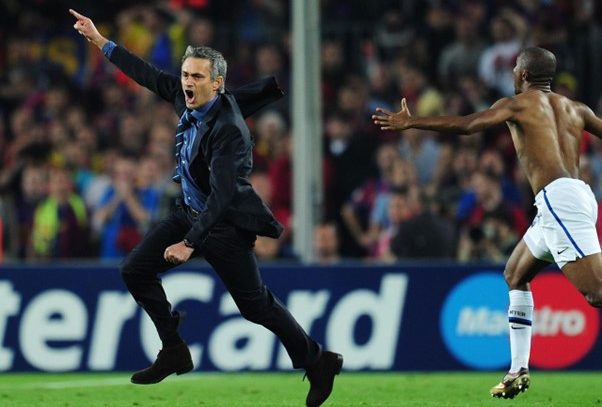 Graham Potter received a difficult welcome on his first trip back to Amex stadium last Saturday. Potter’s new team, Chelsea, would be trounced 4-1 by his former team, Brighton.

Returning to your former club can be a tricky business for managers. Some relish the challenge, and taking the win with your new team is an excellent way of announcing yourself as the next coming force.

However, it can also be a chance for your former players to get one back over their former overseers. Let’s have a look at two managers who would both manage statement wins on their return home.

José Mourinho and Barcelona have a complicated relationship. After working as Bobby Robson’s translator at Sporting Lisbon, Mourinho became an integral part of Robson’s coaching staff, eventually becoming his second-in-command at Barcelona. Mourinho would later become first team coach under Louis Van Gaal. Mourinho eventually grew tired of working for other people and struck out on his own in 2000, managing Benfica, FC Porto and Chelsea to great success.

In 2008, Barcelona was at a crossroads. Frank Rijkaard was sacked, leaving Barcelona with two potential candidates – Jose Mourinho and Josep ‘Pep’ Guardiola. After walking out of Chelsea, Mourinho was arguably the biggest name in football. Having won a multitude of accolades, including 2 Premier Leagues Championships, a UEFA cup and a Champions League, Mourinho was dead-set to go back to Barcelona and show the club how much he had learned since he left. Surely any club would jump at the chance of snatching the best manager in the world.

However, Barcelona is not just any other football club. Mourinho has many strengths, but tradition is not one of them. Guardiola on the other hand, while only the Barcelona B-team manager, was steeped in the club’s history. Guardiola would win and would build arguably the greatest club team of all time.After Barcelona snubbed Mouriniho, The Special One vowed revenge, which came in the form of the 2010 Champions League semi-final. This would be Jose Mourinho’s greatest achievement as a manager, winning 1-0.

With that look at Mouriniho’s triumph of the odds, let’s look at Jurgen Klopp and his run at Liverpool.

It’s safe to say that Jurgen Klopp’s Liverpool had to learn to walk before they could run. After a sticky start with the reds, Klopp’s ‘Heavy Metal’ football finally came of age after an epic Europa League semi-final against his former club, Borussia Dortmund.

A 5-4 aggregate win over Dortmund was hailed as a coming of age moment, with Liverpool coming back from 3-1 down to win 4-3. Even though Klopp’s team would lose the final 3-1 to Seville, Liverpool would reach the Champions League final the next season.

It seems as though regardless of a manager’s style, achievements or history, facing past clubs is never as straightforward as it seems – and should always be approached with caution.