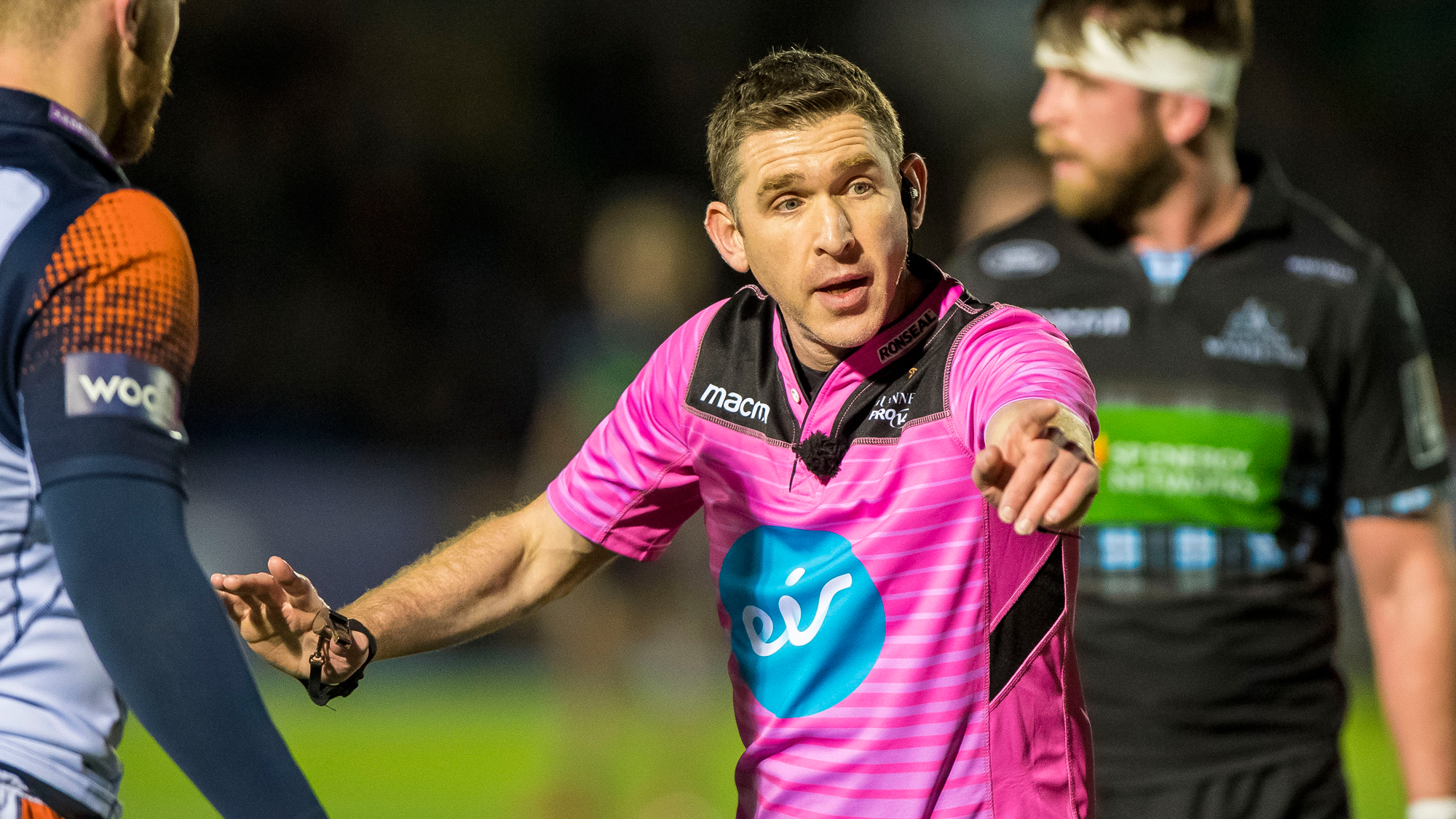 As a Rugby Union referee whose career spanned 17 years and saw him as the ‘man in the middle’ on Celtic League nights, to the heights of a Rugby World Cup opener at Eden Park, George Clancy decided to hang up the whistle towards the end of 2020.

The Ospreys’ 23-15 victory over Glasgow at the Liberty Stadium last October would be the final time in which Clancy fulfilled his match referee duties.

Unknown to him he finished on a milestone number leaving the grounds with his 125th Pro 14 game in the books:

“Someone pointed out to me I got a text message about I didn’t even realise it to be honest. I wondered how many games I’ve done in the Champions Cup and that happened to be 75. So, they were kind of nice round numbers to finish up on.”

For most of his refereeing career, Clancy maintained the ‘day job’ with the Civil Service, finding a balance between the office and the rugby pitch week to week.

However, the recent undertaking of a more senior management role within the Civil Service brought an end to his days as a rugby referee:

“I’ve been very lucky with the civil service; there’s a work-sharing scheme that I was able to utilise for a long time. I was working on a three day a week.

So, I’ll be off every Monday and Friday that allowed me the flexibility to travel to games on the weekends whenever I needed to.”

“I thought I could do the three-day-a-week in the Civil Service and do rugby, but I had no time for anything else in my life: time for family, visit relations or anything else. That’s kind of out the window when you’re juggling both of those things.”

While the strain of trying to balance both roles was acknowledged, Clancy took a career break from the civil service to take up rugby refereeing on a full-time basis in the last two years:

So, while the day is quite busy as a full-time referee (and that’s the commitment that it’s gone to in the last number years) you do have time for other pursuits as well.”

The lesser-known fact of Clancy’s career in rugby was the management of his Type 1 Diabetes. Just over 18 months ago the Limerick native had an insulin pump fitted to his body, which delivers tiny amounts of insulin into the blood throughout the day and night which can improve blood glucose levels and help manage the condition.

“I use exercise to manage the control of my type one diabetes. So, from that perspective, to be getting paid by the IRFU to keep fit is just magical.”

“The last thing that you would want to have happen during a match is that your sugar levels go low. Then you know, you’re in a catastrophic situation, potentially you wouldn’t be able to continue or indeed you’re, you know, before maybe just before that you and your decision making might be affected.”

“That never happened to me, thankfully ever (touchwood!) but at the same time it’s not something that I really wanted to talk about when I was at the highest level, because any poor decision you did make, then people could point towards it.”

If anything, the pump gave Clancy access to more data, something all high-performance athletes crave, in an effort to cover all bases and maintain high performance. His stellar referreeing CV alone demonstrates that he duly did, irrespective of that additional life hurdle.

“So, if that’s something that I’ve never leaned on, or never used excuses or anything like that, or tried to draw too much attention to. I just want to be treated the same way as everybody else. I’m not ashamed of being a diabetic by any means. Of course not. But it’s not something I want to use an excuse at any stage.”

Hanging up the whistle amid a global pandemic comes with a new set of ‘rules’, protocols, and pre-match preparation.

For the Limerick man, the ongoing lockdown has brought time to look back on a long career, including refereeing 46 International games, involvement in two Rugby World Cups, The Six Nations and Rugby Championship competitions.

In the attic of Clancy’s home hold the keepsakes of a refereeing career well-travelled, from the video tapes of his early professional games in 2005/06 often posted to him one week after the game for review (such were the times!), to his 100th Pro14 cap jersey received in 2018, the story of how far both him (and the expansion of rugby union) has come in the intervening years is evident.

In the final weeks of his rugby career in the face of lockdowns, no crowds at rugby matches and reduction in face-to-face contacts, Clancy found himself coming full circle in tune with his early days as a referee:

“With the pandemic it’s gone back to where it all started to be honest with you. In the Pro 14 (then Celtic League) back in 2005/2006 you’d have always travelled on your own.”

“One of the first things I did when I got on the circuit was buy a road map of the UK. I’m going to be renting cars so I wouldn’t get lost when I’d be traveling across the middle of Scotland and places like that.

“Things are different now we’ve got the iPhone hooked up to the car and you get the sat nav down straight there and stuff like that and be playing podcasts all of the way down, so these things have changed hugely in those 15 to 17 years.”

The Limerick man remembers the excitement leading up to a big game.

“It’s not a boring life, the life of a referee, at the top level, it’s not easy, but there’s some great rewards at the same time, geez, don’t get me wrong.”

The life of a professional referee has brought the Limerick native worldwide, opening many doors and experiences at the highest level of professional rugby.

However, his first All-Ireland League (AIL) game in charge will always rank up there as one of his most memorable moments:

“I remember at my first ever game, and I think it was up in Banbridge, (Banbridge against Greystones). I remember blowing the whistle to start the game and pinching myself and thinking ‘well nobody can ever take this away from me that I have refereed in the All-Ireland League’, so I’ve always kind of felt privileged to get the opportunities to referee at those levels.”