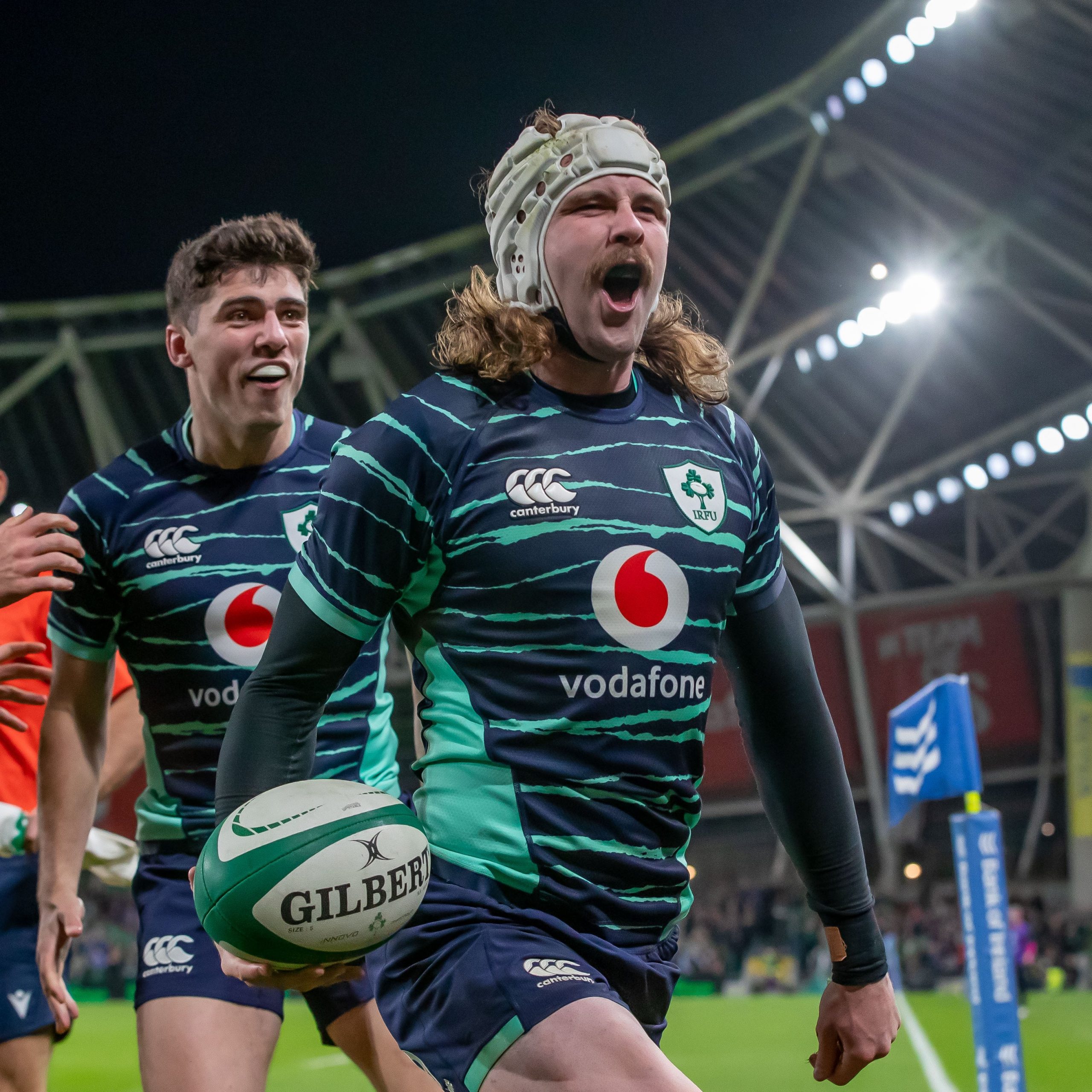 World number one, Ireland, defeated the world champions, South Africa, 19-16 in a thrilling game at the Aviva Stadium on Saturday evening.

Flanker Josh Van Der Flier and winger Mack Hansen scored in the same corner in the space of five minutes to send Ireland on their way to victory in their first game of the Autumn Nations Series.

The battle of two of the best in the sport went to the wire as both teams enjoyed periods of dominance throughout the 80 minutes.

South Africa dominated possession in the first half after conceding the first three points of the game, but the team were left frustrated time and time again as Ireland matched their intensity.

Multiple 22 entries from the Boks came to nothing throughout the half and the performance of Johnny Sexton’s opposite man, Damian Willemse, left much to be desired.

Ireland registered 46 tackles in the first 12 minutes of the game, as opposed to their opponents’ nine, but the side slowly started to unlock their expansive attack throughout the opening 40.

Furthermore, South African full-back Cheslin Kolbe saw himself on the sidelines for ten minutes after committing to a dangerous tackle on Mack Hansen.

Full-back Hugo Keenan was hit hard by winger Makazole Mapimpi to stop a potential try-scoring opportunity while hooker Dan Sheehan came close to getting a try as well.

However, it took Ireland 33 minutes after their first score to get their second, another kick from the boot of Sexton.

Munster veteran Conor Murray looked to have pulled a muscle in the lead-up to the penalty and was forced off on his 100th cap as a result.

The introduction of Ireland’s regular starting scrum-half Jamison Gibson-Park saw an attack that was in need of pace receive the perfect dosage.

It was JGP’s first match of the season and it did not look like it – the Leinster man dictated the game for the next 30 minutes.

South Africa’s kicking duties were handed over to Cheslin Kolbe for their half-ending penalty but that was to be the only goal attempt he succeeded at.

Tighthead prop Tadhg Furlong joined the growing list of Irish injuries at half-time, but his replacement was another fine example of Irish depth

Connacht’s Finlay Bealham dominated the Springbok scrum at a crucial time in the game and the momentum Ireland had gained early in the second half decided the game.

A lineout maul from the home side saw Van Der Flier squeeze in to score and an expansive attacking move moments later that included all replacements mentioned climaxed with Hansen in the same corner.

Sexton failed to convert both kicks but Ireland had done considerable damage to the Boks – so much so, that their gameplan changed.

Willie Le Roux came into the side and acted as a second playmaking option alongside Willemse, while scrum-half Faf de Klerk also entered the fore.

This attacking change by the Boks saw the momentum of the game shift and the Boks returned to Ireland’s 22 time and time again.

This time they made it count – Franco Mostert and Kurt-Lee Arendse helped Jacques Nienaber’s men chase down the hosts.

But, what separated the sides, in the end, was one penalty – Sexton slotted the ball between the posts in the middle of the two Springboks tries.

Kolbe, like Willemse earlier, could not convert his kicks on both occasions and the Irish did what was necessary to close the game out.

Ireland earned their third victory in a row with this win and the side’s credentials only get more impressive as we near the Rugby World Cup in France next September.

This is the second time the national team have beaten the reigning world champions a year out from the competition, and the pair are destined to meet again in Group A.

A Fiji side that provided Scotland with some problems awaits the Irish next week in their next match in the series.