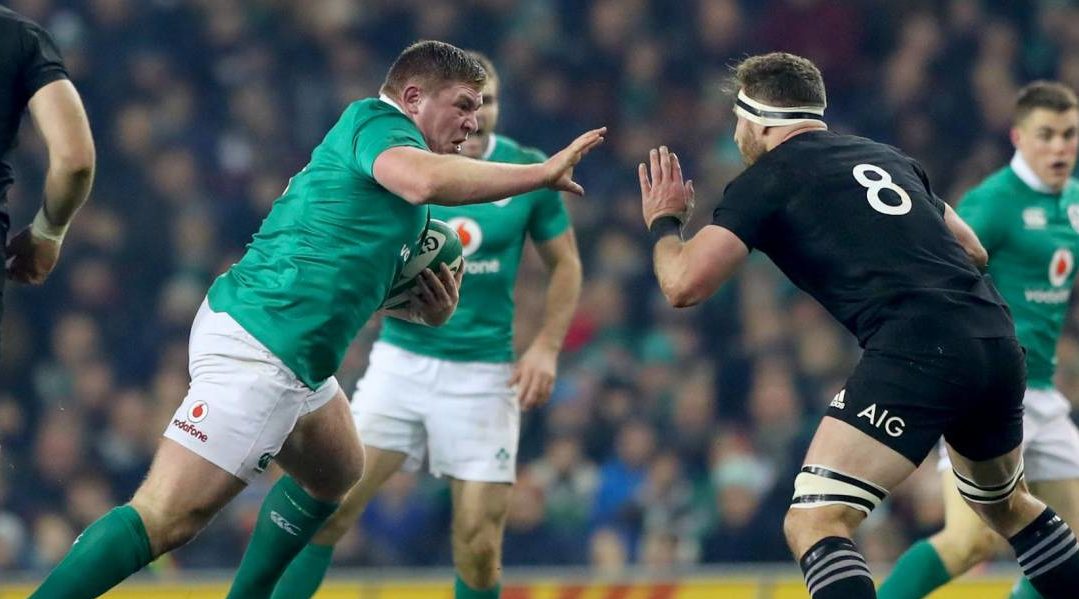 It was a game to savour as Ireland came out on top in a pulsating game to record a famous win against New Zealand in a jam-packed Aviva stadium.

Ireland were deserving winners putting in excellent displays all over the field. To a man they were in inspired form with New Zealand having no answers to the Irish side.

Rarely has an Irish team produced such a high-quality and high octane performance with Andy Farrell’s men producing a different level to any other performances under his reign with Ireland coming out on top all over the field.

The away side could have little to complain about as Ireland impressively registered only a third win from 33 meetings against their opponents.

The score-line could have been more convincing for the home side but missed several chances in the first half, but were not to be denied after a brilliant second half.

Ireland dominated the first half but remarkably went into the break losing by five with the men in green missing chance after chance.

The opening exchanges were frantic with the intensity in the tackles made it hard for both teams to settle into the game.

New Zealand had the first real chance of the game in the 10th minute, after a beautiful cross field kick found Will Jordan who was unable to get over the line with Ronan Kelleher coming away with the ball, saving an inevitable try.

After a high tackle on Johnny Sexton – Codie Taylor was lucky not to get a red card but instead, he was shown a yellow.

From the resulting penalty Ireland went to the corner, and from there they kept the ball patiently and spread the ball out wide with Hugo Keenan setting up James Lowe to go over the line to get Ireland’s first try. Johnny Sexton then failed to score the conversion.

Ireland were sloppy after the restart gifting New Zealand with a penalty with Jordie Barrett scoring the penalty to reduce the deficit with the score at 5-3.

After great work in the scrum, Ireland were awarded another penalty and yet again Sexton went to the corner, but the All Blacks held firm resulting in a penalty with Ireland coming away with nothing from the promising position.

Ireland were now dominating proceedings but they weren’t converting their possession on the scoreboard.

Ireland then thought they had their second try of the day, after more great work from an attacking line-out resulting in Tadgh Furlong been denied by the TMO for a double movement.

Against the run of play, after been under the cosh for so long, New Zealand broke away from a line out with Codie Taylor going over for New Zealand’s first try and now some how they were in the lead 10-5 after the conversion was converted.

Ireland now were shell shocked after dominating proceedings to find themselves behind on the scoreboard.

Ireland’s line out was working a treat, with Sexton deciding to go to the corner after another penalty was awarded for a high tackle, and after 16 phases, Ireland were denied yet again, with Sexton coming ever so close but the stoic New Zealand defence held firm once again.

Just before half time for the fourth time in the game, Ireland turned down the three points and went to the corner yet again but, unfortunately, for them New Zealand won the line out which ended the proceedings leaving Ireland kicking themselves for missed chances.

After dominating for the majority of the half, somehow the men in green were left kicking themselves after spurning several guilt edge chances. Would these cost the home side?

Ireland started the second half on the front foot and within three minutes of the restart, after great play by Ireland ended with Ronan Kelleher going over the line for a deserved try. Sexton missed the conversion to leave the teams level at 10-10.

Ireland went ahead in the 50th minute after man of the match Caelan Doris jinked passed the New Zealand defence to go over the try line and Ireland had their third try. Sexton nailed the conversion giving Ireland the lead 17-10.

Ireland now sensed blood with the away side on the ropes and Sexton put ten between the teams after scoring a penalty with Ireland nearing a famous result.

As all world class teams do, New Zealand responded with Will Jordan going over for the All-Blacks and now the game was in the melting pot.

After been dominated all over the field for much of the game they now were within three points of Ireland.

The next score was crucial, and it came via a Joey Carbery penalty who was only on the field a few seconds after Sexton went off for a HIA injury, now Ireland led 23-17 with 15 minutes to go.

Ireland’s hearts were in their mouths soon after, when Akira Ioane went over the try line but he was denied with a forward pass in the build up, but it went back for the penalty to New Zealand.

Jordie Barrett knocked over the penalty to leave it a three-point game to ensure a nail-biting finish.

Ireland were to score next after great work from James Lowe led to a penalty from the half way line with Carbery nailing it to put Ireland six ahead with six minutes left.

Fittingly, Ireland had the last say in this match as New Zealand were penalised for not releasing the ball after great work from Peter O’Mahony, with Carbery scoring the penalty to record a famous win in the Aviva Stadium.