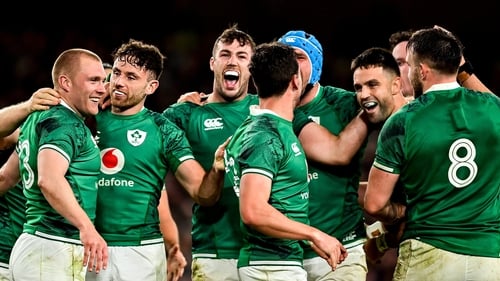 Ireland ended their Autumn series on a high with another impressive victory against Argentina to make it three wins from three.

The away side did everything in their power to spoil the party but missed chances in the first half cost them dearly as Ireland’s clinical edge was the difference.

Ireland weren’t at their fluent best for periods of the first half like last weekend but their ability to turn their possession and dominance into tries was the difference.

Argentina stunned the home crowd into silence in the first three minutes as Mateo Carreras going over the try line to give Argentina the early lead.

Ireland soon responded with a penalty from Joey Carbery to leave four between the teams after an explosive opening six minutes.

Three minutes later Ireland had another penalty, but this time Carbery went to the corner for the line out which worked a treat with Josh Van Der Flier going over and now Ireland led 10-7 after conceding the early try.

Argentina were now guilty of giving away penalties with Carbery electing to go for the touch line and from the resulting line out Ireland went over for their second try from Andrew Porter with Carbery scoring the conversion.

Ireland were now getting so much joy from the line outs with the away sides ill discipline causing them all sorts of problems.

Minutes later, Emiliano Boffelli had a penalty right in front of the post but somehow pulled his kick wide to let the home side of the hook.

Bofelli had a chance to redeem himself soon after but yet again missed another opportunity but Ireland weren’t punished for giving away easy penalties.

The chances kept on coming for the away side as Mateo Carreras broke free but unluckily for him he lost control of the ball just before the try line.

Ireland now were lucky to be still ahead after two kickable penalties and a possible try for Argentina were missed.

The missed chances burst Ireland into a response with great work from Robert Baloucoune ended up with Caelan Doris using his power to get over the line with the score line flattering Ireland after been on the back foot for much of the half. Ireland led 24-7 going into the break.

Argentina started the second half on the front foot, getting two penalties and they went for the line with both but again from the attacking line-out the Irish defence turned over the ball and the away side came away with nothing after their early dominance after the restart.

In the next passage of play the away side were reduced to 14 as Pablo Matera was sin binned due to a deliberate knock on with Carbery kicking over the penalty to put the score-line to 27-7.

Ireland finished off the contest in the 57th minute with Josh Van Der Flier going over for his second try of the day with Ireland now in firm control 34-7.

Argentina’s misery was compounded when Tomas Lavanini was sent off for a reckless tackle on Cian Healy.

Ireland were now in cruise control as the next try of the day came from Dan Sheehan after another attacking line-out ended in a try as Ireland continued to dominate in the air.