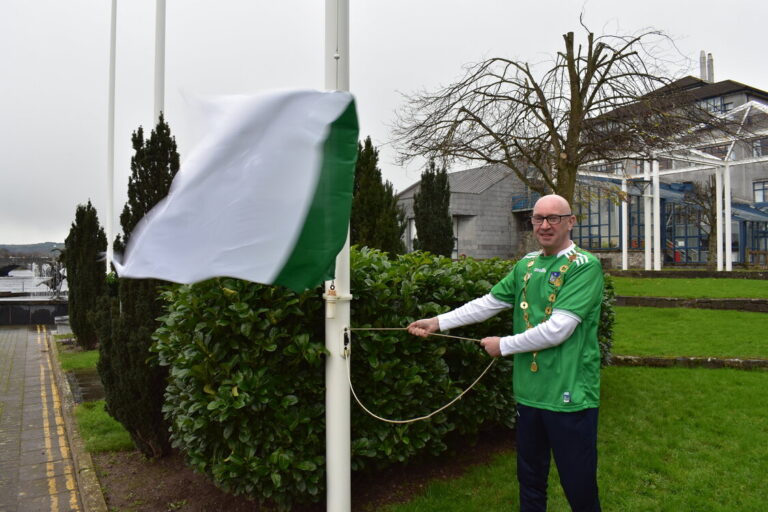 Mayor Micheal Collins has urged everyone in Limerick, city and county, to get their green on to show their support of the Hurling team on the run-up to the All Ireland finals on Sunday, December 13th in Croke Park.

Mayor Collins stated, “the Senior hurlers have all given us such a great lift in their matches since the resumption of the games, winning the National League, Munster Championship, and now one step away from the All-Ireland title!”

“It is an unusual time to be anticipating and acknowledging a build-up to an All Ireland final, but I am asking Limerick supporters who can show their support by dressing their homes and businesses  in green.”

The ‘Greening’ of Limerick, so far, both city and county are flying Limerick flags at main entry points to the town, the Thomond bridge and the Shannon bridge.

Over the week, Limerick city and county put up one hundred large ‘Good Luck’ flags.

Green and white bunting and flags are flying at the council headquarters at Merchants Quay, Dooradoyle and district offices, all to help heighten the atmosphere before the match.

The floodlit council buildings are sporting green bulbs. Flags are waving on Limerick city bridges, O’Connell street and Colbert station, along with other locations in the city and essential towns will all be turned out in green.

The game between Limerick and Waterford looks like a winner.