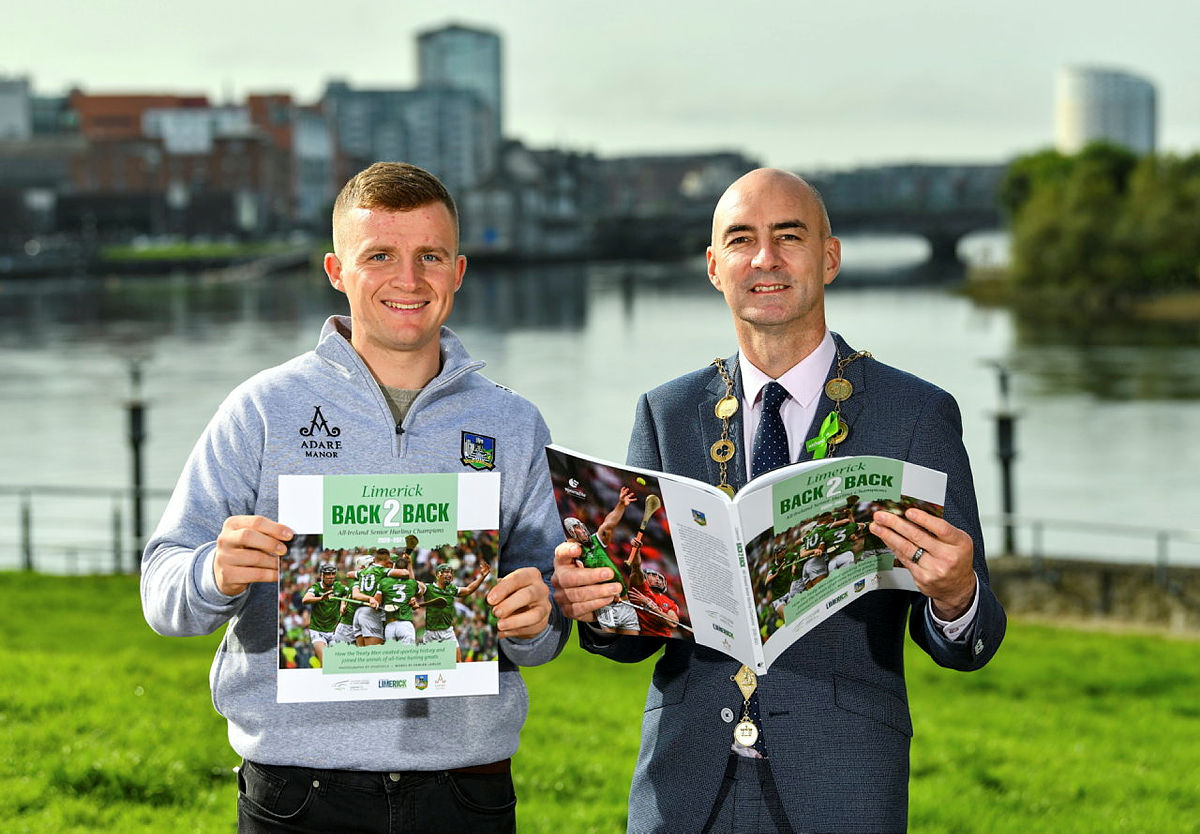 Limerick hurler Peter Casey, left, and Cllr Daniel Butler, Mayor of the City and County of Limerick, in attendance at the launch of 'Back 2 Back' at Limerick City and County Council offices at Merchants Quay in Limerick
Share
Tweet
Share
Share
Email
Comments

A stunning photographic memoir chronicling Limerick’s All-Ireland hurling success in 2020 and 2021 has been unveiled today with the launch of ‘Limerick Back 2 Back’.

Produced by the country’s leading sports photographic agency, Sportsfile, the superb pictorial parade that tells the story of this unforgettable period for Limerick hurling fans was officially launched by Mayor of the City and County of Limerick, Cllr Daniel Butler.

Sponsored by Limerick City and County Council, the 168 page book is made up of images captured by Sportsfile’s team of photographers as they followed Limerick as they regained the Liam MacCarthy Cup in an unusual and fan-free Croke Park in December 2020, and then retained the title in the summer of 2021.

The book produced in conjunction with celebrated GAA writer Damian Lawlor and endorsed by the Limerick County Board, the book is on sale from tomorrow at all usual outlets and online and is priced at just €19.95.

This new book is a wonderful companion to the Treaty Triumph book published in 2018 celebrating Limerick’s first All-Ireland Senior Hurling title in 45 years.

Mayor of the City and County of Limerick Cllr Daniel Butler said: “We are in the middle of a golden period for Limerick hurling at present and we are so grateful to the panel and management for their skill, drive and commitment which are the envy of the country.

“Their hard work and dedication has resulted in three All-Ireland’s in four years with back to back victories in 2020 and 2021.

“These victories have given the people of Limerick enormous joy and delight, coming especially in a time of confusion and uncertainty. This new book is a fantastic memoir to have and peruse.

“The skill and poise of the Limerick players is expertly captured by the Sportsfile photographers, allowing us to relive those wonderful times once again.” Finished Mayor Butler.

Ray McManus, founder of Sportsfile was also in attendance at the launch.

He said: “Back 2 Back is the culmination of two years’ work and we hope it quantifies in pictures and words the amazing effort of the Limerick panel in achieving back to back victories.

We are especially grateful to the Mayor and Limerick City and County Council for supporting Limerick Back 2 Back as the Council’s support will allow the book sell at a very competitive price, €19.95.”

Limerick Back 2 Back is available from all good bookshops and online from sportsfile.com