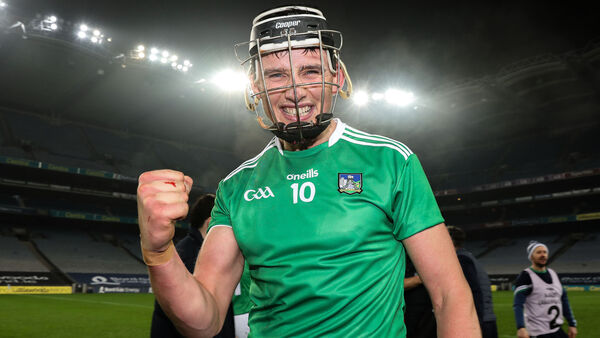 Gearóid Hegarty was crowned Hurler of the Year as Limerick won nine awards at the 2020 PWC All Star Awards.

Hegarty becomes just the second Limerick man to receive this accolade, after Cian Lynch picked up the biggest individual award in hurling two years ago.

He shot seven points in the All-Ireland hurling final against Waterford as Limerick secured their second All-Ireland title in three years with the wing forward earning himself the Man of the Match award.

Nickie Quaid won his first All-Star award as he was rewarded for his consistent displays during the 2020 campaign.

Seán Finn was named in the All Star team for the third year running, joining Ciarán Carey, Eamonn Cregan and Leonard Enright on three All-Star awards.

Despite Mike Casey’s injury, Limerick were able to not concede a goal in either the All-Ireland semi final or final with Dan Morrissey being recognised for his role at full back.

Diarmaid Byrnes and Kyle Hayes were picked as wing backs in the team with both men receiving their first All-Star award.

Hayes was named Young Hurler of the Year in 2018 but was not selected in the Team of the Year.

Limerick claimed a clean sweep of awards in the half forward line with Hegarty, Cian Lynch and Tom Morrissey all claiming awards.

Lynch claimed his second award while Ahane’s Tom Morrisey picked up his first.

Aaron Gillane became the ninth Limerick player to be recognised as the sharpshooter secured his second successive All Star award.

Galway’s Daithí Burke completed the full back line alongside Finn and Dan Morrissey while Tadhg De Búrca lines up alongside Diarmaid Byrnes and Kyle Hayes.

Jamie Barron and Tony Kelly were named in midfield while TJ Reid and Stephen Bennett were named alongside Aaron Gillane in the full back line. Bennett received the 1,500th All Star award on what was another historic night for Limerick hurling.