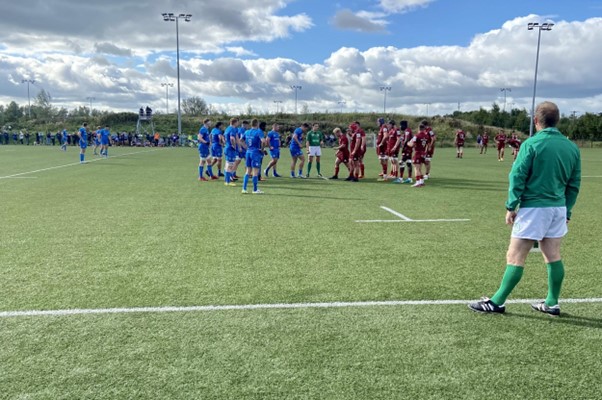 The Munster Development suffered a heavy home defeat to provincial rivals Leinster ‘A’ at the weekend.

The Munster Development squad were kept scoreless in the second half against Leinster ‘A’ as they fell to a 43-12 home defeat at the University of Limerick.

The Cian Hurley-captained Munster side began the game strong, defending their own line successfully before championing a promising visit to their opponents 22 in the opening minutes.

Yet it was poor discipline from both teams which kept either side from scoring in the game’s opening quarter.

This was until The Stags’ out-half Tony Butler was bested in the air by his opposite number to lead to the opening score, in favour of the away side.

The visitors struggled to exploit the space they created by their set piece until a penalty opened the door to Munster territory.

Leinster would cross over again when a penalty conceded from a handling error saw them engineer a dominant maul which rumbled over the red’s line.

Munster would strike back with their first try of the game, a great team try created from a number of pick-and-goes that eventually saw the ball wrestled over the Leinster line. Out-half Tony Butler added the extra points with an impressive kick through strong winds.

The home side remained aggressive with a superb offloading exchange from the Munster second-rows saw back-row Brian Gleeson gallop into Leinster’s territory.

The ball stayed in the Leinster half until captain Hurley got his team’s second try but Butler left the extra points behind when his conversion attempt passed outside the posts.

Yet it was Leinster that won the last score of the half from open play, with the blues stringing together a number of productive phases, their outside centre spotted a narrow gap to crash over the Munster whitewash.

The nine-point deficit seemed able to be overturned but the second half saw a decline in both discipline and skill, as a number of penalties and errors from both sides made it difficult to stay on plan.

A Leinster scrum inside the Munster 22-metre line set the stage for Leinster’s first try of the second half and widen the gap, which the home side failed to narrow down.

The Red Army managed to conjure two visits inside Leinster’s 22 but left empty-handed both times, with their second visit ending with the ball held-up on the Leinster line.

The opening minutes of the second half saw the substitution of captain Cian Hurleyp and second-row partner Eoin O’Connor and their omission from the rest of the game was a momentum killer for the home side.

Leinster continued to thrive in the chaos, bagging two more tries and a before the sound of the final whistle – most of the half was played in Munster’s danger zone.

The Leinster forwards scored that final try via a maul over the Munster try line in the last play of the game, underlining their second-half dominance and ending proceedings on an agonising low for Munster.