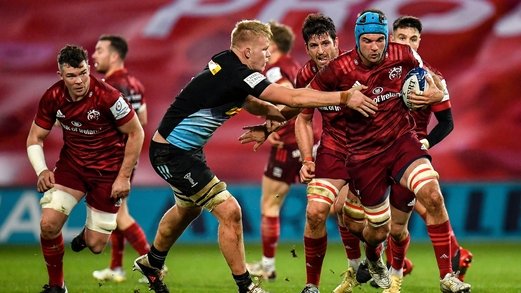 Munster secured a 21-7 victory over Harlequins in what proved to be a tough battle in Thomond Park.

Despite not being at their free floing best Munster came out on top against an ill-disciplined Harlequins side. Johann Van Graan’s men will need to produce an improved display away to Clermont next Saturday.

After a cagy opening 10 minutes Munster won a penalty just outside the 22, which JJ Hanrahan duly slotted over to open the scoring.

Harlequins struggled to convert their opportunities, missing two penalties as they also saw a try disallowed just after for a forward pass in the build-up.

James Cronin won a penalty against the run of play for Munster which Hanrahan converted to extend the home sides lead.

Directly from the kick-off Tadhg Beirne broke through the Quins defence. This led to Quins flanker James Chisholm receiving a yellow card for a cynical foul to stop the play. Hanrahan missed the extras just before the break.

The home side levelled up the number of players on the pitch early in the second half when Danny Care took a quick penalty, Stephen Archer stopped him illegally and received a yellow card in the process.

Just after Quins got 15 back on the pitch, they conceded the first try of the game. The home side kicked a penalty into touch and after the maul was illegally brought down referee Pascal Gauzere awarded a penalty try and yellow carded Will Evans from Quins.

Quins finally managed to get on the scoreboard through winger Cadan Murley who managed to break a tackle on the wing and touch the ball down. Smith added the extra two.

With the game in the final quarter Quins captain Alex Dombrandt hit Munster fly half Ben Healy late which he got a yellow card for. Healy knocked over the penalty from well inside his own half.

The home side made the extra man count as they scored their second try with Gavin Coombes crossing the whitewash on his debut for his seventh try in eight games. Healy missed the extras as Munster secured an opening round victory.