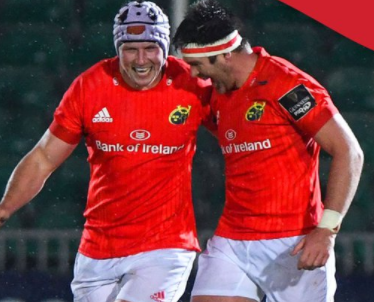 Munster struck late to seal a bonus point win away in Scotland as they made it six wins out of as many games in the Pro14.

Johann Van Graan’s men hit the ground running with an early try from Billy Holland, with Healy adding the conversion.

From the resulting kick off, the home side won possession back and went on the attack, with the ball eventually ending up in Glenn Bryce’s hand who crossed for the Scottish side with the conversion was missed.

Brandon Thomson landed a monster penalty from the halfway line moments later to give the home side the lead.

It was almost like deja vu in the 31st minute. Munster had a lineout 5 metres from the try line. They mauled the ball over the line with Fineen Wycherley crossing the whitewash. Healy missed the subsequent conversion.

The away side notched the opening points of the second half through Ben Healy with a long-range penalty.

After a sustained period of pressure by Glasgow close to the Munster line they eventually managed to cross with Grant Stewart notching the score after sustained pressure. Thomson missed the conversion.

During this period Munster captain Billy Holland was sin-binned for continuous infringements close to the line.

Munster’s Gavin Coombes managed to get over the line for the second time in as many games after Munster went through the phases. Glasgow captain Wilson had also been given a yellow card in the lead up to the try. Healy then landed the extra two points.

Munster managed to get a bonus point try right at the end of the game from another rolling maul. Jean Kleyn eventually came off the side of to drop over the line to end the game as a contest. Hanrahan missed the extras but it mattered not as Munster picked up another impressive victory.