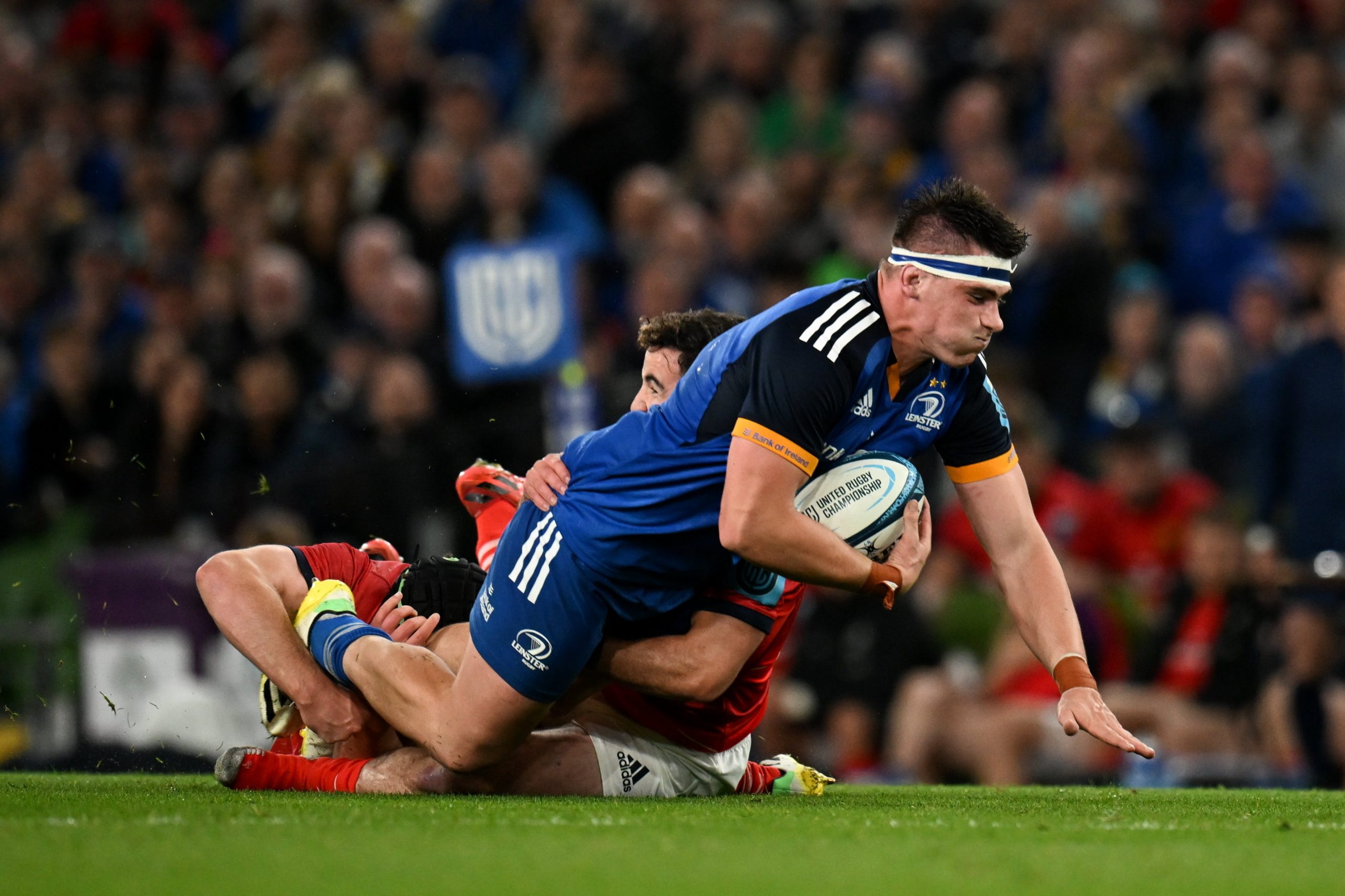 Munster fell to their fourth defeat this season when unbeaten rivals Leinster won 27-13 at Aviva Stadium on Saturday evening in the BKT United Rugby Championship.

The Stags looked poised to challenge the side they have only beaten once in 10 games but it was not to be as injuries piled up throughout the match.

Their defence inside their own 22 was exceptional in the first half despite two forwards, Keynan Knox and Jena Kleyn, finding themselves on the sidelines temporarily.

On top of this, a slender deficit at halftime was turned into a surprise lead when Liam Coombes crossed the whitewash 46 minutes in.

However, it was not to be as Leinster found their flow in attack and Munster relinquished their lead just minutes later, never to regain it.

The game started as a cagey one for both sides but Leinster looked the more venomous of the two in attack.

Yet, it was Munster who found their way in front via out-half Joey Carbery’s boot 20 minutes in as the side cashed in on all their defensive efforts in the opening quarter.

Munster continued to withstand Leinster’s waves of pressure but tighthead prop Keynan Knox saw yellow and this opened the doors for the eight-time league champions to get what they deserved.

Flanker Scott Penny was the man to earn the credit for doing so after a scrum saw his side move close to the try line and opened the door for him to push them that inch further.

However, Munster did not let such a score deter them and Knox’s fellow prop Jeremy Loughman proved his worth with some inspired scrummaging at both loosehead and tighthead throughout the game.

Loughman, who was called up to the Ireland squad for the upcoming internationals in November, backed up this confidence in him with a brilliant, flexible performance.

Carbery added three more for the away side before Knox returned but second-row Jean Kleyn suffered a similar fate to his teammate after a TMO check led to his temporary removal from the game.

Munster finished the half with 14 men after surviving another part of the Leinster onslaught and started the second half with the same amount of personnel on the pitch.

Fortunately, the Coombes cousins made up for the missing man in the XV as they combined to get Munster’s only try of the game.

Winger Liam received an impressive pass from back-rower Gavin and crossed the whitewash while Carbery took his chance at an extra two points to take back to their half for the restart.

Kleyn returned but soon left the pitch permanently with an injury and the game started to go downhill for Graham Rowntree’s team.

Ireland hooker Dan Sheehan got a sixth try of the season on the 50-minute mark after terrorising the Munster men in the first half.

Leinster regained their lead when Sexton directed his conversation between the posts and they never looked back, while the Red Army’s fortunes faded.

Carbery went off injured and Leinster added another try through number nine Luke McGrath as the game slipped through Munster’s fingertips.

Liam Coombes and forward Jack O’Sullivan added their names to the injury list and Munster grew desperate in this crisis.

The team’s desperation could not translate itself into points despite several visits to Leinster’s 22 and prolonged periods in possession.

The final nail in the coffin was hammered in two minutes from time when winger Rob Russell got the men in blue the bonus point try that Munster came so close to preventing.

Another fourth quarter went by for Munster this season without a score but their defence was what stood out this week.

Despite another loss to a provincial rival, a clearer picture is being created of what the Stags are trying to do, but it is yet to reach the desired quality.