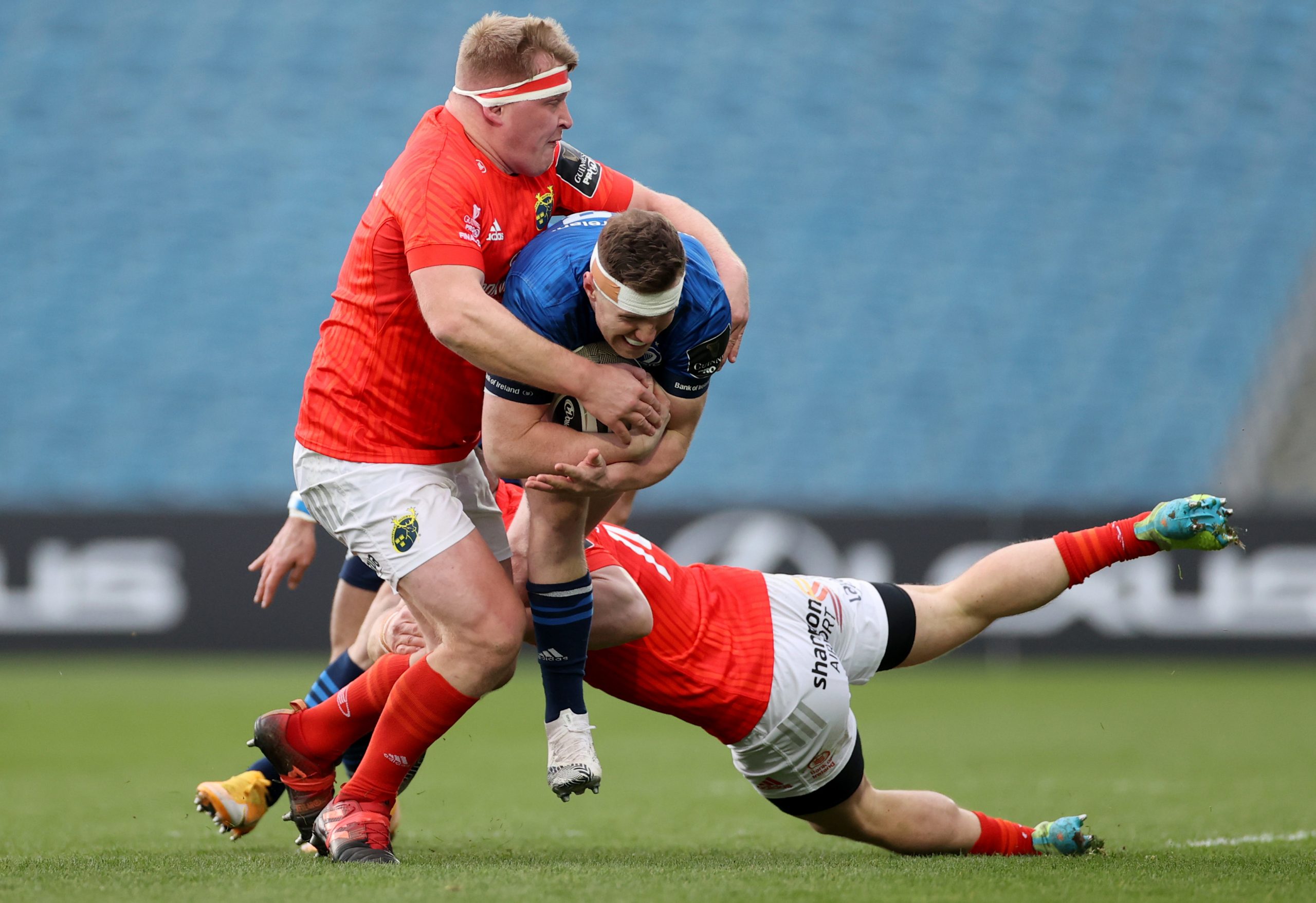 Leinster continued their recent domination of Munster as they secured their fourth Pro14 title in a row by overcoming their arch rivals 16-6.

In truth the score line flattered Munster on a day when their spirit and resolve was no match for Leinster’s relentless pressure.

Leo Cullen’s men were guilty of squandering numerous guilt edged chances to cross the Munster try line and should have won by a greater margin.

With the focus on CJ Stander and Billy Holland’s retirements at the end of the season, Munster supporters hoped their province would be able to defy the odds as they have done so often in the past.

However, Leinster dominated this game for large spells with their physicality and power not allowing Munster build momentum in attack.

Leinster put the pressure on their opponents straight from the start with Ross Byrne’s first kick leading Conor Murray to be bundled in to touch inside his own ’22.

The Munster defence stood up to the task but Leinster’s patience in attack eventually led Peter O’Mahony to go off his feet at the breakdown with Ross Byrne, starting in place of Johnny Sexton, slotting the early penalty.

Munster’s first attack ended with a Stander forward pass and from the resulting scum Leinster managed to progress in to Munster territory through Robbie Henshaw and Dave Kearney before Ronan Kelleher’s line break brought Leinster inside their opponent’s 22.

However, the Leinster pressure was relentless and despite a thunderous Chris Farrell hit on Ross Byrne, Leo Cullen’s side earned a penalty to move six points clear.

Munster needed to reply and they were given a helping hand when Rhys Ruddock entered the side of a ruck which handed Carbery a straight forward penalty.

Leinster’s back three proved menacing throughout and some swift hands in midfield led Jordan Larmour to break in to Munster territory. However, the men in red’s defence stood up to the task and a breakdown penalty gave them the platform to attack.

However, Munster coughed up possession 10 metres from the Leinster line despite some excellent play by Damien De Allende and Mike Haley in the build-up.

Leinster looked threatening every time they attacked with Robbie Henshaw dictating proceedings in midfield. His offload helped Dave Kearney kick in behind with Haley reacting quickly to diffuse the situation.

The reigning Pro14 champions almost breached the Munster line after a pre planned move at the lineout led Ronan Kelleher to surge clear but O’Loughlin’s pass to Larmour was poor and the chance went abegging.

They did get an opportunity with Munster knocking on prior to the misplaced pass and from the resulting attack Scott Fardy crossed the try line but the back rower was held up over the whitewash.

Leinster continued to stretch the Munster defence but Josh Van Der Flier was penalised for obstruction with the penalty leading to a roar of delight and relief from Munster.

On the half hour mark, a searing Hugo Keenan break and offload to Henshaw brought Leinster within five metres of the Munster line but they coughed up possession to Earls.

The relatively quiet Stander earned his side a turnover with Conor Murray’s long range kick at goal drifting wide of the posts. A Gavin Coombes line break from the subsequent restart went to waste with Earls held up in the choke tackle.

A Carbery penalty against the wind hit the post moments later but the out half atoned for that miss when he added an extra three points after a high challenge on Murray with the sides level at the interval.

Similar to the opening half, Leinster started on the front foot, winning a scrum penalty before a maul brought them inside the Munster ’22.

A series of forceful caries from the pack led to be held up over the line. The Leinster pressure was ferocious and eventually Jack Conan burrowed his way over the line with Byrne adding the extras.

To add to Munster’s woes, O’Mahony was forced to limp off with Jack O’Donoghue entering the fray.

Johann Van Graan’s men began endured a nervy start to the concluding half with a Carbery restart going out on the full and Murray coughing up a penalty on halfway.

Leinster continued to dominate territory as they began to crank up the pressure on the Munster scrum. Replacement Tadhg Furlong helped earn Leinster a scrum penalty but Byrne missed the penalty. Remarkably this was Byrne’s first missed penalty in this year’s Pro14.

Johnny Sexton came off the bench on the hour mark with Leinster’s embarrassment of riches on full show.

Munster enjoyed a period of pressure with a powerful Dave Kilcoyne carry helping Munster progress in attack but a Jean Kleyn knock on summing up their difficulties in attack.

Leinster continued to look menacing in attack with Conan breaking in to the Munster 22 after a miscued Murray box kick.

Despite Munster’s defence holding firm, the four in a row Pro14 winners earned a penalty which Byrne slotted.

Munster could not find a response to the Leinster onslaught as Leo Cullen’s men were crowned champions once again.