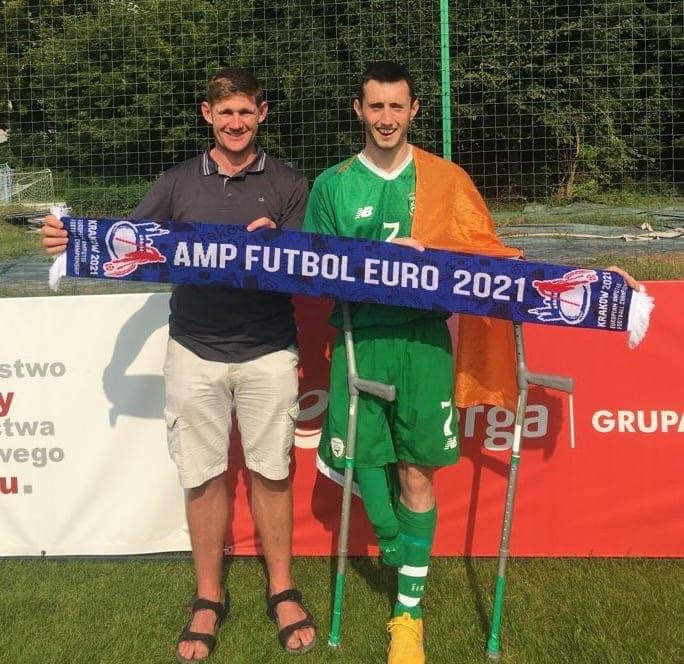 Everyone has a story to tell, some are happy, some are sad, some are successes, and a lot are failures but there is nothing more refreshing than hearing about someone overcoming their difficulties in life.

One such man is Patrick Hickey who hails from Pallasgreen in Limerick, who has overcome many obstacles in his life and has always turned the negatives into the positives.

Mr. Hickey was born with congenital femur disorder which means that his right leg is shorter than his left leg.

At the age of nine, the Limerick Native underwent major surgery and from then on, he has excelled in life including representing Ireland in the amputee soccer European Championships.

Speaking about the surgery and what it was like growing up with this condition Mr. Hickey never let it get in his way and pointed to his school friends and teachers which helped his recovery.

He said: “I got it cut (his right leg at the age of nine), I remember the days before and the days after the surgery like they were yesterday. I was in a cast from under my rib cage all the way down for 16 weeks.

“After the surgery I was a bit down as before it I was so active. My teachers helped me through it, when I look back at, I picked the school team that won a seven a side tournament around the same time.

“I have to credit my school teachers when I was in school, they left me to it. They always let me partake whenever I wanted and left me at what I was capable of doing.

“Whenever I wanted to do something in PE, the teachers never interfered. Also, I have to so say my friends and the lads in school were fantastic to me. School was a brilliant experience.”

Although Mr. Hickey found life after surgery was tough, he wouldn’t have changed his situation.

“I won’t lie it was so tough to be in a cast for 14 to 16 weeks. I remember when they took off the cast the leg was flapping around. It was tiny because the muscle had based. I remember it so well it did shape my drive.

“Coming to terms with the limb was never a major issue. If I didn’t have the operation, I wouldn’t have become a teacher so that was a positive.”

The Pallasgreen man also admitted that sport was another game changer and really kept his spirits up during his recovery.

“Sport always kept me going through the hard times. Sport was my out. I can remember back in March 2002 the Formula One started back and I got an infection.

“I got my own room in hospital and because of that I could wake up at five o clock in the morning to watch the Australian Grand Prix it was the little things.

At the age of 19, Mr. Hickey remarkably put his problems behind him and represented Ireland’s Amputee soccer team for the first time.

“In 2011 I started amputee soccer. I played for Ireland when I was 19, I didn’t realise at the time how big of an achievement it was. I played a tournament in Poland, and I was the hatchet man.

“I played midfield and left back but I was tough, if anyone asked me, I was a piano carrier rather than a piano player.”

Unfortunately, in 2014 another setback came the way of the Ireland international as he got a serious hip injury.

“In 2014 I got a couple of in injuries. I got a bad hip injury. I was on crutches without the prosthesis for about eight weeks. I eventually got back going in 2018 we won the first league with Cork City. I actually played with Ireland before Cork City was set up to keep competitive matches going.

“It was great to put on the shirt the prestige of Cork, Bohemians, Shamrock Rovers and Partick Thistle came over for Scotland is well. I’m the only player to score with all the teams in the league, they changed the rules since so no one can do that again.”

The Cork City player’s most memorable and proudest moment came in September 2021 where he represented the Ireland Amputee soccer team in the European Championships.

He netted a goal against Belgium which Mr. Hickey will never forget and will always savour the moment of lining out for the national anthem in the green shirt.

“The biggest thing for me was standing in that Ireland jersey when the national anthem came on before the matches was just really special. The fact I wore the number seven jersey made it even more special as growing up my idols would of worn the famous number seven.

“To score in the European championships was just unreal. I scored against Belgium which was so special. I have brought home the jersey from that game and it’s ready to be framed. I’m definitely going to put it all the wall at home.

“That moment will always stay with me putting the ball in the Belgium net. Overall, the experience playing for Ireland in the European Championships was just brilliant.

“Sport is my life whatever it is. I can say I lined out for Ireland in the European Championship which is fair going. It’s definitely the proudest moment in sport so far.” He finished.